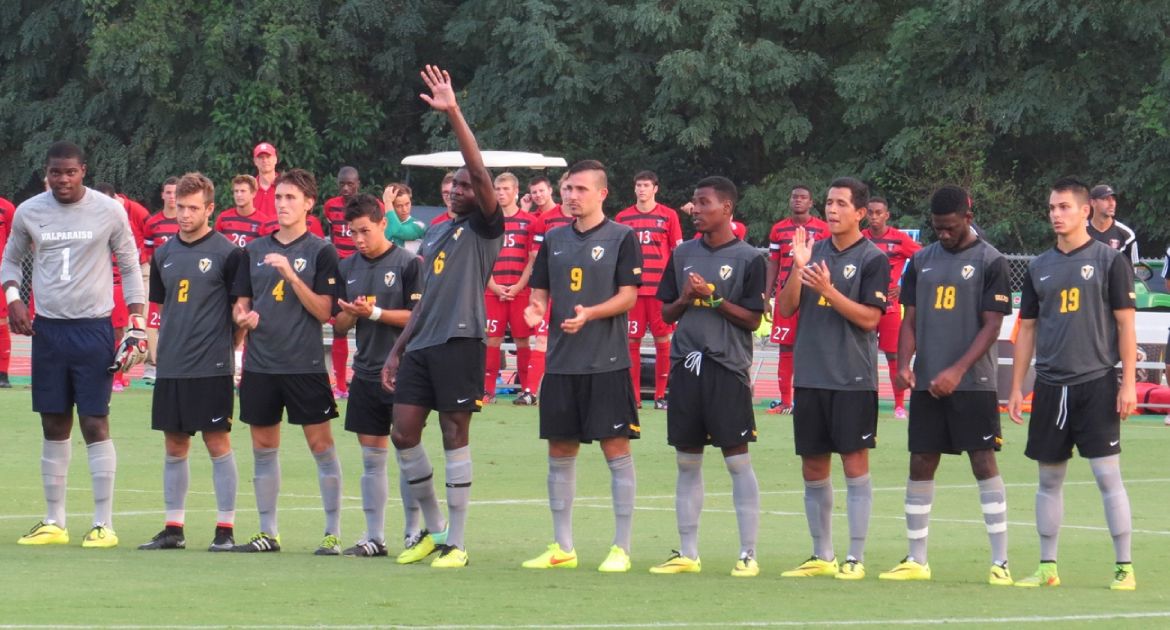 The Valparaiso Men's Soccer team lines up for their first game at North Carolina State
Valparaiso at NC State | August 29, 2014

The Valparaiso men’s soccer team opened its season Friday night with a hard-fought 110 minutes in non-league action against North Carolina State, ending the night in a 0-0, double-overtime draw.

The Crusaders had their opportunities to break open the match in the first half, out-shooting the Wolfpack, 10-6. After the half, N.C. State bombarded sophomore goalkeeper Nico Campbell (Kingston, Jamaica) with 11 shots in the second half and five in overtime. Campbell and the defense would hold their ground to preserve the shutout.

"It was a really good college soccer game tonight - exciting and well played by both teams,” said Crusader head coach Mike Avery. "We were very good at the start of the game and really should have had a goal to show for it. NC State grew into the game and challenged our defensive organization, and I thought we stayed tough and organized. The game opened up and evened out through the overtime periods, and at the end of the day a draw seems a fair result. Our challenge now is to get ready with a quick turnaround for another big road game at Davidson.  We will need our depth to step up, and I am confident that group will be excited to play."

Junior midfielder Jordan Aidoud (L'Isle d'Abeau, France) led the offense with four shots, including two on goal coming in the first overtime period.  Aidoud had a good change in the 81st minute that was stopped by Wolfpack keeper Alex McCauley. Junior midfielder Jacob Gandarilla (Albuquerque, New Mexico) had a shot on goal with three shots overall in 103 minutes of action.

Campbell ended with seven saves en route to his first shutout of the year and second of his career.

Valparaiso (0-0-1) continues its season-opening road trip, taking on the Wildcats of Davidson University in a Sunday afternoon match. Kickoff is scheduled for 3 p.m. CT, with live stats available through ValpoAthletics.com.