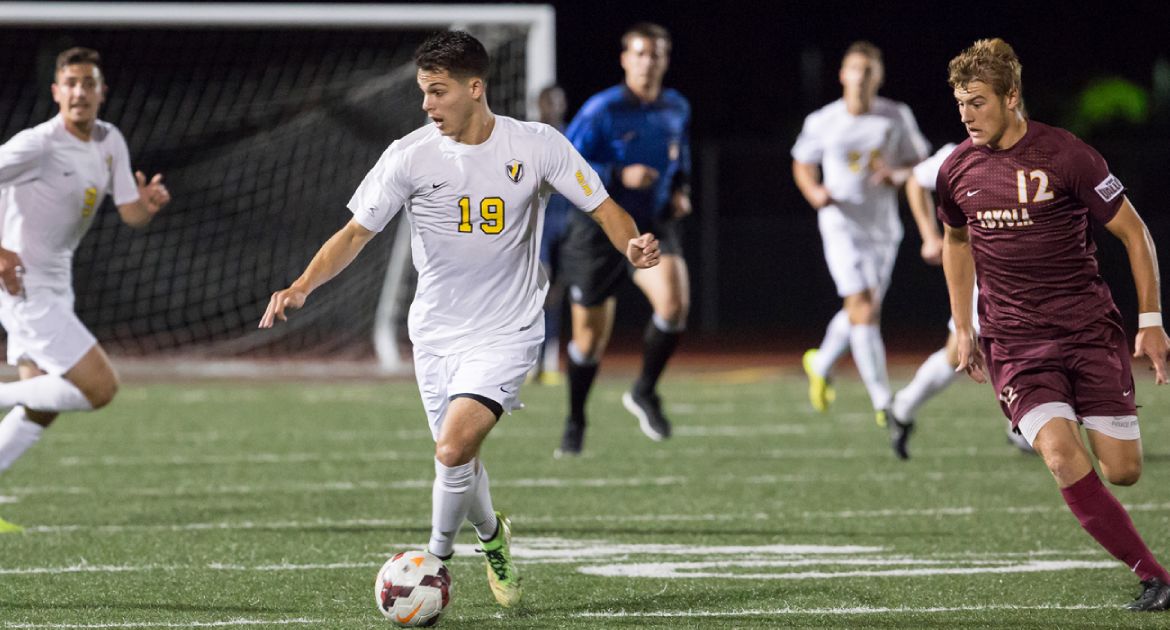 Nick Suker controls the attack for the Crusaders
#25 Valparaiso at UIC | October 01, 2014

The #25 Valparaiso men’s soccer team suffered its first loss on the road as they fell to league foe UIC in a hard-fought and physical match Wednesday night, 1-0.

The Crusaders fell behind early to the Flames, as Joel Salmeron placed one past sophomore Nico Campbell (Kingston, Jamaica/St. George’s College) in the sixth minute.

Valpo tried to respond with a goal of their own just five minutes later when senior midfielder Nick Suker’s (Downers Grove, Ill./South) shot was stopped by UIC goalkeeper Andrew Putna.

In the 16th minute, junior midfielder Jordan Aidoud (Lyon, France/CEFAM) had two shots just nine seconds apart that were both turned away by Putna. He would have another chance stopped in the 60th minute and led the Crusaders with three shots on goal.

The Crusaders had a great chance to even the score in the 62nd minute after a red card on Zack Judickas led to a penalty kick for senior captain Zev Taubileb (Malibu, Calif./Agoura). Taubileb stepped up to the line and let it rip, but was stopped by Putna.

“It was an exciting game, and congratulations to UIC for holding on to the win,” Crusader head coach Mike Avery said. “We knew this game would be a real challenge given the quality of our opponent and the rigorous schedule we've faced in the last ten days, and while disappointed with the result, I am proud of the team for putting in a good effort tonight.”

Valpo kept the shots coming at the Flames all night, registering seven shots on goal and 11 shots overall.

Campbell finished the game with three saves as his record dropped to 4-2-2.

The Crusaders (5-2-3, 1-1-0) return to the pitch next Tuesday, when they travel to Indianapolis to face in-state foe IUPUI. Kick-off is scheduled for 6:00 pm CT. Live stats will be available through ValpoAthletics.com