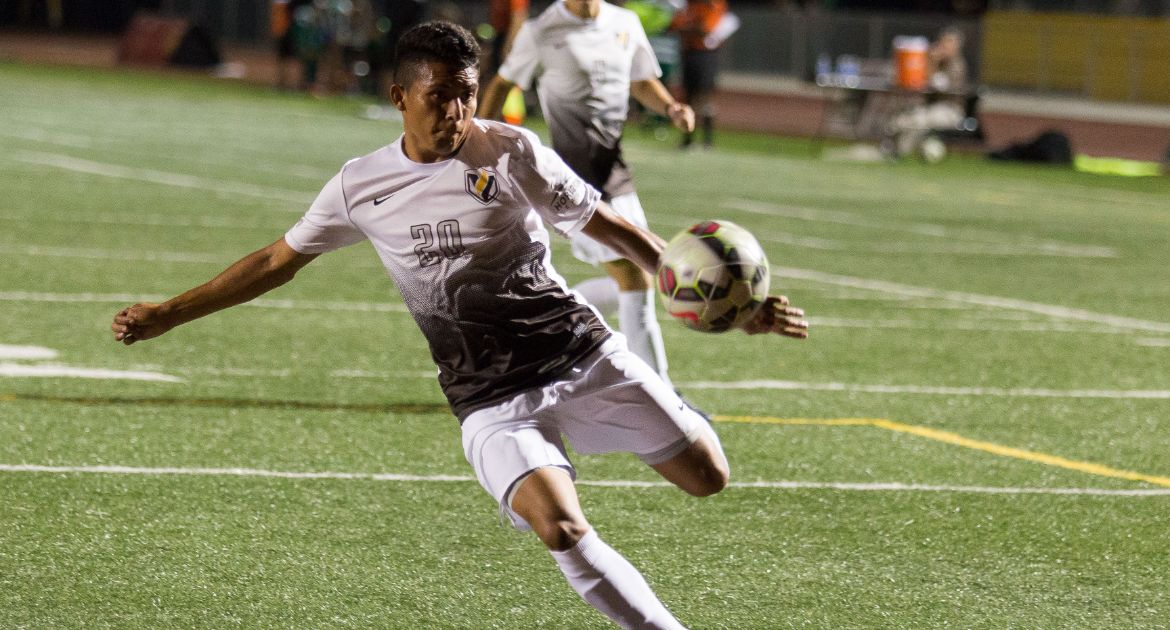 Nelson Landaverde had a shot rattle the crossbar late in the first half.
UIC at Valparaiso | October 28, 2015

“It was a difficult result for us to take tonight because I am not sure it was what we deserved, but you have to first give credit to UIC,” said Crusader head coach Mike Avery. “They are a very good team and have had a great season. We are in a position where we really have to dig in our heels and fight. I love this team, though, and I am 100% confident that you will see a committed group that will fight to the bitter end.”

Despite the weather being less than ideal with rain and wind, the Crusaders played aggressively, but could not overcome an early UIC goal. Nestor Garcia was able to gain control off a failed clearance in the eighth minute and strike it from 15 yards out inside the right post for the eventual match-winning goal.

Valpo had looks for the equalizer throughout the remainder of the first half, including a nice cross to junior Matthew Gweh (Apple Valley, Minn./Eastview [High Point]) in the 23rd minute that resulted in a diving header attempt which went just wide.

Valpo’s best scoring chances came towards the end of the first half. The Crusaders put together a tailor-made counter off a UIC corner, and one move by sophomore Stian Sandbekkhaug (Ottawa, Ont./Frisco Liberty) put him in one-on-one with UIC goalkeeper Andew Putna in the 42nd minute. Putna came out of the box in an effort to knock the ball away, but only was able to take down Sandbekkhaug with no defender behind him.

Putna was shown just yellow, however, and punched away the ensuing free kick from junior Nelson Landaverde (Santa Ana, El Salvador/Springdale [Ark.] H.S. (Neosho County C.C.)) with a nice save. Off the following corner, sophomore Ramone Howell (Portmore, Jamaica/Jamaica College) struck a shot off the crossbar, and junior Kevin Fallet’s (Takoma Park, Md./Montgomery (High Point)) attempt at a follow-up was deflected over the bar by a UIC defender. Junior Isaiah Madrid (Albuquerque, N.M./Eldorado [FGCU]) also had a solid shot at goal from just outside the box midway through the second half, forcing Putna to come up with another save.

“On another night where Mother Nature was having her way with the ball as the wind made the game a challenge for both sides, a game is often decided by which team can capitalize on an error,” said Avery. “UIC was able to do that in the first half as a mis-cleared ball fell to their attacker who finished it well. Our chances also came, but we hit a cross bar or their goalkeeper came up with enough of a touch to keep us off the board. It would be easy just to say "unlucky", but we have to take responsibility to finish and also credit their GK and defenders on a good night.”

In an even match statistically speaking, Valpo out-shot UIC (8-4-3, 5-0-2 Horizon) 13 to 12, while UIC enjoyed a 4-3 edge in corner kicks. The Flames put six shots on goal to two for the Crusaders, however. Nico Campbell (Kingston, Jamaica/St. George's College) recorded five saves for the Crusaders on the night, while Putna stopped the pair of Valpo shots on goal.

Valparaiso (6-5-5, 2-2-3 Horizon) will be back on the road Saturday night for the last road match of the regular season, when they take on Oakland at 6 p.m. CT.  Live stats for the match will be available via ValpoAthletics.com.

“Saturday night becomes an even more important game, so we will do our best to recover and prepare,” said Avery. “Oakland is the defending league champion, but they are also needing some points to solidify a playoff spot, so I expect it will be another hotly contested Horizon League game.”