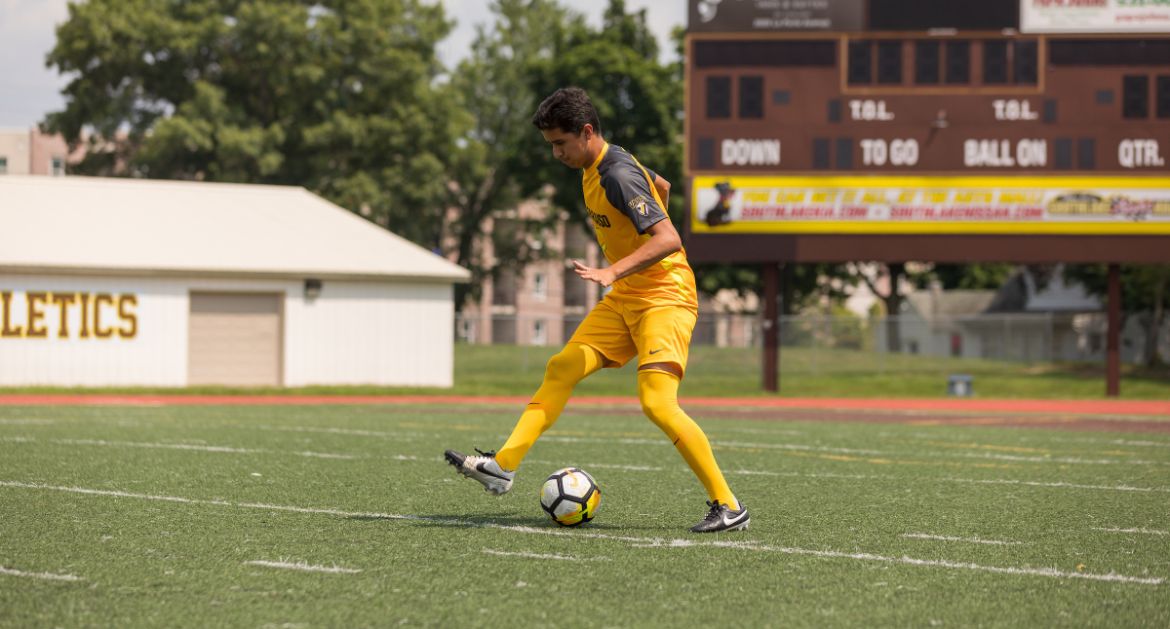 This Week in Valpo Soccer: At long last, the Valparaiso University men’s soccer team returns to Brown Field for Saturday’s match against Western Illinois. This marks the first home fixture for Valpo since Aug. 24. Saturday presents the team with a chance to improve to 2-0 at home and an opportunity to win back-to-back games for the first time this season.

Previously: Valpo pulled out a 1-0 road win over Milwaukee last week thanks to a 90th minute goal by Alex Brown that featured assists by Rafael Mentzingen and Michael Marchionna. Dan Rosenfeld made his Valpo debut in goal and picked up the win, making a pair of saves. Valpo had seven shots on goal, while Milwaukee notched just two.

Following Valpo: There will be no video stream available for this fixture, but there will be live online-only audio with Ben Ariano and Willie Boyd on the call. The links to the broadcast and live stats can be found on ValpoAthletics.com.

Scouting the Opponent: Western Illinois has a recent history of success as the program has won six conference tournament championships and made six NCAA Tournament appearances since 2004. The Leathernecks went 3-2 in the Summit League a year ago, finishing in second place. They have eight returning starters and 15 returning letter winners to go along with nine newcomers this season. Western Illinois was picked to finish third in the Summit League preseason poll. Drew Whalen was tabbed as a Summit League Player to Watch this year after earning all-league first team honors a year ago, but hasn’t appeared yet this season. Paul Kirdorf has scored two of the team’s four goals, while the Leathernecks have yet to notch an assist. In its most recent match, the team fell 1-0 to Northern Illinois on Wednesday. Director of Soccer Eric Johnson is the winningest men’s soccer coach in Summit League history. He has been in charge of the program for 20 years.

Series Notes – Western Illinois: Valpo holds an 11-18-2 all-time mark against the Leathernecks. It has won five straight meetings, most recently gaining a 5-2 victory in Macomb last season. This marks the ninth consecutive season these two teams have faced off. Last year’s win featured a hat trick by Adan Garcia. After a decade long gap between hat tricks from 2006-2016, that was the second straight season a Valpo player accomplished that feat. It also marked Valpo’s first hat trick in a road match since 1985. The five goals allowed last year against Valpo were the most permitted by Western Illinois since Sept. 22, 2013, which wildly enough was also a 5-2 loss to Valpo in Macomb. Since the start of the 2007 season, Western Illinois has allowed five goals in a match just three times, two of them coming against Valpo.

Brown with the Winner: Defender Alex Brown was part of a Valpo back line that limited Milwaukee to two shots on goal and helped shut out the Panthers last Friday night in a 1-0 road win for Valpo. In addition, he scored the game-winning goal in the 90th minute, using a header goal for the only tally of the match by either side. Brown played 86 of the 90 minutes in the triumph and scored the second goal of his career, both match winners.

A Victorious Debut: Redshirt junior goalkeeper Dan Rosenfeld made his collegiate debut on Friday after three injury-plagued seasons. Rosenfeld made two saves in his first Valpo game, helping shut out a quality Milwaukee side in a 1-0 Valpo victory. Rosenfeld received the victory and helped the team notch its second shutout of the season, already more than last year.

A Flair for the Dramatic: Both of Valpo's wins this season have come on late match-winners to snap scoreless ties. On Aug. 24 against IUPUI, it was a 104th minute golden goal by Michael Marchionna that sent Valpo to victory, while Alex Brown's goal against Milwaukee last Friday came in the 90th minute. Valpo beat a Panthers team that held a strong 29-14-10 home record in Kris Kelderman's six seasons as head coach prior to the defeat.

Making Moves: After having just one assist and no goals through his first two seasons, redshirt junior Michael Marchionna has emerged as a key cog for Valpo in the early portion of the season. He's been involved in all three of the team's goals, racking up one goal and two assists for a team-high four points. Marchionna has hit 13 shots this season, second on the team to Rafael Mentzingen, who leads the Missouri Valley Conference with 26.

All-Tournament Team: A pair of Valpo student-athletes were recognized as part of the All-Tournament Team for their play at Wisconsin over Labor Day weekend. Rafael Mentzingen and Nacho Miras both added all-tournament accolades to their resumes. Miras permitted just one goal in each game against quality Big Ten competition, recording six saves for the tournament. Mentzingen racked up nine shots over the two matches, two on frame.

Opening in Style: A 1-0 overtime victory over IUPUI allowed Valpo to start its season with a win for the first time since 2011. Valpo was also opening up at home for the first time since the 2011 campaign. Although it had gone winless in the last six season openers before that match, Valpo had three draws - including one at Big Ten foe Michigan State - and two overtime defeats in addition to a one-goal loss at No. 14 Kentucky in 2015. Valpo has seen three straight season openers go to overtime and six of their last seven lid-lifters have required play beyond the regulation 90 minutes.

Keeping It Clean: Redshirt junior goalkeeper Nacho Miras picked up the second shutout of his career on Aug. 24 against IUPUI. The first also came against the Jaguars in a 1-0 win in Indianapolis on Sept. 26, 2017. Keeping the opponent off the scoreboard in the season opener is nothing new for Valpo, which had shutouts in six consecutive season openers from 2009-2014.

A Glance at the Goalkeepers: Nacho Miras is a returning starter at goalkeeper, leading the way for a deep position that also includes Dan Rosenfeld and Alex Richt. Miras etched his name into the single-season program record book a year ago, posting a goals against average of 1.64 that ranked 10th in program history. He had seven saves in his first career start on Aug. 25 at Northwestern, the most saves by a Valpo keeper in a debut since 2001. His success continued with a career-high eight saves on Sept. 3 at DePaul, helping him earn MVP honors at the Chicago Classic, MVC Defensive Player of the Week recognition and a spot on the College Soccer News National Team of the Week.

Freshman Feat: Sophomore Jonas Engler made a good first impression as a rookie last year, becoming the first Valpo player with three goals as a freshman since 2014, when Stian Sandbekkhaug and Jordan James scored three apiece. Engler also had two assists to put his season point total at eight, the most by a Valpo freshman since Jordan Aidoud had 11 in 2012. Engler picked up All-MVC Honorable Mention a year ago.

Head Coach Mike Avery: In his 12th season at the helm of the Valpo men’s soccer program, Mike Avery owns a program-record 84 career victories. Under Avery's guidance, the team has been a stellar defensive side, as eight of the top nine defensive seasons in program history have come during his tenure. Avery has led the program to a new standard in his time as head coach, as a team that had enjoyed just one winning season in the 24 years prior to his arrival has finished above the .500 mark six times since his arrival. He has also seen numerous players go on to play professional soccer, including active pros Zev Taublieb, Kyle Zobeck, Stefan Antonijevic, Jordan Aidoud and Nico Campbell. Avery shattered the program record with his 77th career victory on Sept. 16 at Drake. He reached 77 victories in his 195th career match, while previous record holder Mis’ Mrak needed 288 matches to accumulate 76 wins.

A Look Back at 2017: The 2018 team is looking to build upon the school’s first season in the Missouri Valley Conference, which saw Valpo knock off a Top 25 opponent, place two individuals on the United Soccer Coaches all-region team, have three players receive all-conference recognition and help its head coach shatter the school record for career wins. Valpo finished the season with eight wins, tied for sixth in program history for wins in a single season. The team scored 30 goals, which also ranked tied for sixth in the program’s single-season record book. Valpo has scored 30+ goals in each of the last two seasons, just the second time in program history and the first since 1986 and 1987 that Valpo has racked up 30 goals or more in back-to-back seasons.

Flying Many Flags: Head coach Mike Avery and his staff have continued to pull from all over the world for players to comprise the men’s soccer squad. This year’s roster features players from 12 countries – Spain, Mexico, Jamaica, Colombia, France, Brazil, Japan, Canada, Germany, England, Italy and the United States.

Working with TOCO: Valpo will once again raise funds for They Often Cry Outreach (TOCO) this year. Throughout the 2018 season, the team is working to raise money and awareness for TOCO’s work through sport with at risk children in the Caribbean and United States. This year’s TOCO benefit game will be Oct. 6 against Loyola at Brown Field.