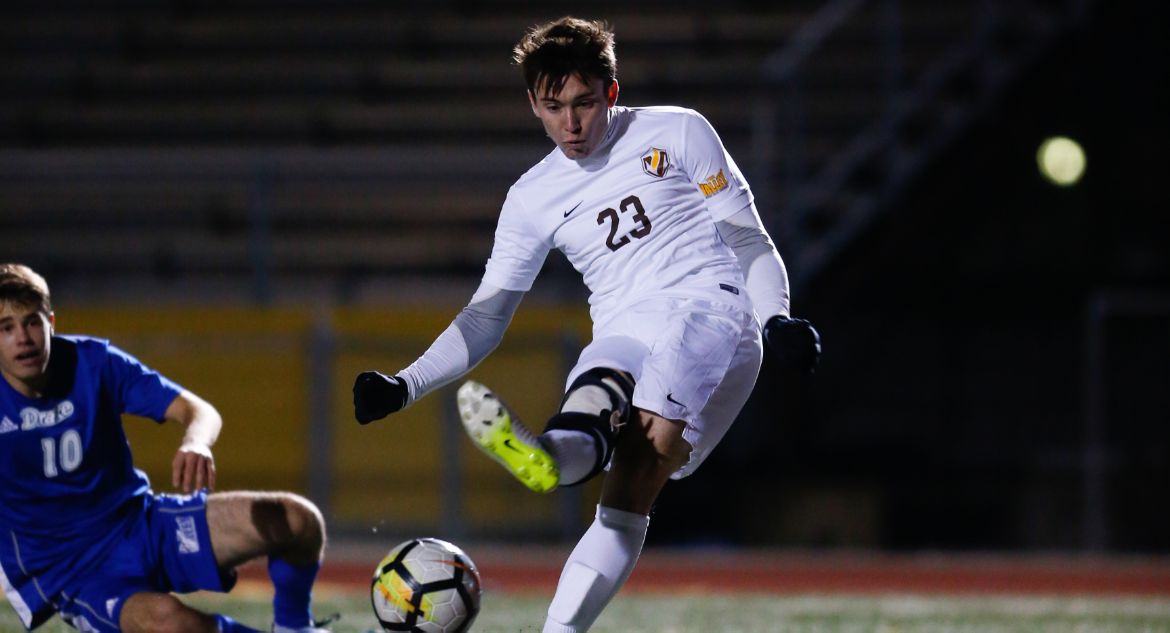 Mason Marcey had his first goal in a Valpo kit on Saturday. (Corey Lissy)
Drake at Valparaiso | November 03, 2018

The Valparaiso University men’s soccer team ended its Brown Field portion of the season on a high note, securing a 1-0 victory on Saturday night against Missouri Valley Conference foe Drake to nail down the No. 3 seed for next week’s conference tournament.

“It was a very good team win for us tonight as we were down a few of our regular players. The guys that came in did a great job, and it’s satisfying for me to watch them because I know how hard the whole squad has worked all season long. Drake really pushed us, especially in the last 10 minutes, and it turns out to be another valuable experience for us as we keep building the team into the postseason.”

“It’s been an interesting season. We have faced a lot of adversity with untimely injuries, and yet the guys have kept battling all year long. On Oct. 1, we fell to 2-7-1, and you look now—a month later—and we are 3-0-3 since that date. We head into the MVC Tournament in good form, we should have the majority of the guys who could not play tonight back and available for the tournament, and we are excited to see what we can take out of the next week in Evansville.”

Valpo will now turn around and play Drake once again on Wednesday at 3 p.m. CT in Evansville, with the winner of that match advancing to the semifinals against second seed Loyola on Friday afternoon. Wednesday’s match will be available for streaming on ESPN+.