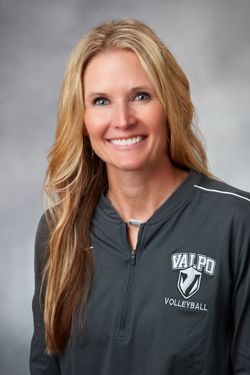 Carin Avery took over the Valpo volleyball program in July 2002, and immediately began a run of unprecedented success on the court. Valpo won at least 20 matches in each of Avery's first 14 seasons at the helm of the program - one of just nine programs nationwide to reach 20 or more wins in each of those seasons. Entering her 22nd season overall as a head coach and her 20th season at Valpo in the fall of 2021, Avery owns 478 career victories, three conference regular season and tournament championships, and three NCAA Tournament appearances.

A two-time league Coach of the Year, Avery has guided 55 All-League selections in her 19 years at Valpo, including seven AVCA Honorable Mention All-Americans, a Volleyball Magazine Honorable Mention All-American and an AVCA Regional Freshman of the Year. In addition, Avery’s squads have excelled in the classroom, earning the AVCA Team Academic Award 16 times and have been named to the AVCA Team Academic Honor Roll for maintaining a GPA among the top Division I programs in the country three times.

Avery led Valpo to an 11-9 record in the spring 2021 campaign and a top-half finish in the Missouri Valley Conference standings for the fourth time in as many years since joining the conference. She coached a pair of major award winners in Rylee Cookerly - the MVC Libero of the Year, Scholar-Athlete of the Year and an AVCA All-Region honoree - and Victoria Bulmahn - the MVC Freshman of the Year. Included among Valpo's 11 wins were the program's first victory over Illinois State since joining the MVC and the first wins in program history over traditional power UNI. Avery completed the spring 2021 season with a 423-207 (.671) record in her tenure as Valpo head coach, as well as a 478-231 (.674) record overall.

2019 saw Valpo claim 14 victories and advance to the MVC Tournament semifinals for the second straight season. Valpo had a pair of First Team All-MVC honorees, including the conference's Libero of the Year in junior Rylee Cookerly, who also earned AVCA Honorable Mention All-Region honors.

Avery led Valpo to a historic season in 2018, including the program's first postseason victories. Valpo earned an at-large berth into the 2018 National Invitational Volleyball Championship and won each of its first two matches to advance to the tournament quarterfinals. The postseason wins capped a 27-win campaign, tying for the second-most wins in program history. Valpo finished fourth in the always-competitive MVC and finished the year ranked 69th nationally in the RPI.

One year after leading the nation in digs/set, the 2018 Valpo squad not only led all of Division I in total digs, it also set a new D-I record in the 25-point rally scoring era for total digs under Avery's tutelage. Avery coached Valpo's first First Team All-MVC honoree in sophomore setter Brittany Anderson, as well as a second All-Conference selection in senior outside Katherine Carlson.

Avery led the Crusaders in their transition to the Missouri Valley Conference in 2017, as Valpo won 17 matches and finished in a tie for fifth place in the final MVC regular season standings - two spots above where Valpo was projected in the preseason poll. The 2017 squad led the nation in digs/set, becoming just the second team to average better than 20 digs/set for a single season since the move to 25-point rally scoring, led by freshman libero Rylee Cookerly, who was named the AVCA Midwest Region Freshman of the Year.

Avery guided Valpo through the most challenging season of her coaching career in 2016, dealing with an unprecedented rash of injuries - including injuries to both of the team's setters. Avery used an innovative approach when faced with this challenge, tasking libero Morganne Longoria with serving simultaneously as the team's setter - a feat unprecedented at the Division I level. Over the final 13 matches of the season, with Longoria playing setter and libero simultaneously, Avery led Valpo to a 7-6 mark and a spot in the Horizon League Championship.

The 2015 campaign brought yet another record-breaking start for the program, as Avery guided Valpo to nine consecutive wins to open the season - a new program record. Valpo went on to win 27 matches, tying the second-most wins in a single season in program history, and advanced to the Horizon League Championship title match for the fourth time since joining the league. The team brought home two in-season tournament titles in the early portion of the season, bringing to 22 the number of in-season tournament crowns Valpo has won during Avery's tenure. She coached two All-League and two All-Freshman Team choices

2014 saw Valpo explode out of the gate to start the season, as it opened the season with a 14-1 record en route to 25 victories. Valpo earned 13 straight wins to match the second-longest winning streak in program history, while along the way, Avery won her 300th match. She coached the Horizon League co-Player of the Year and an Honorable Mention All-Region honoree in Emily Campbell - the program's first Player of the Year since 2008 - and also mentored two other All-League and a pair of All-Freshman Team selections.

2013 was another successful season for Avery and the Valpo program. The program matched the best-ever start in team history, winning each of its first eight matches, including tournament wins at the UCF Invitational and the Popcorn Classic, capping the latter tournament with a win over Big Ten foe Iowa. Valpo ended the season with 25 wins, finishing in second place in the Horizon League standings and earning a berth in the league title match. Along the way, three players earned All-League honors and two others were named to the Horizon League All-Freshman Team.

In 2012, Avery led Valpo to 21 victories, including the program's first-ever win over a Big Ten squad, as it downed Indiana en route to claiming the Hoosier Classic crown. Valpo finished in second place in the Horizon League standings, going 10-4 in league play, while three players earned All-League honors, including Root, who earned a third straight Defensive Player of the Year award and was named an Honorable Mention All-American for the third time in closing her career fourth in NCAA history in digs.

The 2011 Valpo squad maintained the program’s successful run, winning 20 matches while placing three players on the HL All-League squad, including a repeat Defensive Player of the year in Root. That season came on the heels of a 2010 campaign which was one of the most successful Avery has had at Valpo, finishing 2010 with 27 victories, tied for the second-most wins in program history. Valpo advanced to the Horizon League championship match for the second time in a four-year span, and also boasted a school-record 11-match winning streak. Along the way, Avery coached the national statistical champion in digs/set, Taylor Root, who also was named the HL Defensive Player of the Year after setting new school and single-season records in the category. Valpo ranked fourth nationally as a team in digs/set and finished with the second-most digs in a single season in program history.

The 2009 squad continued the program’s run of excellence, as Avery guided Valpo to 22 victories and a runner-up finish in the league standings while coaching the league’s Newcomer of the Year. The 2008 season saw Avery lead Valpo to wins over Notre Dame, Louisville and Wake Forest, as well as Sweet 16 participant Western Michigan. Avery guided the 2008 squad as it led the nation in both kills/set and assists/set while also coaching the Horizon League Player of the Year and two Honorable Mention All-Americans.

Avery faced a unique challenge in 2007, as Valpo transitioned to the more-competitive Horizon League while also facing potentially devastating injuries. But under her tutelage, Valpo finished tied for third in its first season as a league member and advanced to the league championship match for the fifth consecutive season. The 2006 squad looked to be a rebuilding year for the program, but Avery still led Valpo to 23 wins and new single-season records for kills and hitting percentage.

2005 was the final season for the first group of athletes who played for four full seasons under Avery as head coach, and the four seniors went out with a bang, closing their four-year careers with a 103-31 mark as Avery led them to their third straight Mid-Continent Conference regular season and tournament championships, as well as their third consecutive NCAA Tournament appearance. Along the way, the team ran their Mid-Con winning streak to 21 matches, while Avery etched out a spot for herself in the Valpo record books, becoming the program’s winningest coach with her 93rd win at Valpo on October 21.

Avery guided the 2004 team to undoubtedly the most successful season in school history. The 2004 squad went 29-5, including a perfect 14-0 mark in Mid-Con action. Among the victories was an early-season win at rival Notre Dame, the first-such win in 24 years, and a school-record 14-match winning streak during the middle of the campaign. Avery earned her second straight Mid-Con Coach of the Year accolade as Valpo won the conference regular season and tournament titles en route to its second straight NCAA Tournament appearance.

Avery led the 2003 Valpo team to the first NCAA Tournament appearance in seven years, cementing itself as a program to be reckoned with at the mid-major level. The 2003 squad went 13-1 in conference play and 27-8 overall, including a thrilling five-set win at the ARC over Oral Roberts to claim the conference tournament title. For her efforts, Avery was recognized as the Mid-Con Coach of the Year. In 2002, Avery helped set the foundation for the success to come by guiding Valpo to 20 victories in her rookie season and a second-place finish in the Mid-Con standings.

Avery arrived at Valpo in 1999, joining then-head coach Becky Madden’s staff that faced the challenge of restoring a program that had followed up three straight 24-plus win seasons with back-to-back losing years in 1997 and 1998. In her three years as an assistant coach prior to ascending to head coach, Avery worked with Madden to rebuild the program and to recruit players to get the team back to the next level.

Before arriving at Valpo, Avery sharpened her coaching teeth in the NAIA ranks, serving as an assistant at Bethel (Ind.) College from 1995-96 before taking over as head coach in 1997. After going 43-10 and leading the Pilots to the NAIA Great Lakes Region Championship Game that season, Avery was named NCCAA Regional Coach of the Year. In 1998, Avery moved out west, leading Southern California College (now Vangard University) to four wins over NAIA Top-20 opponents with four freshmen starters, and finishing the year 12-14.

Avery began her collegiate playing career at the University of Kentucky, playing on an NCAA Tournament “Sweet Sixteen” team in 1992. Following that season, Avery transferred to Ball State University and led the Cardinals to three straight NCAA Tournament appearances. During her time at Ball State, Avery earned All-Mid East Regional, First Team All-Conference and was named Most Valuable Player of the MAC Tournament.

In 1995, Avery recorded 408 digs (3.61/ game) for the Cardinals, then the second highest total and average in school history. Today, Avery ranks among the career leaders in 11 different statistical categories. She was inducted into the Ball State Athletics Hall of Fame as part of the 1994 volleyball team in December 2017.

A 1996 graduate of Ball State with a degree in Special Education, Avery has played professionally on the Midwest Professional Volleyball Association Beach Tour since 1995, twice being named the tour’s Most Valuable Player (2000 and 2002).

Avery and her husband, Mike, reside in Valparaiso with their two sons, Alex and Kasongo (K.J.).