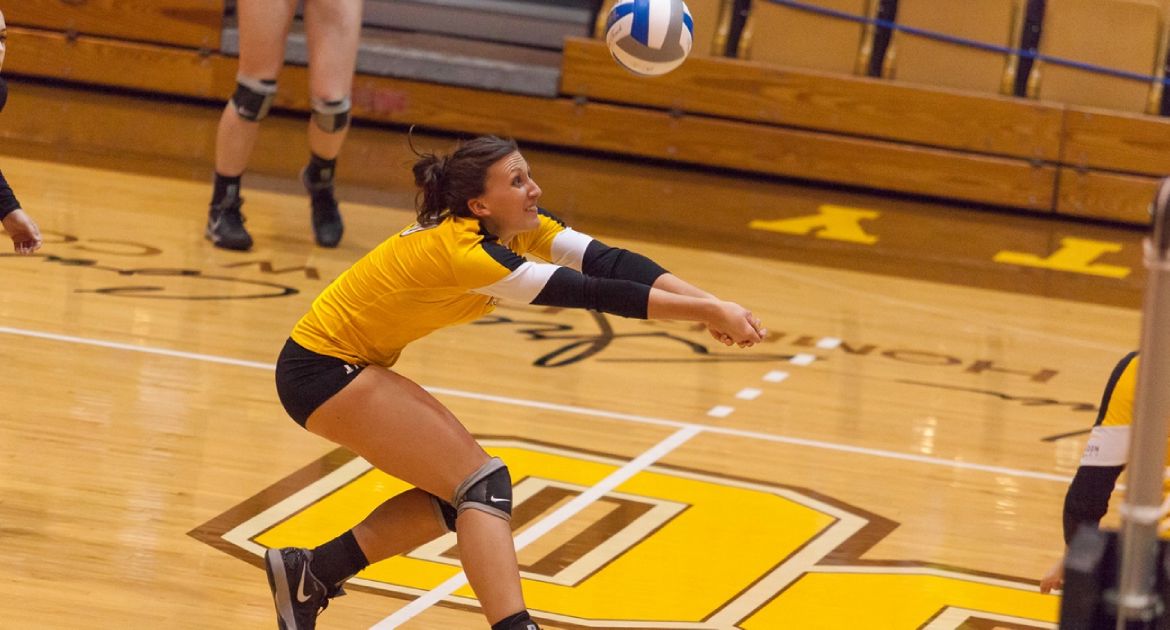 This Week in Crusader Volleyball: The Valparaiso volleyball team closes out the home campaign this weekend with a pair of crucial Horizon League contests. The Crusaders host Wright State on Friday night before taking on Oakland Saturday afternoon on Senior Day at the ARC, as they honor the three members of their senior class.

Previously: Valpo swept through a pair of road league matches last weekend, taking down Cleveland State in three sets on Friday night and Youngstown State 3-0 on Saturday afternoon. Allison Ketcham was named Horizon League Defensive Player of the Week for her effort in the back row in the two victories.

Following the Crusaders: Live video through the Horizon League Network, as well as live stats, will be available for both matches this weekend through ValpoAthletics.com, while WVUR will broadcast Saturday afternoon's match as well. HLN will carry free live video of each of the Crusaders' league matches and all home non-league matches, while select matches will be covered by Valpo's student radio station, WVUR [95.1, Valparaiso], as well. In addition, most matches will have live stats available online.

Head Coach Carin Avery: In her 13th season as head coach at Valparaiso, Carin Avery has won 307 matches and has led Valpo to three league regular season and tournament titles, as well as three NCAA Tournament appearances. A two-time league Coach of the Year, Avery has coached 40 All-League recipients over her tenure as Crusader head coach. She is Valpo’s all-time leader in both victories and winning percentage, and owns 362 career victories overall as a head coach.

Series Notes: Wright State - Valpo owns a narrow 17-14 edge in the all-time series over the Raiders, but since the Crusaders joined the Horizon League, it's been all Valpo, to the tune of a 14-1 advantage. The Crusaders haven't lost to WSU since 2007. Earlier this year, Valpo swept Wright State in Dayton behind 16 kills and 14 digs from Ketcham.

Oakland - The Crusaders have dominated the all-time series against the Golden Grizzlies, carrying an 18-5 advantage into Saturday's matchup. However, Oakland owns two of the three wins since joining the Horizon League, including a 3-1 decision in Rochester earlier this season. The Crusaders fell in that match despite hitting at a .240 clip over the four sets.

Scouting the Opposition: Wright State - The Raiders enter this weekend at 4-20 overall and 1-9 in Horizon League play. Five players have between 151 and 202 kills, led on the high end by Katie Klusman. Jessie Thornton leads the league with 5.14 digs/set.

Oakland - The Golden Grizzlies enter the weekend tied for the league lead at 8-2 in Horizon League play and are 16-9 overall, with a match Friday night at UIC. Cassie Pelloni and Melissa Deatsch average 2.97 and 2.95 kills/set, respectively, to lead the OU offense. Deatsch has also tallied 28 service aces, one of four Golden Grizzlies with at least 20 aces.

A Look at the Standings: Valpo has secured a spot in the 2014 Horizon League Championship and currently would own the third seed in the standings, by virtue of a sweep of Youngstown State. The Crusaders are two games back of both Oakland and Milwaukee, but could close down the gap on the Golden Grizzlies with a win Saturday.

Honoring the Seniors: Saturday will serve as the Crusaders' Senior Day, as they honor a trio of players in their final season at Valpo. Morgan Beil, Lindsey Hauch and Kelsey Victor are all closing out their Crusader careers. Hauch and Victor are both fifth-year seniors, joining the program prior to the 2010 campaign, while Beil came on board for the 2011 season. The trio has helped lead the Crusaders to at least 20 wins in each of their seasons.

13 Straight 20-Win Seasons: With the win at Cleveland State last Friday, the Crusaders continued their tremendous streak of success for another season. Valparaiso has won 20 or more matches every year since 2002, Avery’s first at the helm of the Crusader program - a streak which now sits at 13 consecutive seasons. Valpo is one of just 10 programs nationwide to have won at least 20 matches each year from 2002 through 2013, and is just the fifth team to reach the milestone again in 2014, joining Colorado State, Penn State, Stanford and Western Kentucky.

Campbell Continues to Crush: Sophomore Emily Campbell continues to rank among the league's leaders in kills after pacing the Crusaders in both matches last week. Campbell tallied 12 kills in the sweep of Cleveland State and posted a match-high 18 terminations in the win over Youngstown State. On the season, Campbell has registered 4.27 kills/set, good for second in the league and 26th in the nation. Campbell also owns the top-10 single-match kill totals for the Crusaders this year.

Ketcham Picks Up Another Honor: Freshman Allison Ketcham earned her second Defensive Player of the Week nod from the Horizon League office after pacing the Crusaders in digs last weekend. Ketcham opened with a 14-dig effort in the Crusaders’ win over Cleveland State, and followed with a team-best 21 digs in the victory at Youngstown State, matching the most digs by a Crusader in a three-set match this season. Ketcham is the highest ranking non-libero in the league both overall (3.46 digs/set) and in league-only play (4.30 digs/set) in digs. She is the first Crusader freshman to earn multiple Player of the Week awards from the Horizon League office since Taylor Root picked up a pair of honors as a rookie in 2009

Beil Heads Toward the Top-Ten: Senior Morgan Beil enters this week with 1,061 career kills, just 16 terminations shy of the Crusaders’ all-time top-ten in the category, while she is also in second place in program history in hitting percentage (.278). Beil, who has not had a hitting error in the last three matches, closed out last week with seven kills on just 18 swings at YSU. Once she reaches the top-ten in kills, Beil will be just the fourth player in program history to rank in the top-ten in both kills and hitting percentage. The senior is also just 27 blocks shy of the Crusaders' top-ten all-time in that category.

Victor Cracks the Block Chart: Senior Kelsey Victor combined for eight blocks in the Crusaders' matches against CSU and YSU last weekend to continue her march up Valpo's career blocks chart. Victor has totaled 340 career blocks, and enters this week just 11 blocks behind Jill Rychecky for eighth place all time.