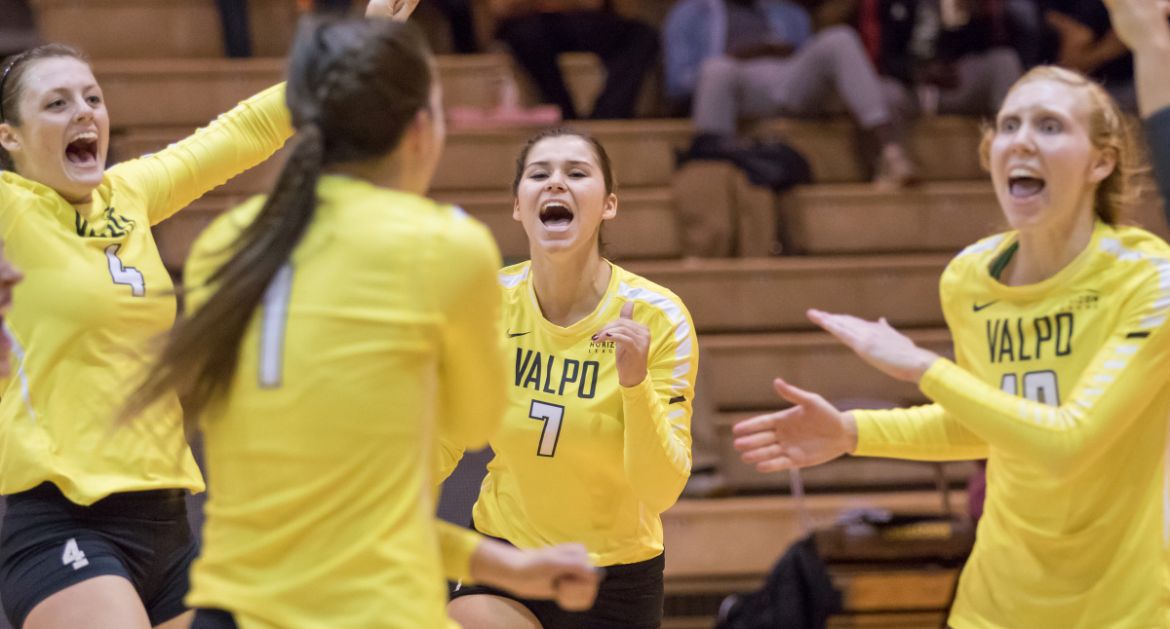 This Week in Crusader Volleyball: The Valparaiso University volleyball team hits the road for the first time since September 26, making the northeast Ohio swing of the Horizon League slate. The Crusaders face Cleveland State Friday evening in an attempt to move into a first-place tie in the league standings, and then continue on to take on Youngstown State Saturday afternoon.

Previously: Valpo split a pair of league matches at home last weekend, sweeping Milwaukee on Friday night before falling in straight sets to Green Bay on Saturday. The Crusaders wrapped up a five-match homestand with a sweep of Chicago State in non-league activity Tuesday.

Head Coach Carin Avery: In her 14th season as head coach at Valparaiso, Carin Avery has won 329 matches and has led Valpo to three league regular season and tournament titles, as well as three NCAA Tournament appearances. A two-time league Coach of the Year, Avery has coached 40 All-League recipients over her tenure as Crusader head coach. She is Valpo’s all-time leader in both victories and winning percentage, and owns 384 career victories overall as a head coach.

Series Notes: Cleveland State – Valpo owns a 19-13 edge in the all-time series over the Vikings, including a 3-1 home win and a 3-0 win in Cleveland last season. In fact, the Crusaders have won four straight matches over CSU, the first of which snapped a four-match winning streak in the series by the Vikings.

Youngstown State – The Crusaders are 25-7 all-time against the Penguins and have won 15 of 16 matchups since the start of the 2008 campaign. Last year saw Valpo claim a pair of wins over YSU, winning 3-1 at the ARC before sweeping the Penguins in Youngstown.

Scouting the Opposition: Cleveland State – The Vikings enter Friday night’s match at 16-4 overall and 5-1 in Horizon League play. CSU sits atop the Horizon League standings, but suffered its first loss last time out at Northern Kentucky. Christina Toth hits .292 with 4.04 kills/set, while Grace Kauth backs her up with 3.51 kills/set.

Youngstown State – The Penguins enter the weekend at 8-13 overall and with a 2-4 mark in league action, with a showdown versus UIC Friday night on the slate before meeting the Crusaders. A balanced YSU offense boasts five players with between 141 and 182 kills on the season, while on the defensive side of the ball, libero Nikki Thompson posts 4.74 digs/set.

Campbell Closing on 1K: Junior outside hitter Emily Campbell finds herself closing in on the 1,000-kill milestone not even three full seasons into her career. Campbell enjoyed one of the most efficient matches of her career on Tuesday, hitting .538 with 14 kills and no attack errors, to push her career total to 978. Campbell, who ranks third in the league with 4.15 kills/set, would become just the 14th player in Crusader history to reach 1,000 career kills with 22 more terminations, while she is also just 110 kills shy of Valpo’s all-time top-10 in the category.

Efficient Hitting: Approaching the two-thirds point of the season, the Crusaders’ offense has been as efficient as ever in 2015. Following a .301 hitting percentage in the win over CSU Tuesday, Valpo enters Friday night’s match hitting .253 on the year, which is on pace to set a new single-season team record in the category, besting last year’s record. Individually, only four times in program history has a qualifying player hit better than .300 in a season, but this year’s squad currently has two players - Taylor Graboski and Katherine Carlson - above that threshold.

Ketcham Takes On a New Challenge: Sophomore outside Allison Ketcham has been among Valpo’s top back-row players in her first two years as a Crusader, so it was only appropriate that, with regular libero Morganne Longoria sitting out Tuesday night’s win over Chicago State, it would be Ketcham tabbed to fill the position for the match. In her first contest at the collegiate level at libero, Ketcham stood out, recording a match-best 21 digs while also tallying three service aces. On the season, the sophomore is averaging 3.48 digs/set to lead all non-liberos in the Horizon League.

In Search of 20 More Wins: The Valpo volleyball program is already just three wins away from extending an impressive streak this season. The Crusaders find themselves among a prestigious group of programs nationwide, as last year’s 25-win campaign was the 13th straight season the Crusaders captured at least 20 victories. Only 10 Division I volleyball programs have won at least 20 matches in each of the last 13 years, a group which includes Colorado State, Florida, Hawai'i, Nebraska, Ohio, Penn State, Stanford, UNI and Western Kentucky.