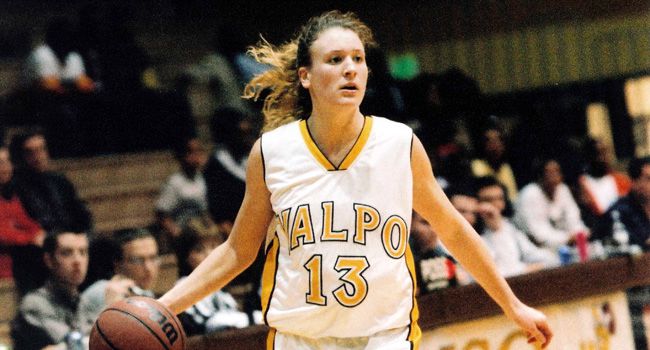 Katie Boone is being inducted into the Valpo Hall of Fame.

A catalyst at the point guard position for the Valparaiso women's basketball team, Katie Boone helped lead the Crusaders to a pair of NCAA Tournament appearances during her four-year career, and on Saturday, February 16, she will be inducted into the Valparaiso University Athletics Hall of Fame.

The Mid-Continent Conference Newcomer of the Year in 2001-2002, Boone was part of a run to the quarterfinals of the WNIT during her freshman campaign. Boone then earned Honorable Mention All-Conference honors in 2002-2003 and was a Second Team All-Mid-Con selection in 2003-2004, helping Valpo win conference titles and earn NCAA Tournament berths both years.

She twice was named to the Mid-Con All-Tournament Team, including being honored as Tournament MVP in 2003. Also a three-time Academic All-Conference honoree, Boone finished her Crusader career second in program history in assists, fourth in 3-point percentage and fifth in steals.

A 2005 graduate of Valparaiso University, Boone is currently employed as a physician assistant.