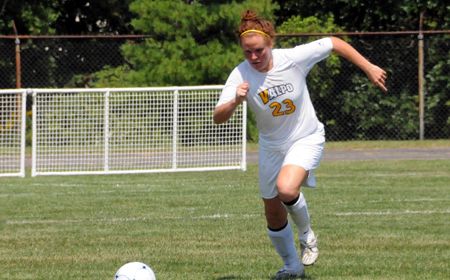 “I was glad to get a Sunday result after working so hard on Friday,” head coach John Marovich said.  “Our midfield did a good job of winning balls today.”

Lytle’s goal came from midfield as she sent the ball long into the IUPUI goal box.  The ball bounced high into the air, over the top of goalkeeper Kristin Haseley and into the back of the net for her second tally of the season just 19:36 into the match.

Valpo’s defense was strong throughout, allowing the Crusaders to earn their third shutout of the season.  Kristen Manski (Saint Charles, Ill./North H.S.) made five saves in the victory, but most of the shots came from long range.

“I thought the backline was very good today,” Marovich added.  “Kristen was solid and made the saves when she needed to.”

IUPUI (2-5) outshot Valpo 10-9 for the match and each team had two corner kick opportunities.  Giselle Guzman, who played the second half in goal for the Jaguars, made the only save for the visitors.

Valparaiso (4-1-2) will head out on the road for seven of its next eight matches, beginning on Friday evening when the Crusaders travel to Nashville, Tenn. to take on Vanderbilt.  Kickoff is set for 7 p.m.

Match Notes: Valpo is now 9-3-1 all-time against IUPUI and has won six straight against the Jaguars … Manski, a freshman, is now tied for fifth all-time with three career shutouts and is tied for eighth on the single season charts … more than 500 fans were in attendance as students showed up with vuvuzelas … Lytle’s goal was her first career match-winner … Casey Pedersen (Northville, Mich./Mercy H.S.) made her first start as a Crusader … Valpo is 8-0 against members of the Summit League since leaving the conference.