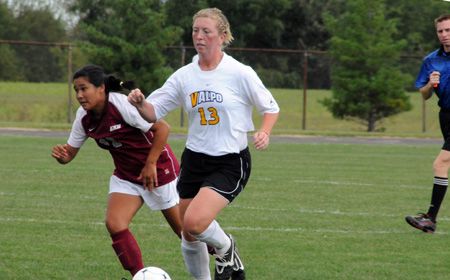 Casey Pedersen score the lone goal to give Valpo the win on Sunday. (Ray Acevedo)
Valparaiso at Butler | October 03, 2010

Casey Pedersen’s (Northville, Mich./Mercy H.S.) penalty kick goal late in the first half proved to be the difference on Sunday as Valparaiso defeated Butler 1-0 at the Butler Bowl in Indianapolis, Ind. for the Crusaders’ first Horizon League victory of the season.

“Getting a conference win on the road on a Sunday is big for us,” head coach John Marovich said.  “We did a good job today for the most part.  At times the ball got away with us because it was windy, but overall to get a win on the road is huge.”

Pedersen converted her second penalty kick of the season for the lone goal of the match at the 37:13 mark.  The penalty kick was set up after Tara Ellis (Portage, Ind./Portage H.S.) was fouled in the box after turning and trying to get a shot off.

Kristen Manski (Saint Charles, Ill./North H.S.) made five saves for her fourth shutout of the season, including a pair of big stops in the second half to get the Bulldogs off of the scoreboard.

Butler outshot Valpo 9-7 for the match, including 8-3 in the second half after Valpo held a 4-1 edge after the opening 45 minutes.

“The win today is great but we have to have to make it short-lived,” Marovich added.  “Now we have to get ready for next weekend as we go on the road to Milwaukee and Green Bay.”

Valparaiso will be in Milwaukee, Wis. on Friday evening to battle the Panthers of the University of Wisconsin-Milwaukee in a rematch of last year’s Horizon League championship match.  Kickoff is set for 7 p.m.

Match Notes: Pedersen is now tied for the team-lead with three goals and eight total points … she was the only Crusader with two shot attempts on Sunday … Manski now has four clean sheets on the year, tied with Rose Holtkamp (2001) for seventh on the single season charts … the freshman is now in fifth place alone with her four career shutouts … the win was Valpo’s first ever against the Bulldogs in Indianapolis … Valpo has won two straight meetings between the schools but Butler leads the all-time series 6-2.