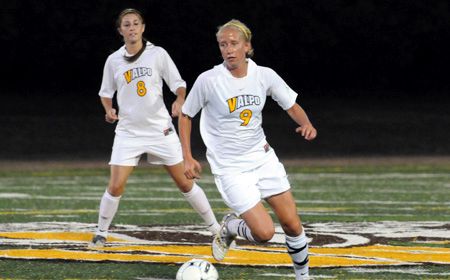 Valparaiso and the University of Wisconsin-Green Bay battled each other for 110 minutes on Sunday afternoon at Santaga Stadium in Green Bay, Wis., but neither team could find the back of the net and thus the two sides came away with a scoreless draw in Horizon League action.

“It’s unfortunate because we have been working hard and are just not coming away with goals right now,” head coach John Marovich said.  “We need to keep doing what we’re doing to create these opportunities.”

Valpo outshot the Phoenix 19-11 on the afternoon, including 6-1 in the two overtime periods, but could not find the elusive goal.  The Crusaders forced Green Bay (2-7-3, 0-3-1 Horizon) goalkeeper Maddie Drusch to make six saves, and created six corner kick opportunities, but managed just the draw.

Lauren Gagnon (Grand Haven, Mich./Spring Lake H.S.) had a couple of quality opportunities inside of the 18-yard box, including one early in the second half that Drusch made a stop on.

Luisa Desario (Bartlett, Ill./Bartlett H.S.) had a team-high four shots, including two on goal, while Catherine Terrell (Brighton, Mich./Brighton H.S.) also had a pair of shots on frame.

Valparaiso (5-6-4, 1-3-1 Horizon) will return home next Sunday afternoon to begin a three-match homestand to wrap up the regular season.  Kickoff is set for 1 p.m. at Brown Field against the Raiders of Wright State.

Match Notes: Green Bay leads the all-time series 8-3-2 … Manski’s shutout moved into a tie with Rose Holtkamp (1998-2002) for fourth place on Valpo’s career list … Valpo’s four draws this year set a single season record for ties … this was the second scoreless draw of the season for the Crusaders (Eastern Kentucky, Sept. 5) … Valpo finishes the road slate 3-4-3 on the season and 1-2-1 in conference play.