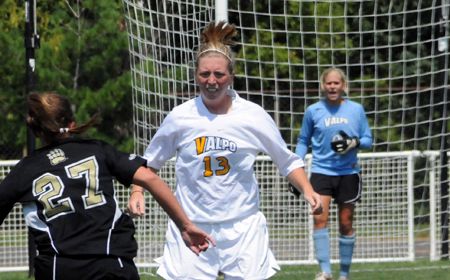 Valparaiso scored three times in less than 18 minutes spanning both halves on Friday evening as the Crusaders defeated IPFW 4-2 at Hefner Stadium in Fort Wayne, Ind. to improve to 3-0-1 on the season, the best four match start in program history.

“I was really pleased with the performance of our team tonight, especially in the second half,” head coach John Marovich said. “We were able to tweak some things with the system during the match and the kids responded to them.”

The Crusaders found the scoreboard first with just over 10 minutes remaining before halftime.  Rachel Hoaglin (Lakeville, Minn./Academy of Holy Angels H.S.) picked up a Mastodon clearing attempt, dribbled down field, and fired a blast from 25 yards out, beating goalkeeper Erin Nayler.

Valpo took the 1-0 lead into intermission, despite being outshot 5-3 by IPFW.

“We scored some really nice goals tonight, including Brooke’s off of a set piece” Marovich added.

Four minutes later, Luisa Desario (Bartlett, Ill./Barlett H.S.) gave Valpo a three goal advantage with her second tally of the season.  Catherine Terrell (Brighton, Mich./Brighton H.S.) started the play, finding Lauren Gagnon (Grand Haven, Mich./Spring Lake H.S.) in the middle of the box.  Gagnon slotted the ball to Desario, who beat Nayler one on one for the goal.

“In the second half we did an extremely good job of moving the ball and changing the point of attack,” Marovich said.

IPFW (1-3) got on the scoreboard with 32:24 to play in the match as Lisa Underwood scored her first goal of the season with Tara O’Toole drawing the assist.

Valpo immediately answered as Casey Pedersen (Northville, Mich./Mercy H.S.) scored her first goal as a Crusader.  With Henderson drawing the assist, Pedersen beat Nayler from 25 yards out to the far post, giving the Brown and Gold a 4-1 advantage.

The Mastodons would add one late goal with just under 20 minutes remaining as Arianne Mason scored on a ball that slipped through Valpo keeper Kristen Manski’s (Saint Charles, Ill./North H.S.) hands, but that would be the last time IPFW would find the back of the net on the night.

“We played pretty solid defensively all night, but we made two mistakes and that’s what we have to clean up,” Marovich concluded.

Valpo finished the match with just eight total shot attempts, but six of them were on goal with four finding the back of the net.  IPFW had 15 total attempts, with Manski making five stops between the posts.

The Crusaders return home on Sunday afternoon to host Eastern Kentucky at Eastgate Field, looking to remain unbeaten on the 2010 season.  Kickoff is set for 1 p.m.

Match Notes: Valpo is now 7-2-1 all-time against IPFW and has won four straight meetings between the two schools … this was the first time all season Valpo was outshot in a match … Desario is the only multi-goal scorer for the Crusaders this season, with seven other players having one goal each … Desario also has a team-leading six points … Gagnon tied Desario for a team-leading two assists … Hoaglin and Desario each have eight career goals … Valpo’s four goals in a match were the most since posting a 4-0 victory against IPFW at Eastgate Field on Sept. 7, 2007.