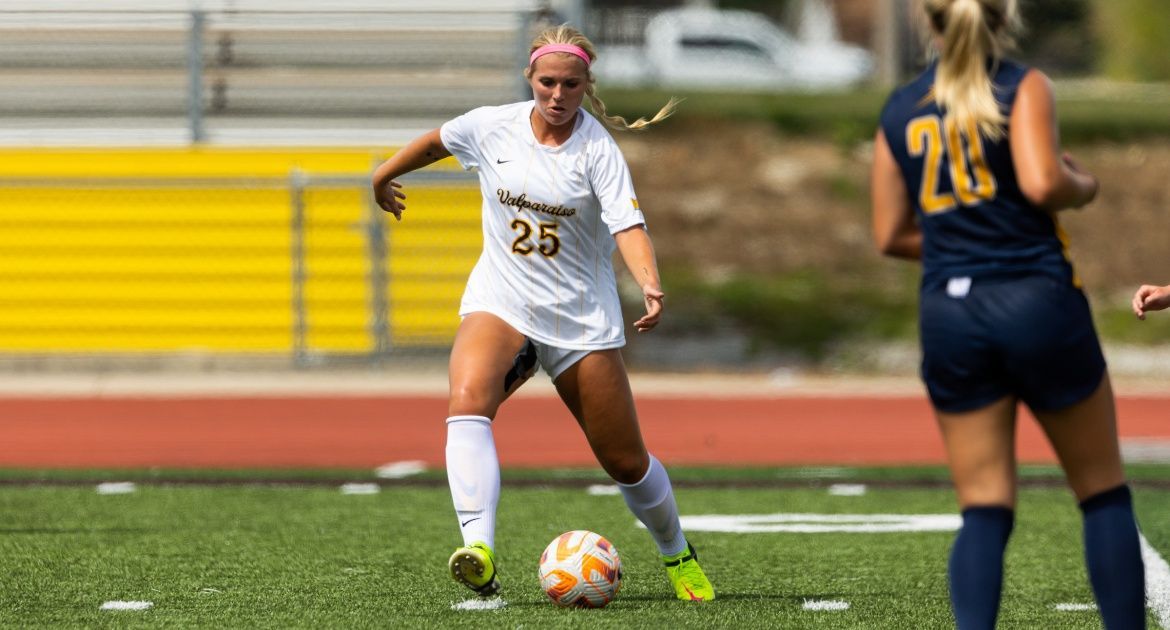 Next Up in Valpo Soccer: Fresh off earning all three points in its conference opener, the Valpo soccer team returns home to Brown Field for a pair of MVC fixtures over a span of four days. The Beacons will welcome MVC newcomer UIC to town Thursday night before turning around to host Drake on Sunday afternoon.

Previously: The Beacons earned a victory in their MVC opener last Saturday at UNI, courtesy of a goal in the 87th minute from Molly O’Rear to take down the Panthers, 1-0. Nikki Coryell made four saves in goal in the shutout win.

Looking Ahead: The third match day of the conference schedule is Valpo’s bye, so the Beacons won’t return to action until next Sunday, Oct. 2 with the trek to Missouri State.

Head Coach John Marovich: In his 15th season at the helm of the Valpo program, John Marovich holds a 115-110-40 (.509) record both overall and at Valpo as a head coach. The 2014 Horizon League Coach of the Year, Marovich holds Valpo’s all-time records for both victories and winning percentage.

Series Notes: UIC - While this will be the first meeting between the two sides as MVC foes, Valpo and UIC do have a history, as Valpo owns a 3-1-1 advantage in the all-time series against the Flames. The Brown and Gold took wins in all three matchups when both sides were in the Horizon League, but UIC earned a 3-0 victory in the most recent meeting - a nonconference matchup in Chicago on Sept. 23, 2019.

Drake - Valpo is just 1-6-2 all-time against the Bulldogs, but that one victory came in last season’s meeting - a 1-0 victory in Des Moines on Oct. 13, 2021. Kelsie James scored directly from a corner kick for the match’s lone goal, while Nikki Coryell earned the clean sheet with five saves.

Scouting the Opposition: UIC - The Flames enter Valpo at 1-4-2 on the season, but picked up that win last time out in their MVC opener with a 2-0 home win over Illinois State. Four different UIC players have found the back of the net, while in goal, Lauren Keiser has seen the majority of playing time and owns a 0.80 GAA and an .840 save percentage.

Drake - The Bulldogs come into the week at 1-5-2 on the season and 0-0-1 in MVC play, earning a point with a 2-2 draw against Southern Illinois in their conference opener. Drake will take on Missouri State Thursday evening before coming to Valpo. Emma Nagel has a team-high three goals this season, while Makenna Shepard has found the back of the net twice as well.

Starting With Three Points: Valpo opened conference play on the road victorious last Saturday, prevailing 1-0 at UNI. It is the second straight season and the third time in six seasons as an MVC member that the Beacons have earned three points from their first conference game.

Pushing For Six (or Nine): The Beacons now find themselves in good position to make it multiple wins in a row to start the MVC slate, with the next two matches at home on Brown Field. If they were to do so, it would be a good omen for the team’s position in the standings at the end of the season. Valpo has opened conference play with consecutive wins eight times in program history, and in seven of those instances, the program has finished in the top-three of the league standings - including all four of its conference regular season titles. Even better, Valpo has won three matches in a row to open conference play six times in program history, and all six of those sides finished in the top-two.

A Memorable First Goal: Freshman Molly O’Rear picked quite the time to find the back of the net for the first time in her collegiate career, striking in the 87th minute to give Valpo the 1-0 win at UNI. It was a well-deserved goal for the rookie, who has been dangerous on the attack all season long and enters the week with an MVC-high 25 shots on the year.

Here For the Drama: O’Rear’s match-winner was the latest match-winner in regulation by a Valpo player since Kelsey Jahn struck at 89:33 in the 2017 MVC opener at Missouri State.

Helping Out: Junior Kelsie James and senior Allie Anderson earned assists on O’Rear’s goal - James with a throw-in and Anderson with a flick on with her head to O’Rear. Anderson’s assist was her second of the season and the fifth of her collegiate career, while James owns eight career assists — two of which have come this year. Notably, six of James’ eight career assists have come on match-winning goals.

Posting the Clean Sheet: Junior Nikki Coryell preserved the shutout on Saturday at UNI by making four saves in goal. The clean sheet was her third of the season and the 15th of her career, as she now sits alone in fourth place in program history in the category and is one of just 18 goalkeepers in MVC history with 15 or more shutouts.

Winning Weekly Awards: O’Rear was named MVC Freshman of the Week on Tuesday for her match-winning goal at UNI, becoming Valpo’s second weekly honoree this season. Coryell was honored following the opening weekend of action as the MVC Defensive Player of the Week. With five Defensive weekly awards in her career, Coryell is tied with Kelsie James (two Offensive, three Freshman) for the second-most prolific weekly award winner in program history, trailing only Lori Moore (1999-2002), who was a six-time Mid-Continent Conference Player of the Week.

Looking For Conference Success: With MVC play under way, Valpo is looking to build on its success within conference play over the last two seasons. Since the start of the spring 2021 campaign, the Beacons are 10-3-4 within regular season MVC matches - a mark which improves to 10-1-4 with the removal of the two Loyola matches.

The First Time: Five newcomers have seen their first action in the Valpo uniform this season, most recently Kennedy Hill on Sept. 4 at Ball State. In addition, five different players have earned their first career start at Valpo this year, most recently fifth-year transfer Andrea Garcia on Senior Day versus Bowling Green.

Always in the XI: Three players started all 18 matches for Valpo a season ago: Kiley Dugan, Nicole Norfolk and Abby White. White did not play against Chicago State, snapping a string of 22 consecutive starts to begin her collegiate career. In their fourth season in the Valpo uniform, Dugan and Norfolk have both started all 59p matches since stepping on campus.