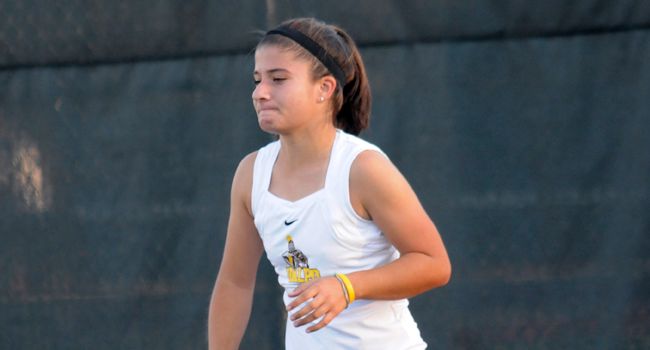 The Crusaders met Utah State for an early morning match on Sunday. Playing at a neutral site, the Aggies were able to defeat the Crusaders 7-0. Despite the team loss, the No.2 doubles pairing of Megan Barthels (Grand Rapids, Mich./Catholic Central) and Paige Heuer (Munster, Ind./Munster) continued their solid play, winning their second consecutive match.

Almost identical to their last outing, the Crusaders put forth a solid opening start in doubles play. Utah State opened play with an 8-1 win over the Crusaders’ No.1 doubles pairing of Kristin Zakiewicz (Bristol, Ind./Northridge) and Kaitlyn Hamel (Lakewood, Colo./Green Mountain. Barthels and Heuer were able to bring the Crusaders back in No.2 doubles, defeating their Aggie opponents 8-6 in exciting fashion. With the doubles point even entering the last match, the Aggies were able to escape with the point by defeating Angelina Goheen and Michele Fredlake 8-2 in No.3 doubles.

With the doubles point secured, the Aggies would go onto sweep singles play. In No.1 singles, Hamel was defeated by Utah State’s McKenzie Davis 6-1, 6-1. Zakiewicz and Morgan Paras would each drop their matches 6-3, 6-0 in No.2 and No.6 singles. Despite falling in No.3 singles, Heuer was able to build off her solid play in doubles, taking four games in each set. Barthels and Fredlake were able to take games in each of their matches as well, but were unable to secure a point for the Crusaders.

The Crusader women return to the court next Sunday to play the first match of their four-game home-stand. Up first for the Crusaders is Dayton. The match is scheduled for a 10:00 a.m. start.