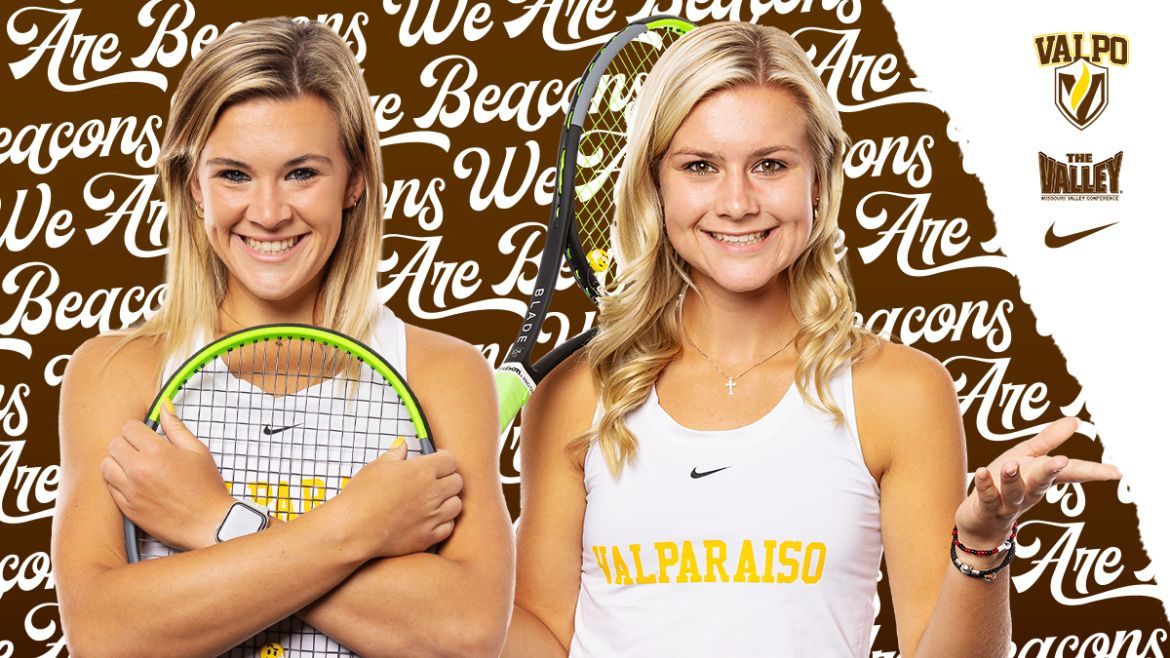 The sisters knocked off Illinois State’s top-seeded doubles tandem of Zlatanovic/Potsi 8-4 to capture the conference crown in Flight 1 Doubles at the Missouri Valley Conference Individual Championships, hosted this weekend at the Valpo Tennis Complex.

An unforgettable day for the Czerwonka family continued as Olivia rolled to a straight-set 6-4, 6-2 victory over Illinois State’s Alexandra Abyasova in the Flight 2 Singles championship to secure her second conference title of the day.

“I’m really speechless,” Olivia said. “I’m proud to be standing with Claire to win the doubles championship together. It’s incredible for our team and we’re proud to represent Valpo. We’re so blessed to be doubles partners with each other; each of us knows how the other one plays.”

Leading 4-3 with the match on serve, Valpo broke the Illinois State tandem to take a 5-3 edge and go up a break in the eventual 8-4 victory.

“The break was big,” Claire said. “In doubles, that’s tough to do, so that was a big break and it gave us the momentum. We worked really hard for this moment during the COVID year, and our teammates were a big part of it. Our team chemistry is great and everyone had an amazing showing this weekend. The support of our teammates and coaches has been special.”

“The first set was extremely important,” Olivia said. “I had faced (Abyasova) earlier this season, and we split the first two sets. I knew it was going to be a tough one. After the first set, I was confident in my mindset.”

“It was awesome to be at home,” Olivia said. “We had the support of our family and friends and the other athletes. It was fun to hear people cheering us on. Being able to sleep in our own beds instead of staying in a hotel helped a lot as well.”

“Winning this is incredible and shows a lot about our program,” Olivia said. “I give all of the credit to (head coach) Bob (Modesto) and (assistant coach) Patrick (McAuley). They’re out here every day at 6 a.m. to help us get better. It’s incredible what they do for our team. The team has improved so much under Bob’s coaching the last few years.”

“This is the first time we’ve won an MVC Championship in doubles, so that shows you how far we’ve come in our doubles play. It’s phenomenal to see Olivia win the singles championship; she puts in the work and does things the right way. She’s so coachable and teachable. For her to accomplish what she’s accomplished bodes well for the future of Valpo tennis. Olivia is going to sleep well after winning two conference championships in one day.”

“Claire not only surpassed the program doubles record on Friday, but she kept winning in doubles on Saturday and Sunday. Claire and Olivia had lost to part of that Illinois State doubles team in the past, so that makes this a great accomplishment.”

“Amanda did tremendously well this weekend. She finished fifth in singles and did a great job in doubles. She combined for a 4-2 record in singles and doubles this weekend. Demi came back and won a match tiebreak today to finish off a great weekend. A lot of players are devastated after losing the second set, but Demi came back and won that match tiebreak with a tremendous performance. Mia is an all-star for us. She didn’t have the results she would like, but she is a no-quit type of player who never gives up. We’re looking for great things from her in the future. Bella did terrific in doubles; she came through in the clutch. It was Allison (McConnell’s) birthday yesterday – unfortunately she had an injury – but she enjoyed a great birthday weekend none-the-less.”

“Two years ago, when we played at Northern Iowa for the MVC Individual Championships, we were done after two days and were already home on Sunday. For us to not only be in the finals, but to win two of them, is a great accomplishment for the team. This shows how far we’ve come. We feel really good about the way we played this weekend.”

The Beacons will close out the fall season this Saturday, Oct. 16 at 10 a.m. with a dual match against Grand Valley State that will take place at the Valpo Tennis Complex.