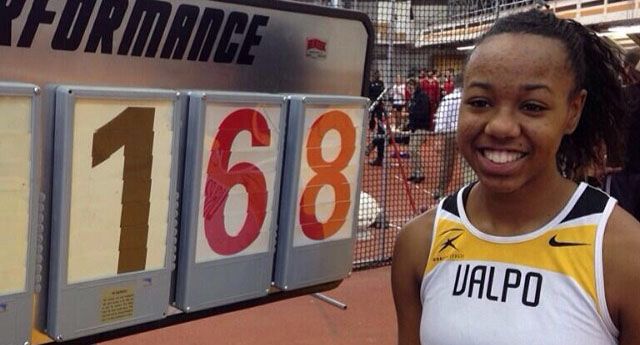 The Crusader women recorded one first-place finish and seven top-ten finishes at the 2014 Fred Wilt Invitational at Purdue University on Saturday.

Leading the way for the Crusaders was Jazmin Taylor (Rock Island, Ill./Rock Island), who put forth her best performance of the season in the high jump. Taylor took first overall in the event, breaking the program record in the process. Earlier this season, Taylor set the program’s top mark in the high jump at 5’4 ¼”. The junior added nearly two inches to that mark on Saturday, setting Valparaiso’s new best mark at 5’6”.

Elsewhere in the field events, Sarah Drozdowski (Roselle, Ill./Lake Park) threw for 58’ 5 ¼” and took a third-place finish in the weight throw. Drowzowski occupies four of the top five marks in the weight throw in program history. Sophomore Megan Howdeshell (Bourbon, Ind./Triton Junior-Senior) took sixth in the same event, throwing for 50’7 ½”. Drozdowski also placed ninth in the shot put, throwing for 40’4 ¼”.

Elizabeth Bloy (Freedom, Wis./Freedom) took sixth in the 800-meter run, clocking in at a season-best time of 2:15.63 – good for third in the Valparaiso indoor record book.

In the 600-meter run, Nicole Zehel (Wixom, Mich./Lutheran Westland) also ran into the Crusaders’ indoor record book. Zehel finished with a time of 1:41.51; a time good for ninth place in the event and third in the program’s record book.

The Crusaders are back on the track next weekend to compete at both the GVSU and Alex Wilson Invitationals on Friday, Feb. 21 and Saturday, Feb. 22.