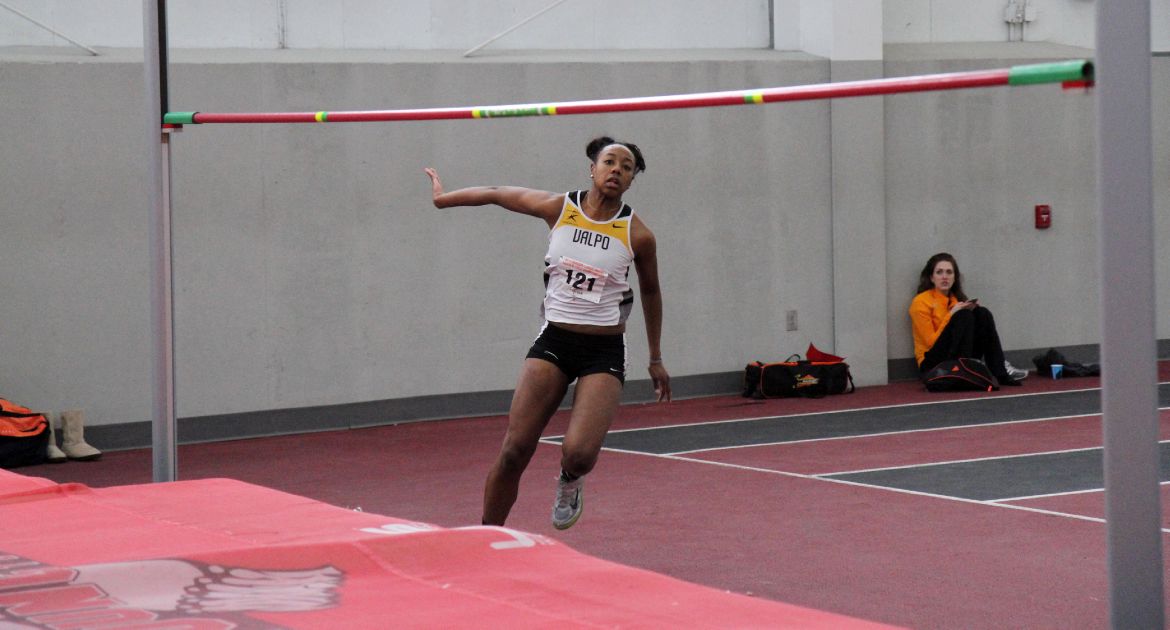 On Saturday, the Crusader women traveled to Chicago, Ill. to compete in the DePaul Relays. The relays featured athletics from DePaul, Northern Illinois, UIC, and Northwestern. Behind a handful of top-five finishes, Valparaiso took third overall with 82 points. Brook Hinstorff (Waterloo, Wis./Lakeside Lutheran) and Jazmin Taylor (Rock Island, Ill./Rock Island) led the Crusaders on the day with first and second place finishes in their respective events.

Taylor cleared 5’7” in the high jump and broke her own program record of 5’5” which was set just a weekend ago. Taylor’s record-breaking performance was good for second-place overall.

Hinstorff took first in the javelin throw, leading the field with a mark of 112’1”. Heather Mende (St. Charles, Ill.) took second in the same event, throwing for 104’0”.

Elizabeth Bloy (Freedom, Wis./Freedom) finished third in the 800-meter run, clocking in at 2:15.39. Bloy’s time was the fourth-best time in program history.

The Crusaders put a string of fourth-place finishes together, starting with Malea Buck (Davenport, Iowa/Central) in the 400-meter hurdles. Buck set a personal season-best, finishing in 1:09.23

In the triple jump, Ann Chapman (Washington, Ill./Washington Community) took fourth overall with a jump of 32’11”.

Megan Howdeshell (Bourbon, Ill./Triton Junior-Senior) took fourth in the discus with a mark of 138’0”. Howdeshell also finished seventh in the hammer throw (139’9”).

On Thursday, Valparaiso’s vaulters competed in the Cougar Invitational at Concordia University. Sarah Peters (LaGrange, Ill./Lyons Township) took a first-place finish in the pole vault for Valparaiso, clearing 11’3 ¾” in the event – the third best height in program history.

The Crusaders return to the track next weekend for the Miami (Ohio) Invitational in Oxford, Ohio. The two day event starts on Friday, April 25th and concludes on Saturday, April 26th. The invitational will serve as the final tune-up before the Horizon League Outdoor Championships.