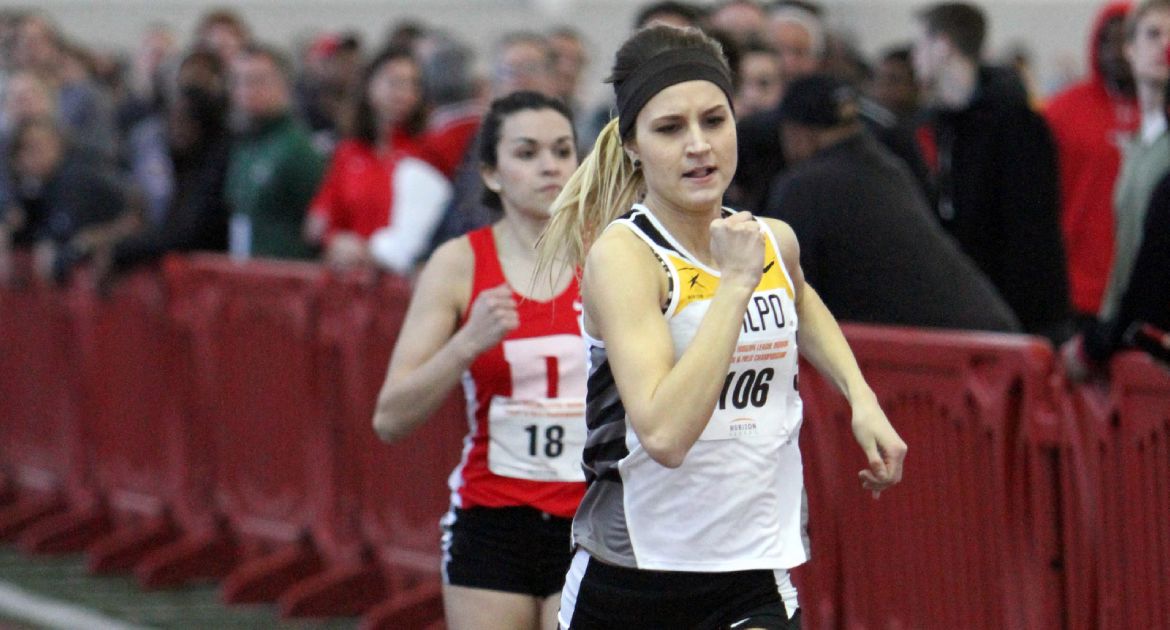 The Valparaiso women’s track and field team hosted the inaugural Crusader Open on a cold, windy, rainy Saturday at the new Warren G. Hoger Track at Brown Field. The Crusaders had their first home meet in over 50 years in their final tune-up before the Horizon League Outdoor Championship. The Brown and Gold had six individual title winners.

Hannah Reynard (Jackson, Mich./Napoleon) improved her fourth fastest time in the 400 meter hurdles by over a second to move up to third place in the Crusader record books. She took first by crossing the finish in 1:03.71, almost two seconds ahead of the pack.

Liz Bloy (Freedom, Wis./Freedom) captured the title in the 800m in a season best 2:16.44, beating the field by almost five seconds.

The trio of Brooke Hinstorff (Waterloo, Wis./Lakeside Lutheran), Sarah Drozdowski (Roselle, Ill./Lake Park) and Heather Mende (St. Charles, Ill./St. Charles East) swept the top-three in the javelin, which took place at Eastgate Field. Hinstorff went wire-to-wire in the lead as her first attempt of 33.70m/110-7 was good enough to capture the title. Drozdowski finsihed second with her throw of 31.50m/103-4 and Mende claimed the bronze on her final attempt by hitting 31.16m/102-3.

The senior/junior duo of Jazmin Taylor (Rock Island, Ill./Rock Island) and Sarah Peters (LaGrange, Ill./Lyons Township) each won the titles in their respective events. Taylor won the high jump by clearing 1.60m/5-3 while Peters vaulted a season best 3.50m/11-5.75. The pole vault was competed inside the ARC due to the inclement weather.

The Crusaders will travel to Rochester, Mich. next Friday for the Horizon League Outdoor Championship, hosted by Oakland. Live results will be available for all three days at ValpoAthletics.com.