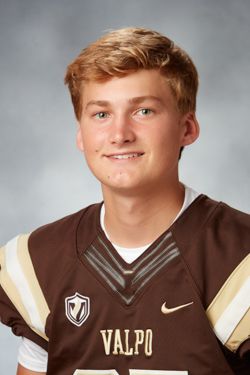 Spring 2021: Played in all six games as the team’s starting kicker… Earned All-PFL First Team recognition and was named the squad’s Most Improved Player… Went 7-of-8 on field-goal tries and 13-of-13 on PATs, totaling 34 points… Had 25 kickoffs for 1,289 yards, an average of 51.6 yards per kickoff… Booted two touchbacks… Ranked fifth in the league in scoring at 5.7 points per game, second in field goals per game at 1.17, first in made PATs without a miss at 13-for-13 and first in field-goal percentage at 87.5… Boasted Valpo’s best single-season field-goal percentage in over 15 years… His season-long 49-yard field goal came at a critical time as it represented the first points of Valpo’s eventual 10-7 win at Drake. That kick was the longest made field goal by any PFL player all season… Had multiple made field goals on two occasions – March 20 vs. Drake and April 17 vs. San Diego… Had a season-high four extra points on March 27 vs. Butler… Named the team’s Special Teams Player of the Week for Week 1 at Butler.