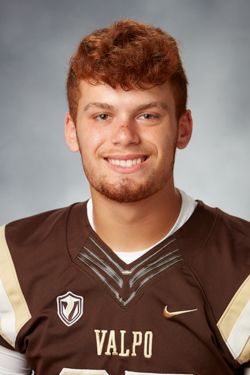 2019: Did not see game action during his first season on campus… Retained four seasons of eligibility.

Prep: Finished his prep career as Clearview High School’s all-time leading rusher… Was the Patriot Athletic Conference Stripes Division Offensive MVP in 2017… Was named his team’s Most Valuable Offensive Back in 2016, 2017 and 2018 after earning his team’s Rookie of the Year award in 2015… Helped his team reach the state playoffs in 2017 and 2018 while winning conference championships in each of those seasons… Earned All-Ohio honors in 2017 and 2018… Was a four-time PAC Scholar-Athlete, all-conference honoree and all-county honoree (2015-2018)… Received his team’s Captain Award in 2017 and 2018… Was a four-year letterwinner… Also competed in varsity track and field in 2015, 2016 and 2018… Was a five-year leadership intern with Camp Invention while also volunteering with the Leukemia Lymphoma Society, Mary Lee Tucker Cloth a Child, Clearview Youth Football, the Buddy Reading Program, 2nd-and-7 volunteer reader and the Special Olympics… Was a member of National Honor Society, was a Student Council Class Officer and was named his conference’s “2nd-and-7” student-athlete of the week.

Personal: Son of Roger and Miriam Engle… Has two brothers, Roger and Brady… Brother Roger played quarterback at Concordia University of Ann Arbor in Michigan and holds the school record for passing yards in a single season… Enjoys playing Fortnite… Is very passionate about community service, especially the Leukemia and Lymphoma Society… His uncle battled leukemia and passed away in May 2018 at the age of 34 after a four and a half year battle. His father was a match and donated his bone marrow and two rounds of stem cells, extending Bubba’s life by four and a half years… Broke his high school’s career rushing record that was previously held by Anthony Hitchens, who played for the Dallas Cowboys and currently plays for the Kansas City Chiefs. Hitchens tweeted to congratulate him… Joined his older brother in the Clearview record book as Roger holds all of the passing records. Hopes his younger brother Brady will keep the tradition going when he reaches high school in a few years… Father is the defensive coordinator at Clearview.