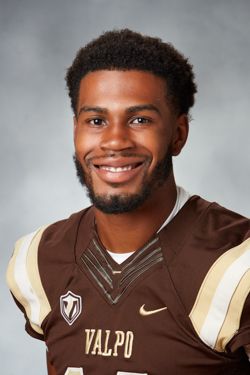 2019: Made his season debut on Nov. 9 vs. Morehead State and saw action in each of the first three games of the season… Registered his lone tackle on the year in the season finale vs. Marist on Nov. 23.

2018: Appeared in all 11 games during his sophomore season… Totaled 36 tackles (20 solos) and accumulated 3.5 TFL for 12 yards including 0.5 sacks… Had a season-high eight tackles on Oct. 6 at Dayton… Broke up three passes on Oct. 20 at Morehead State and finished the season with five pass breakups.

Prep: Was the starting point guard for the varsity basketball team... Participated in track and field, competing on the 4x100 relay that finished first in NEPSTA DII... Also competed in long jump and triple jump... Participated in the school's Diversity program all four years and was the president of the club senior year.

Personal: Son of Brian and Colette Kelly... Born on July 5, 1998... Customizes his shoes in his spare time by painting over them with spray paint... Draws on his backplate with a theme for each game and a theme for that week of practice... Watches a football movie the night before each game, most often Friday Night Lights... Enjoys discussing current events... Majoring in business management with a minor in political science.