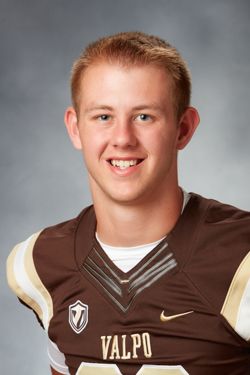 2019: Appeared in all 12 games, totaling one catch for 22 yards on offense while accruing six tackles (five solos) and a forced fumble as a contributor to the special teams unit.

Prep: Was a three-year letter winner… Led the team in receiving yards and touchdowns as a junior and senior… Received First Team All-Conference and All-District Honorable Mention as both a junior and senior… Had 44 receptions, 627 receiving yards, six receiving touchdowns and 130 rushing yards on 19 carries during his senior season… Had 52 receptions, 551 receiving yards, four receiving touchdowns, 186 rushing yards, two rushing touchdowns and 14 carries as a junior… Was also a three-year letter winner in both basketball and track & field… In basketball, he was a captain as a senior and received First Team All-Conference and All-District… Basketball team was a district runner-up his junior year and the conference champion as a senior. He finished with a career record of 56-18… Had a high jump PR of 5-11 while also competing in the 1600-meter relay and 800-meter relay… Was an honor roll recipient as a sophomore, junior and senior.

Personal: Majoring in environmental engineering with minors in math and chemistry… Birthday is April 9… Son of Nen and Heather Berkemeier... Has one sister, Lucy… Enjoys listening to hip hop music and watching Marvel movies, football and basketball.