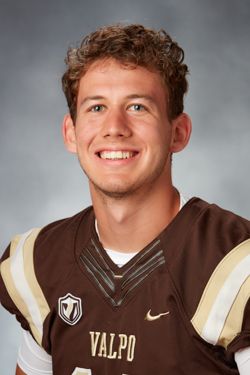 2019: Played in 10 games at the quarterback position and completed 151 of his 307 passes while throwing for 1,658 yards and 10 touchdowns… Was the team’s leading rusher, netting 386 yards on 113 carries while accounting for six of the team’s nine rushing touchdowns… Averaged 38.6 rushing yards and 165.8 passing yards per game… Enters the 2020 campaign already ranking eighth in program history in career passing yards at 3,725 and seventh in total offense at 4,374… Ranked seventh in the PFL in passing yards per game and fifth in total offense (204.4 yards per game)… Ran for a 76-yard touchdown in the Oct. 12 game against Dayton, Valpo’s longest rushing play since 2017, longest offensive play of the season and longest touchdown run since Ozzie Young’s 76 yarder on Nov. 11, 1995 against Kentucky Wesleyan. Duncan’s rush was Valpo’s longest against a Division-I opponent since Young’s 84 yarder on Oct. 22, 1994 against Evansville… Totaled 154 rushing yards in the Oct. 12 game vs. Dayton, becoming the first Valpo player to exceed 150 rushing yards in a game in seven years (Jake Hutson on Nov. 3, 2012 vs. Campbell). He had the most rushing yards by a Valpo QB since Warren Arnold had 172 against Saint Francis in 2007… Made his return to his home state on Oct. 19 at San Diego and scampered across the goal line from 12 and 6 yards out, becoming the first Valpo player to rush for a pair of touchdowns in a game in 2019. It marked his first career game with two rushing scores… Had a career-high 304 passing yards on Nov. 9 vs. Morehead State, throwing for three touchdowns and no interceptions. He completed 30 passes in the game, the second most in a single game by a PFL player in 2019. His 304 passing yards were the most by a Valpo player since Jimmy Seewald’s 316 on Oct. 28, 2017 vs. Morehead State. He also became the first Valpo player since Scott Staal on Nov. 14, 2014 vs. Morehead State (32) to complete 30 or more passes in a game… Enjoyed his first career game with 200+ passing yards and 100+ rushing yards on Nov. 16 at Butler… Member of PFL Honor Roll.

2018: Saw action in 10 games at quarterback and made seven starts… Went 124-of-244 through the air and racked up 1,781 passing yards and 14 touchdowns… Had 48 carries for 132 yards and two scores with rushing TDs coming in the PFL opener vs. Davidson (Sept. 29) and the season finale at Stetson (Nov. 17)… Passed for a career high 302 yards on Oct. 27, then exactly matched that mark on Nov. 10 vs. Jacksonville… Had a career-high 21 completions on Oct. 27 against the Bulldogs, throwing for three scores in that game… Had another three-touchdown performance on Nov. 10 against the Dolphins including a career-long 75-yard pass to Griffin Norberg on the first play from scrimmage… Ranked seventh in the PFL with 178.1 passing yards per game, sixth in pass efficiency at 123.7 and seventh in total offense at 191.3… Member of PFL Honor Roll.

2017: Saw action in 10 games as Valpo’s secondary quarterback… Made his collegiate debut Week 1 at Montana, becoming the first quarterback to finish a game as Valpo’s leading rusher since Eric Hoffman on Sept. 14, 2013 against William Jewell… Also became the first Crusader QB to rush for 50 yards in a game since Bobby Wysocki ran for 101 on Oct. 10, 2009 against San Diego… His 150 passing yards against the Grizzlies were the most by a Crusader in his first collegiate game since Eric Hoffman threw 394 on Sept. 3, 2011 against Franklin College… Duncan also became the first Valpo quarterback to throw a touchdown pass in his debut since Hoffman and the first Crusader to toss two TDs in his initial appearance in over a decade… Completed a season-high 10 passes for 119 yards while rushing for 35 on 13 attempts on Oct. 7 at Campbell… Did not attempt a pass over the last four games of the season… Became the seventh different Crusader to rush for a TD in 2017 with his first career score on Nov. 11 at Butler, a 3-yard sneak with 8:30 left in the third quarter of an eventual 36-28 Valpo win in the Battle for the Hoosier Helmet.

2016: Did not see action in his first season on campus... Kept four years of elgibility... Named to PFL Honor Roll.

Personal: Son of Robert and Lynne Duncan ... major is business.