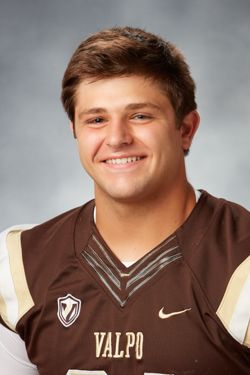 Fall 2021: Played in all 11 games and totaled 38 tackles including 18 solos... Registered six tackles for loss including 1.5 sacks... Blocked two kicks, recovered two fumbles and had one interception... Had a season-high seven tackles on Sept. 25 at Drake... Recovered fumbles on Sept. 18 vs. Dartmouth and Oct. 30 at San Diego... Blocked kicks on Oct. 30 at San Diego and Nov. 6 vs. Presbyterian... Had five or more tackles on four occasions... Returned an interception 20 yards for a touchdown on Nov. 20 vs. Morehead State.

Spring 2021: Started all six games on Valpo’s defensive line… Totaled 12 tackles including three solos and 1.5 tackles for loss… Had 0.5 TFL on April 10 at Morehead State and 1.0 TFL on April 17 vs. San Diego… Eight of his 12 tackles came over the final two weeks of the season including a season-high five in the April 17 game against the Toreros… Member of PFL Academic Honor Roll.