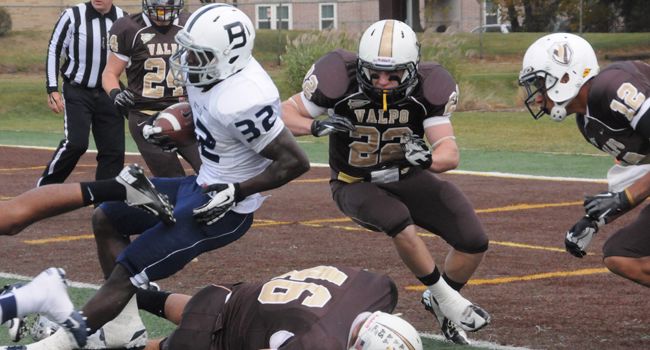 The Valparaiso football team battled through a 43-minute lightning delay Saturday afternoon before falling to Davidson in overtime, 28-27, on Senior Day at Brown Field.

“We didn’t react as well as we should have coming out after the delay,” head coach Dale Carlson said. “Obviously we just didn’t execute in the three phases we needed to today.”

After electing to receive the opening kickoff, the Wildcats put together a 14-play, 87-yard drive that lasted more than seven minutes.  On fourth and one from their own 37-yard-line, the Wildcats kept the drive alive with a 29-yard run by running back Colby Everett on a fake punt.  Following a pair of Davidson penalties, the Wildcats had to settle for a 31-yard field goal attempt.  Funsten, the holder, fumbled the snap and ran it in for a 14-yard touchdown, putting Davidson up 7-0 with 7:52 left in the first quarter.

After the two teams traded punts, the Brown and Gold turned in their first scoring drive of the afternoon.  Starting at its own 16-yard-line, Valparaiso marched 84 yards in eight plays, tying the game on a one-yard run by senior Ryan Lehr (Cincinnati, Ohio/Glen Este).  It was Lehr’s career-long 38-yard run that set the Crusaders up in a goal-to-go situation.

On the final possession of the first quarter, Davidson threatened to take the lead back. The Wildcats marched into Valpo territory, but on the third play of the second quarter, Davidson’s David Rogers fumbled the ball into the hands of defensive lineman Nick Moffitt (San Diego, Calif./Escondido Charter).  It was the first of three fumbles the Crusaders recovered on the afternoon.

Following the fumble, the Crusaders posted their second straight scoring drive. This time it was a nine-play, 60-yard effort that featured a 26-yard catch-and-run by freshman running back Jake Hutson (Blanchard, Mich./Montabella).  The rookie capped off the drive with a four-yard touchdown run, putting the Crusaders up 14-7 with 10:57 remaining in the half.

Three punts later, the Crusaders took over at their own 49-yard-line with 6:12 left in the first half.  The drive would have to wait as the game entered a 43-minute delay following a nearby strike of lighting.

When play resumed, the Crusaders moved into Wildcats’ territory.  On fourth and one from the Wildcats 30-yard-line, Hutson was stopped for no gain, resulting in a turnover on downs.  On the ensuing possession, quarterback Jonathan Carkhuff ran it in from one yard out and the game went into an abbreviated 15-minute halftime tied 14-14.

The Crusaders struggled offensively in the second half, running just four plays inside the Davidson 40-yard-line.  Valpo did not penetrate into Davidson territory in the fourth quarter.

“We really didn’t get any offense the whole second half,” Carlson said. “We didn’t make a couple of those opportunities when we had balls over the top. Those could have been differences in the game.”

Valpo’s lone score of the second half came on a fumble recovery by Devan Gadson (Orlando, Fla./Freedom), which he returned 21 yards for his second touchdown of the season. The Crusaders led 21-14 with 7:46 remaining in the third quarter.

Later in the third quarter, with Davidson driving inside the Valpo two-yard-line, Alex Grask (Naperville, Ill./Central) recovered a Carkhuff fumble and returned it 74 yards to the Davidson 22-yard-line.  Three plays later, the Crusaders appeared to add to their lead on a 29-yard pass to Tim Bennett (Joliet, Ill./Joliet Catholic).  The score was negated by an offensive pass interference call away from the ball.  Backed up near midfield, the Crusaders were forced to punt and Greg Wood (Libertyville, Ill./Libertyville) pinned the Wildcats back at the six-yard-line.

Despite the solid punt, Davidson tied the game with a 10-play, 94-yard drive that stretched into the early portion of the fourth quarter.  With 13:50 remaining in regulation, Carkhuff ran it in from one yard out for his second rushing touchdown of the game.

Neither team scored the rest of the way and Valpo played in its first overtime game since beating Davidson back in October of 2008.  On the first play of overtime, Hoffman hit Hutson for 27 yards on a throw back screen setting up Kuramata’s four-yard touchdown.

Hoffman finished 26-of-39 for 219 yards and a touchdown while Carkhuff was 37-of-56 for 395 yards for the Wildcats, who out-gained Valpo 512-310.  Eric Slenk (Holland, Mich./Christian) caught a team-high seven passes for 59 yards while Hutson hauled in six passes for 54 yards.  Grask recorded 15 tackles while linebacker Pat Derbak (Schaumburg, Ill./Schaumburg) finished with 13 stops, three of which were for a loss.

Davidson’s Reese Williams was the game’s leading receiver, catching 10 passes for 131 yards.  Funsten finished with nine grabs for 65 yards and two touchdowns, including the game-winning score.

Wood punted eight times and averaged 48.9 yards per boot, including two punts of over 60 yards. He also pinned the Wildcats inside the 20-yard-line on five occasions.

Valparaiso (1-9, 1-6) closes out the season next Saturday with a road game against Morehead State.  Kickoff is set for noon from Jayne Stadium in Morehead, Ky.  All the action can be heard live on the Valpo Sports Radio Network (WAKE, 1500 AM, Valparaiso), with a link to listen live online at www.valpoathletics.com, which will also have a link for live stats.