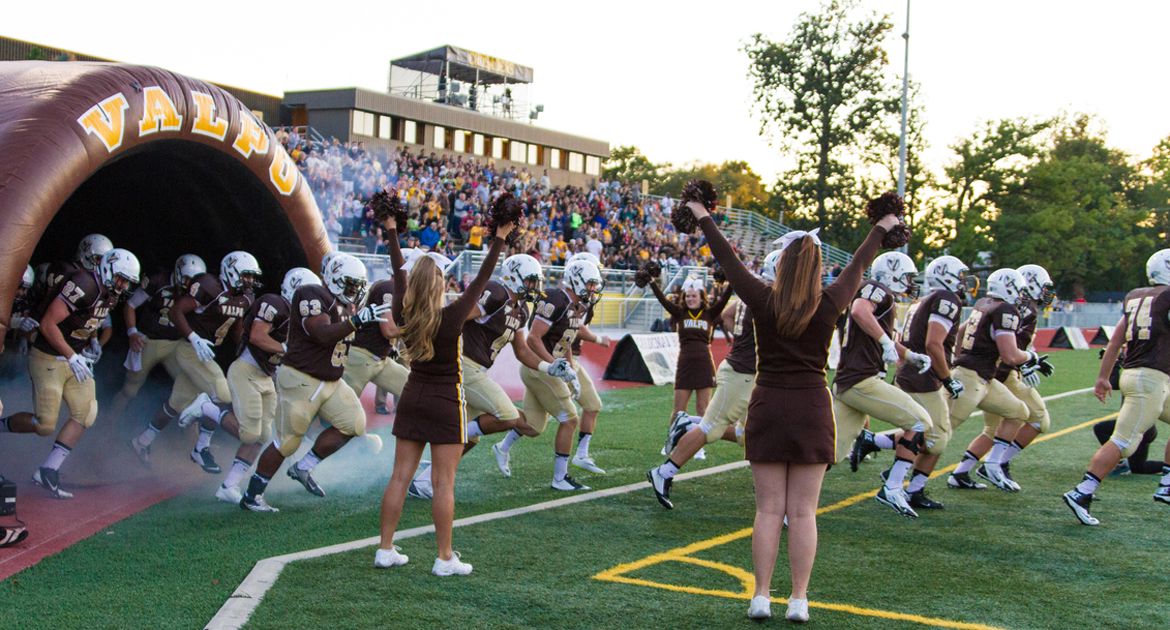 This Week in Crusader Football: After two weeks on the road, Valparaiso returns to Brown Field to face off against Butler in the battle for the Hoosier Helmet. The Hoosier Helmet has resided in Indianapolis since 2008 and Dave Cecchini’s team would love nothing more than to bring it back to Northwest Indiana. The Bulldogs were champions of the Pioneer Football League in 2012 and 2013, but with a 2-4 record in league play, a three-peat is mathematically impossible. A win by the Brown and Gold would not only avenge last year’s 72-12 loss at the Butler Bowl, but would guarantee the Bulldogs their first losing season since 2011.

On the Air: For the ninth straight season, the Valpo Sports Radio Network is home to all 12 Crusader football games in 2014. All 12 games can be heard live on WVUR (95.1FM, Valparaiso), online through www.valpoathletics.com. Todd Ickow will handle all the play-by-play, with Dave Huseman adding the color commentary this week. Links to the audio, and live stats will also be available through www.valpoathletics.com. There will be no video for Saturday’s game.

Head Coach Dave Cecchini: Cecchini is 2-7 in his first year at Valparaiso. His first head coaching win came on Sept. 20th, 2014 when the Crusaders defeated William Jewell 39-30. Cecchini most recently served as offensive coordinator/quarterbacks coach at Lehigh where the Mountain Hawks captured a Patriot League Championship in 2010. His path to Valpo also included stops at Harvard and The Citadel, where he mentored QB Ryan Fitzpatrick and WR Andre Roberts to eventual professional careers. While Cecchini made a name for himself as offensive coordinator at Harvard in 2003, the Crimson compiled the fourth-best offense in the nation en route to an undefeated 10-0 season and an Ivy League Championship. Furthermore, The Citadel set 16 offensive records under his tutelage. As a receiver at Lehigh, Cecchini garnered All-American honors and established numerous single-season school and Patriot League records.

All-Time Series: Saturday represents the 73rd meeting between Valpo and Butler on the football field, the most against any opponent. Butler leads the all-time series over the Crusaders, 48-24, with the Bulldogs having won six consecutive tilts over the Brown and Gold. The Crusaders’ last win over BU came on Oct. 13th, 2007 when they won a 42-37 thriller at Brown Field. In the history of the series, Valparaiso is 13-18 versus the Bulldogs at home including a 6-4 mark in the last 10 meetings.

Scouting Butler: The Bulldogs enter Saturday’s game with one of the higher-upside running backs in the Pioneer Football League. Redshirt freshman Sam Schrader has just 483 rushing yards to his credit in PFL play, but it comes on just 50 carries (9.7 yards/carry). His eight rushing touchdowns in six league games are second only to Dayton’s Connor Kacsor. The rookie has seen an increased workload each of the past three weeks and he rewarded head coach Jeff Voris last Saturday with 162 yards and four scores on 13 carries in the Bulldogs’ 62-52 win over visiting Morehead State. Schrader has done a solid job filling the shoes of Trae Heeter, who graduated this past year. Junior Matt Shiltz also filled in nicely at quarterback for the departed Matt Lancaster for the first five-plus weeks. The St. Charles, Illinois native was on his way to an all-PFL season (1,324 yards, 10 TD; 4 INT, 62.0% comp pct) before an injury at Campbell railroaded his season. Redshirt sophomore Malcolm Weaver is now receiving the lion’s share of snaps under center. Weaver has pitched in four touchdowns and 667 yards on 70 completions. Derek O’Connor (50 rec., 536 yds., 4 TD) and Marquese Martin-Hayes (40 rec., 528 yds., 2 TD) have established themselves as primary targets for Weaver, while Brando Collins (30 rec., 405 yds., 2 TD) has proven to be good for three or four catches a game.

Butler’s defense has allowed 34 points per game, eighth-most in the PFL this season. While that doesn’t necessarily stand out, BU’s front seven has yielded a league-low 3.0 yards per carry in addition to just eight touchdown runs. The Bulldogs have received strong play from middle linebacker Sean Horan, a redshirt sophomore averaging seven tackles a game and who has racked up 8.5 tackles for a loss. Defensive end Bret Shannon has pitched in 10 tackles for a loss, 7.5 of which have come on sacks. In the secondary, senior JoJo Ciancio has snagged three of Butler’s ten interceptions as a team. Fellow safety David Burke has two picks as well. Justin Crull has three fumble recoveries at cornerback for Butler.

Head Coach Jeff Voris: Voris, who guided the Bulldogs to a PFL championship in 2012 and 2013, is in his ninth season as head coach at Butler. The DePauw graduate got his coaching feet wet as a grad assistant at Illinois in 1990. After two seasons with the Fighting Illini, he worked with wide receivers and the offensive line at Texas. Voris later accepted the offensive coordinator position at his alma mater before taking over the Carroll (Wis.) College head coaching job. In five seasons at Carroll, Voris grew the roster from 51 players to 111. In 2005 - his final season there - he delivered the first winning campaign since 1996. Voris took over the reins at Butler in December of 2005. He enters Saturday’s game with a record of 54-48, good for third on Butler’s all-time list for coaching victories.

Morgan’s Matchup: Butler is ranked second in the nation in both punt return defense (1.2 yards) and kickoff return defense (15.03). Freshman Jarrett Morgan has averaged 31.2 yards per KO return including a touchdown since taking over those duties on October 25th at Morehead State.