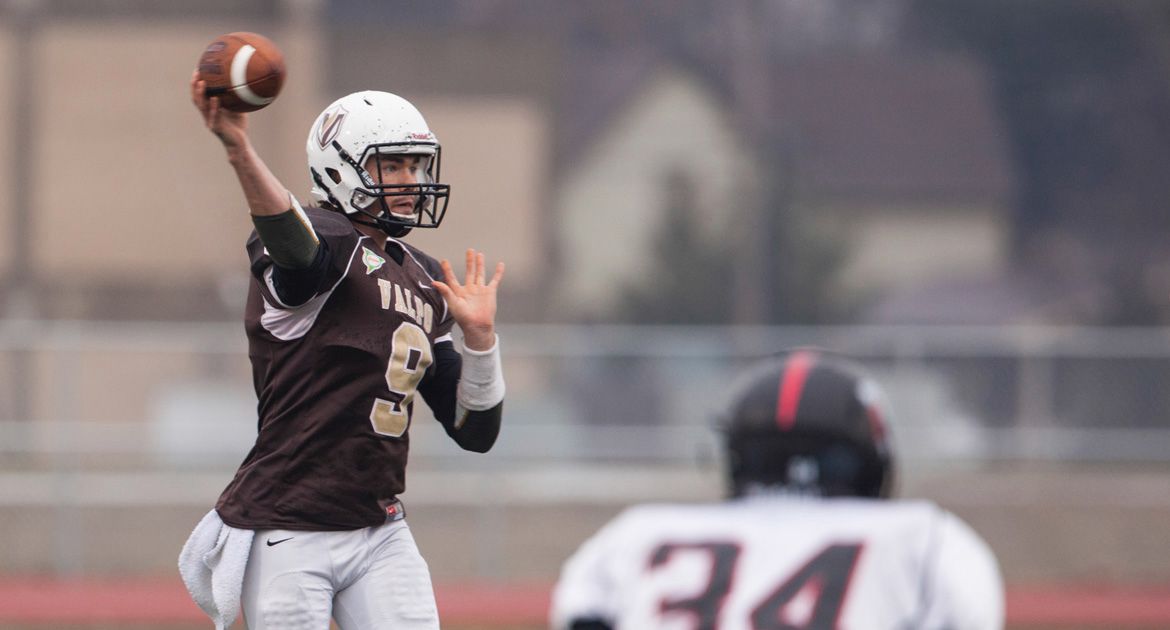 The Crusaders (4-8, 2-6 PFL) put up points in every quarter and amassed 427 yards of total offense in their season finale victory.

"We didn't achieve our goal of winning the Pioneer Football League, but to finish out the season with a win is very satisfying," Cecchini said.

The Wildcats got on the scoreboard first with a nine-play, 80-yard drive midway through the first quarter. Running back Jeffrey Keil recorded 12 of his game-high 132 yards on a touchdown scamper. Keil racked up 107 yards on 19 rushes by halftime.

The tilt remained tied until Lehman led a two-minute drill that produced a Newman field goal.

Valparaiso took over on downs on its own 36-yard line with 37 seconds remaining and all three timeouts.

Lehman hooked up with Kuramata for a 16-yard completion to advance into Davidson territory. Lehman hit Kuramata again on the next play near the Davidson 30-yard line before the Crusader receiver stepped out of bounds to stop the clock. A 16-yard pitch and catch to Fred Gladney (Milwaukee, Wis./Dominican) set the stage for Newman to give Valpo a 10-7 lead heading into the break. The sophomore split the uprights from 36 yards out to do just that.

The Crusaders edged the Wildcats on total offense in the first half, 187-172.

Valpo added an insurance score on its opening possession of the second half.

Lehman capped off an eleven-play, 80-yard strike with a 20-yard touchdown toss to Cassara. The scoring drive took just over five minutes.

The Crusaders were knocking on the door late in the third quarter before a turnover halted their drive. Gladney corralled a Lehman throw at the Davidson five-yard line before the Wildcats' William Curran forced a fumble that teammate Colin Merrill recovered at the 3.

Subsequently, Davidson marched 97 yards downfield to trim the Valpo lead to 17-13. Keil registered his second rushing touchdown of the afternoon as he plowed in from the one-yard line.

The Brown and Gold squashed any chance of a Davidson comeback on the ensuing kickoff. Morgan zigzagged his way 74 yards on the return to give Valpo prime field position.

Lehman went right to work, connecting with Bastin on an 11-yard pass. The next snap yielded Cassara's second touchdown catch from Lehman as the two made it a 24-13 game with an eight-yard passing play.

Newman added a 21-yarder with three minutes to play as the Crusaders clinched a 27-13 victory in their season finale.

Lehman logged 26 completions on 33 pass attempts as he threw for 284 yards (second-highest total of 2014) and two touchdowns. His 78.8% completion percentage was his most accurate of the season.

Kuramata tied Davidson's William Morris for a game-high 122 receiving yards on ten catches. He concludes his Valpo career with the fifth-most receiving yards in school history (2,315).

Valpo wrapped up the 2014 campaign at 4-8, a season that produced as many wins as the last five combined. Their two wins in PFL play matched the highest total since 2003.