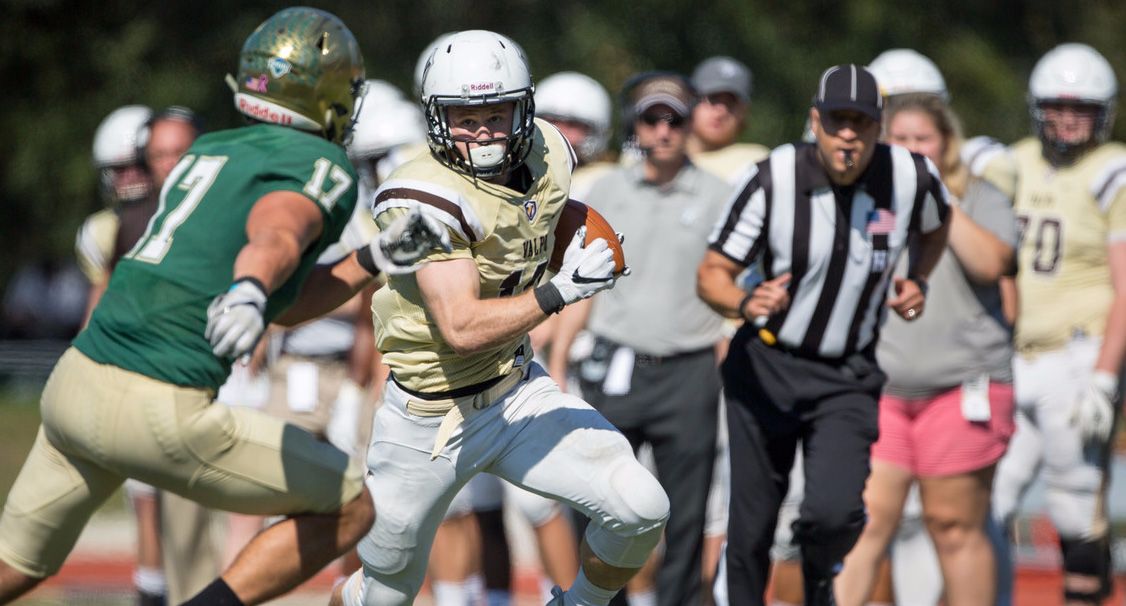 Jarrett Morgan will play in the final game of his Valpo career on Saturday at Brown Field.
Dayton at Valparaiso | November 18, 2017
Related Links
Related Links

This Week in Crusader Football: Going on the road to defeat rival Butler and winning the Hoosier Helmet? That’s hard to top. But sending off the seniors by beating perennial Pioneer Football League power Dayton at Brown Field to secure the program’s first winning season since 2003? That’d be about as special as it gets. The stage is set for what figures to be a competitive showdown between two evenly-matched teams who enter the game with identical records both overall and in league play. The Crusaders would enjoy nothing more than to craft an unforgettable ending to a memorable season.

Last Time Out: There’s winning a regular season football game, and then there’s winning the PFL’s greatest rivalry game. Last week fell into the latter category. Facts and figures from last week’s game are numerous, but the stat that matters most is as follows – Valpo 36, Butler 28. Jimmy Seewald completed touchdown passes to three different players – Jean Rene, Donny Navarro and Jarrett Morgan. Backup quarterback Chris Duncan found the end zone for his first career rushing touchdown, while Dimitrios Latsonas converted three key field goals. The defense did its part as well, including Jalin LeAndre, who came up with an important interception, and Tristan De La Rosa, who recovered a fumble at the end of the interception return.

Following the Crusaders: For the 12th straight season, WVUR (95.1 FM, Valparaiso) is home to all 11 Crusader football games in 2017. Todd Ickow is back for his 25th season as Valpo’s play-by-play broadcaster, Huseman is in his fifth season as the team’s color commentator. Saturday's game will also air on ESPN3. Links to live video, audio and stats will be available on ValpoAthletics.com.

Head Coach Dave Cecchini: Cecchini is in his fourth season as the head coach of the Crusaders. He enters this week with a 14-29 record, both overall and in three years at Valpo. In his first season as head coach of the Crusaders, Cecchini led the program to a four-win season, its highest win total since 2007. His team matched the four win total in 2016, Cecchini’s third year. Prior to arriving at Valpo, Cecchini served as offensive coordinator/quarterbacks coach at Lehigh for four years.

Series Notes: The Crusaders are hoping to turn around their fortunes in a series that has been heavily slanted in Dayton’s favor since the two teams hooked up for the first time in 1988. The Flyers have captured 24 wins in 26 meetings with the only Valpo triumphs coming in 2000 and 2003. The 2003 game was a 33-28 Valpo victory in Dayton, while the only Crusader win over Dayton at Brown Field was 16-15 in 2000. Valpo has dropped 13 straight, including last year’s 37-21 defeat at Welcome Stadium. Last year’s game was the closest Valpo-Dayton matchup since 2003.

Defending Brown Field: The confines of Brown Field have provided a true edge for the Crusaders this season. Valpo has won four straight PFL home games, dating back to last year’s season finale, the program’s first such streak since 1999-2001, when Valpo won five straight league games at home. Saturday presents the Crusaders with a chance to finish the season undefeated in PFL home games. Regardless of Saturday’s outcome, Valpo will finish with a winning record at home for the second consecutive season after going above .500 in games played at Brown Field for the first time since 2004 in 2016. The Crusaders are 3-1 at home this year and the only loss was by five points to scholarship foe Duquesne. The Crusaders have won three PFL home games in the same season for the first time since 2003 and have a chance for four league home wins in the same year for the first time in program history.

A Look at the Standings: San Diego has locked up the PFL title with a 7-0 record entering the final week of the season, but after that there are six teams within 1 ½ games of each other. With a win on Saturday, Valpo will finish in a three-way tie for third with the Drake/Jacksonville loser and Campbell. If Valpo falls on Saturday, the Crusaders will finish in a tie for sixth with Butler in the 11-team league. Regardless of Saturday’s outcome, the Crusaders will finish with at least four teams behind them in the standings for the first time since 2003.

Crusaders in Season Finales: The Crusaders have had good success finishing the season out on a high note during the Dave Cecchini era, claiming victories in two of their last three season finales. Valpo topped Jacksonville to close the regular season in 2016 and Davidson in 2014 with both of those games taking place at Brown Field. Before the 2014 season, Valpo hadn’t closed out the season with a victory in a PFL game since 2004.

300 Club: Valpo has scored 322 points this season, last week cracking 300 points in a single year for the fourth time in program history and just the second time since 1951. Valpo needs seven points or more on Saturday to finish with the second-highest single-season team point total in program history. The program record for total points in a season is 406 in 2003, though 54 of those came in the PFL Championship, the team’s 12th game of the season. Valpo is averaging 32.2 points per game, which would rank fourth in program history. The 2003 season is currently third at 33.8, while the 1954 season entered this year fourth at 29.6.

Finding the End Zone: Valpo has 39 total touchdowns this season, which already puts 2017 in a tie for fourth in program history. Valpo could finish as high as third in that category if they reach the end zone three or more times on Saturday.

Rushing Prowess: One more rushing touchdown would give the Crusaders 20 rushing TDs this season, which would mark the sixth time in program history and the first time since 2000 that Valpo has rushed for 20 or more scores in a single year.

Special Teams, Special Season: It’s been a noteworthy season for Valpo on special teams as well, as the Crusaders have 11 made field goals, which ranks fifth in program history. The program record for team field goals in a season is within reach, as the 2003 team made 14. Valpo had 13 field goals in 2002 and 1984 and 12 in 2000.

Latsonas Honored: Kicker Dimitrios Latsonas has accounted for all 11 of the team’s field goals this season, including three in last week’s win over Butler. That performance earned him the Pioneer Football League Special Teams Player of the Week award for the second time this season. Those three makes helped Latsonas crack the top five for made field goals by an individual in single-season program history, as he is now tied for fourth with Andrew McCawley, who had 11 in 2003. One more will move him into a three-way tie for second with Jacob Newman (2014) and Adam Hudak (2002), while two field goals on Saturday would allow Latsonas to match Kevin Mackey’s program record of 13, which has stood since 1984. Latsonas already etched his name into the program record book last week, reaching his 35th made PAT of the season. He shattered the previous record of 34, which was shared by McCawley (2003) and Eric Strasser (1999). Latsonas has scored a team-high 68 points this season, two away from cracking the program’s Top 5 in that category.

Navarro Keeps Catching Passes: Freshman Donny Navarro has continued to impress as he leads the team with 32 catches for 539 yards and five touchdowns. He moved past 500 receiving yards for the season on Saturday, becoming just the fourth Crusader in the last 10 years to hit 500, joining Tanner Kuramata, Andrew Cassara and Sean McCarty.

Scouting Dayton: The Flyers were picked to finish second in the PFL Preseason Poll, behind only defending champion San Diego. Dayton received two first-place votes, the only team other than San Diego to collect first-place tallies. Dayton went 7-1 in league play in each of the last two seasons, sharing the league title in 2015 before finishing as the runner up in 2016. Quarterback Alex Jeske led all PFL QBs in rushing yards a year ago. This year, he’s played in five games after returning from an injury and is throwing for an average of 223 yards per game (56-of-98 passing). Dayton has a quality punter as Sean Smith leads the league with a 42.5 average. The leading receiver is Adam Trautman, who has 37 receptions for 457 yards and four touchdowns, while Tucker Winger leads the rushing attack with 892 yards and four scores on 170 carries. This is Rick Chamberlin’s 10th season as Dayton head coach and his 42nd with the program as a player, assistant coach and head coach. The Flyers need a win on Saturday to avoid their first losing season since 2006. Dayton’s scoring offense is eighth of 11 at 23.1 points per game and their total offense is 10th of 11 at 354.3 yards per game, but their strength is their defense, which is limiting opponents to 20.9 points per game, second in the league behind only San Diego. Playing over half of the season without their starting QB, Dayton’s passing offense is 10th in the league at 182.1 yards per game. The Flyers are 4-1 since Jeske’s return from injury. Their defense has made 15 interceptions, second in the league behind only Campbell. Dayton owns a league-leading plus-12 turnover margin. They had a bye last week and carry a three-game winning streak into the season finale with victories over Davidson (48-22), Butler (27-22) and Marist (36-17).