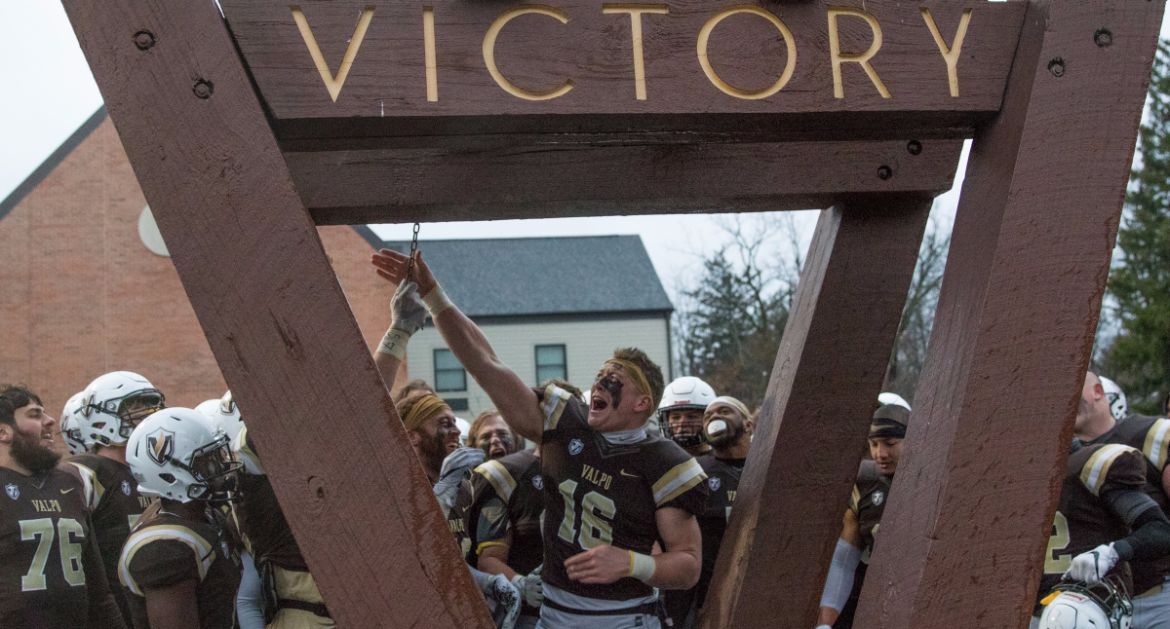 The farewell tour for nine Valparaiso University football seniors had a majestic final stop on Saturday afternoon at Brown Field.

With the Crusaders trailing visiting Dayton 7-0 with 1:20 left in the fourth quarter, senior running back Jarrett Morgan (Cooper City, Fla. / Cooper City) found the end zone on a 1-yard run to cut the deficit to one. The special teams unit stayed on the sideline and the offense remained on the field as Valpo rested the game’s fate in a gutsy two-point try. Morgan took the snap and found fellow senior Ryan Clarke (Hopatcong, N.J. / Hopatcong) for the conversion, creating a joyous scene in Porter County and giving the Crusaders an 8-7 edge.

“That was a play we had put in a couple weeks ago and we talked about that play on Tuesday or Wednesday morning as an offensive staff,” head coach Dave Cecchini said. “We said, ‘Wouldn’t that be great if we could get Morgan and Clarke involved in a situation like that?’ We had it as our two-point play, and it just felt right. Going for two was a tough decision to make, but it seemed fitting to put the game in their hands.”

From there, the defense did what it had all day long – held strong. The Flyers started their final drive by moving the chains with a 19-yard pass completion to the Dayton 44, but four consecutive incomplete passes followed. Redshirt senior J.J. Nunes (Baltimore, Md. / Baltimore Lutheran) delivered the hit for the pass breakup on the fourth-down play, lifting the Crusaders to their first winning season since 2003 and allowing the team to take down Dayton for the first time since that same year. The loss sent the Flyers to just their second losing season in the last 41 years.

The Crusaders held a Dayton team that hasn’t been shutout since 1976 off the scoreboard for the first three quarters. The only thing that kept the Flyers’ national-record 465 game streak of not being shutout intact was a 30-yard TD pass from Alex Jeske to Adam Trautman early in the fourth.

“It was our defense’s finest hour,” Cecchini said. “With the weather conditions the way they were, we knew this was going to be a defensive battle and a battle of field position. Our defense stepped up time and time again. We’ve gotten so much better from the start of the season to now. Today was the epitome of not backing down.”

Dayton didn’t score on any of its three red-zone chances, including a fumble at the Valpo 1 that was recovered by fifth-year senior Jay Slone (Kankakee, Ill. / Bishop McNamara) on the Crusader 4-yard line on a third-and-goal play early in the second quarter. The dynamic junior linebacker duo of Nick Turner (Gurnee, Ill. / Warren Township) and Drew Snouffer (Columbus, Ohio / Upper Arlington) teamed up on Dayton’s second lost fumble, with Turner forcing and Snouffer recovering near midfield with Valpo down seven early in the fourth.

Following that fumble recovery, Valpo went on an 11-play, 36-yard drive that ended in a missed 26-yard field goal try with under five minutes remaining. The defense got a quick punt with just over two minutes ticking off the clock, setting up the five-play, 39-yard scoring drive that will be talked about on Valpo’s campus for years to come.

Morgan’s touchdown run was proceeded by quarterback Jimmy Seewald (Livonia, Mich. / Divine Child) completing his longest pass of the day. Yet another senior, Frank Catrine (Springboro, Ohio / Bishop Fenwick), was on the receiving end of the 29-yard heave that set up first-and-goal.

Fifth-year seniors Nunes and Slone, the final players in the program who predated Cecchini and his staff, went out by helping a team that had two one-win seasons in their first three years on campus finish in front of six teams in the league standings for the first time since 1954 and the second time in program history.

“We have some of the best coaches in all of Division I in my opinion,” Nunes said. “They bring a lot of experience from various backgrounds. They have a blueprint for having success with the type of football that our league presents. They’ve made such amazing changes with the program. They’ve changed the entire attitude of our team.”

Clarke was Valpo’s starting quarterback for a season and a half, but the emergence of Seewald led to a position change for the New Jersey native. Clarke stuck with the program, making contributions this season as the primary long snapper and as a backup tight end.

“Ryan personifies what our program is all about,” Cecchini said. “He is a special player and a special human being. He did a great job at quarterback, but he was willing to say, ‘Hey Coach, wherever you need me, I’m ready to help us win football games.’ That was most important to him, and that’s a team football player. To see him finish his career with that two-point play is something I’m going to remember for the rest of my life.”

Valpo hadn’t defeated Dayton – a team that entered Saturday with a 114-36 all-time Pioneer Football League record – since Oct. 11, 2003. Since that game, the Flyers had beaten the Crusaders by an average of 32 points per game during their long winning streak in the head-to-head series.

The eight points marked the fewest scored by Valpo in a victory since defeating Indianapolis 6-3 on Oct. 26, 1991. The Crusaders went undefeated in PFL home games and finished 4-1 at home with the only loss coming to scholarship foe Duquesne by five points. Valpo won four league home games in the same season for the first time in program history.

The Crusaders finished in a three-way tie for third in the PFL after being picked to place 10th of 11 in the preseason poll. Valpo won four of its last five games to finish with six wins for the first time since 2003.

“Coming off a huge win against Butler and winning the Hoosier Helmet, it was really important to dedicate this week to our seniors,” Cecchini said. “As a first-time head coach, there’s a special bond with your first recruiting class, one that words really can’t describe. Many of these guys took a tremendous leap of faith coming to Valpo from all over the country based on the word that we were going to turn this program around and become competitive. I owe these guys a debt of gratitude. To see these seniors experience this success is a magical feeling. I’m amazingly proud of what they’ve done for me personally and for the program and this University.”