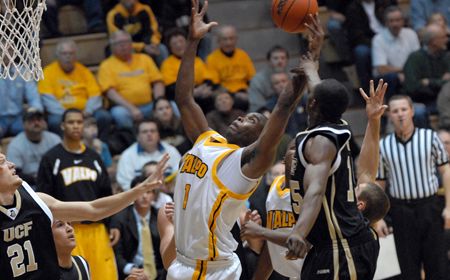 Detroit’s Woody Payne split a pair of free throws with 2.3 seconds to play Saturday afternoon in Detroit, Mich., accounting for the final margin as Valparaiso fell to the Titans, 56-55.

“I was very disappointed with the way we played today,” said Crusader head coach Homer Drew.  “We took a couple steps forward the last few games, but today was a giant step backwards.  We especially shot very poorly from the free throw line (10-22, 45.5%), which is not something we can have if we want to win games.”

Valpo took its first lead of the second half nearly 15 minutes into the stanza, as Howard Little (Chicago, Ill./Stoneridge [Calif.] School) knocked down a 3-pointer and then on the Crusaders’ next trip found Michael Rogers (Kingston, Jamaica/Redemption [N.Y.] Christian) for another triple to give Valpo a 49-47 edge with 5:14 to play.  Detroit’s Chris Hayes quickly responded with back-to-back baskets, however, to put the Titans ahead 51-49 with 3:47 left.

The teams began trading baskets, as Urule Igbavboa (Oakdale, Minn./Tartan) tied it up with a layup out of a timeout with 3:17 to play, but the Titans’ Michael Harrington converted an old-fashioned 3-point play around the media timeout to give Detroit the lead back.  Erik Buggs (Memphis, Tenn./Mitchell) got a second-chance layup on Valpo’s next trip to cut the deficit to 54-53.

The Crusaders made a pair of stands on the defensive end to get the ball back with a chance to take the lead, and after missing a pair of shots, Little was fouled in the scramble for a rebound and sent to the free throw line for a one-and-one.  The sophomore stepped up and calmly drilled both to give Valpo a 55-54 advantage.  But he was then called for a foul while attempting to take a charge on the defensive end, sending Eulis Stephens to the line for two shots with 17 seconds to play.

Stephens hit the first, but missed the second, and Igbavboa pulled down the rebound as the Crusaders would seemingly be able to hold for the last shot.  But Buggs slipped and lost control on the offensive end, and Payne swooped in for a steal with an open court ahead of him before getting fouled with 2.3 seconds to play.  He missed the first shot, but nailed the second, and Valpo’s long inbounds attempt sailed out of bounds.

The early going looked like it would be Valpo’s day, as after giving up the first four points, the Crusaders put together a 16-5 run to go ahead 16-9 just over ten minutes in, led by six points during the stretch from Rogers.  But poor free throw shooting curtailed Valpo’s attempt to extend the lead any further, and the Titans took advantage, going on a 14-1 run of their own to take a six-point lead.  The halftime lead was 29-26 for Detroit, which save for one brief tie early in the second half, held a slim lead until Little and Rogers’ back-to-back triples late in the stanza.

“The missed free throws in the first half really cost us,” said Drew.  “We had a shot to go ahead by even more than seven points and couldn’t take advantage, and instead of demoralizing Detroit, that gave them confidence to came back and take the lead from us.”

Rogers led the Crusaders with 12 points, reaching double figures for the first time in the last five games, while Little scored 11, his sixth time hitting double figures in the last seven outings.  Buggs added nine points and a game-high five assists, while Igbavboa scored eight points, moving into a tie for 20th all-time in Valpo history in the category, and grabbed six rebounds, tying for eighth all-time in that category.

Hayes, who did not play in the first meeting between the two schools, led all scorers with 20 points on 8-of-11 shooting and also led all players with nine rebounds.  Harrington and Stephens each chipped in ten points apiece for Detroit (7-16, 2-11 Horizon).

Valparaiso (6-18, 3-10 Horizon) returns home next weekend to continue league play in a rare Friday evening game at the ARC.  The Crusaders will host Loyola at 7 p.m. on the 13th, and as always, all the action can be heard live on the Valpo Sports Radio Network (WVUR, 95.1 FM, Valparaiso; WAKE, 1500 AM, Valparaiso; WEFM, 95.9 FM, Michigan City) and online at www.valpoathletics.com.  Live video and statistics will also be available through the official Crusader website.