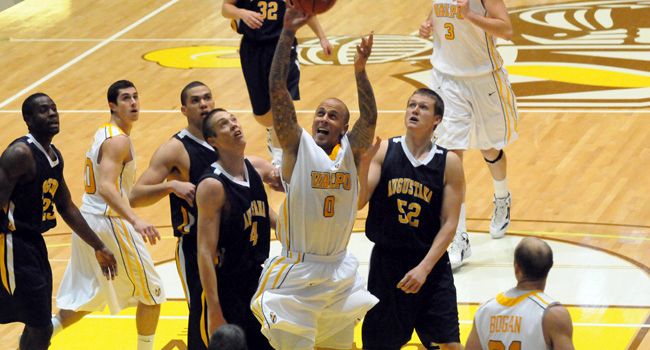 Valparaiso placed four players in double figures in the scoring column and led by as many as 24 points in the second half en route to a 74-65 victory over Augustana Thursday evening at the ARC in exhibition action.

“I was very proud of our team tonight, because I thought we made big strides from our first exhibition game on Saturday,” said Crusader head coach Bryce Drew.  “I thought our defensive pressure was very good.  We had to play small quite a bit, and our guards really did a good job putting pressure on the perimeter, which helped cause 22 turnovers.”

“I thought Matt came out with a lot of energy tonight,” said Drew.  “He’s had a good week of practice and has really been working hard on his shooting, and it showed tonight (three 3-pointers).  I think we also saw some good improvement from Will.  He really looked a lot more confident from Saturday to today.  Will hasn’t gotten a lot of game shots recently, and he should just keep getting better the more attempts he gets up.”

The aforementioned quartet combined for nine 3-pointers on the evening, as the Crusaders ended the night 11-of-25 (44%) from behind the arc.  Valpo was also solid at the free throw line, converting 82.6% (19-of-23) from the charity stripe.  Broekhoff made all six of his free throw attempts, while junior Kevin Van Wijk (Hoofddorp, Netherlands/Katholieke Scholengemeenschap Hoofddorp) went 5-of-6 from the line.

Four early free throws by Broekhoff jump-started an 8-1 start to the game for Valpo, as Kenney followed by assisting on a Van Wijk layup and a deep two-pointer from Bogan.  The lead extended to double figures just 7:44 into the game on a 3-pointer by sophomore Jay Harris (Aurora, Ill./Oswego East) and reached as many as 15 points in the first half.

Augustana, which entered the exhibition game ranked #2 in the nation in Division III, crawled to within 26-21 with 4:54 to go in the half, but threes by Bogan and Broekhoff were part of an eight-point spurt that pushed the lead back to double figures.  The Crusaders eventually took a 38-27 lead into the locker room.

The Vikings got a 3-point play on their first possession of the second half to cut the lead into single digits, but seven straight points by Valpo, capped by another Bogan triple, made it 45-30.  Then, with Augustana within 48-38 with 13:12 to go, the big run started on back-to-back baskets by redshirt junior Erik Buggs (Memphis, Tenn./Mitchell) and redshirt sophomore Hrvoje Vucic (Split, Croatia/Faust Vrancic).

A pair of great defensive plays in the backcourt from Buggs and Broekhoff led to two straight fast-break conversions by the latter, pushing the advantage to 56-38.  Valpo eventually made it a 20-point lead on a conventional 3-point play from Edwards with nine minutes remaining, and ran the lead up to as much as 74-50 with 5:39 to go before the Vikings made a late run to cut into the lead before the final buzzer.

Van Wijk led the Crusaders on the boards with seven caroms, six of which came on the offensive end, in just 12 minutes of action.  Kenney dished out a team-best four of Valpo’s 15 assists on the evening.  The Crusaders dominated in points off turnovers, converting 22 Augustana miscues into 35 points.

Bryant Voiles led all players with 25 points and six steals to pace the Vikings, while Brandon Kunz also reached double digits with 10 points.  Augustana also out-rebounded the Crusaders by a 37-30 count, with Troy Rorer pulling down 10 rebounds.

Valparaiso opens the regular season as part of the 2K Sports Classic Benefiting Coaches vs. Cancer this Monday evening, November 7, as the Crusaders travel to Tucson to take on #16/16 Arizona.  The game will be televised live on ESPNU at 8 p.m. CST.  All the action can also be heard live on the Valpo Sports Radio Network and online at www.valpoathletics.com, which will also have a link for live stats.