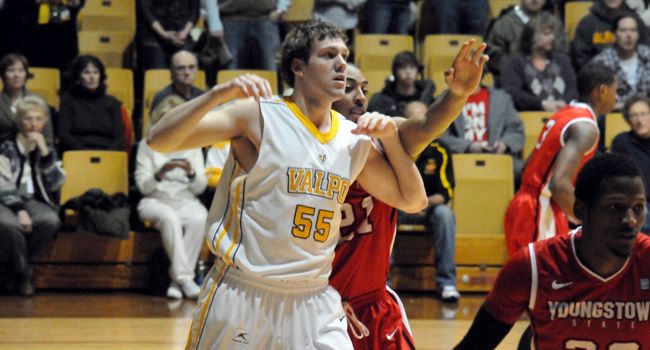 “We knew that Youngstown State was a very good team entering today’s game,” said Crusader head coach Bryce Drew.  “I think our guys were very excited coming into tonight to play another game, to get back on the floor after last weekend.  We came out tonight with a lot of energy to start the game, and really did a good job carrying that energy throughout the game.”

Going up against one of the nation’s top shot-blockers in YSU’s Damian Eargle, Van Wijk didn’t back off from his usual aggressive style of play in the post, going inside time in and time out.  The junior finished the night 7-of-14 from the floor and also got to the free throw line 11 times, hitting nine of his attempts, for his career-best 23 points.  Van Wijk also grabbed seven rebounds and rejected a pair of Penguin shots.

But Van Wijk got plenty of help on Friday.  Junior Ryan Broekhoff (Frankston, Victoria, Australia/Australian Institute of Sport) had his usual consistent game, ending the night with 14 points and eight rebounds.  Junior Richie Edwards (Lakeland, Fla./Lakeland [Hillsborough C.C.]) had a good game in the post as well, coming off the bench to spell Van Wijk for 18 minutes and scoring 12 points on 6-of-10 shooting.  Meanwhile, redshirt junior Will Bogan (Boise, Idaho/Vallivue [Ole Miss]) completed the quartet in double figures with 11 points, including a 3-of-5 effort from behind the arc.

The Crusaders got off to a rough start Friday, committing four turnovers in the game’s first five minutes as Youngstown State claimed an early five-point lead.  It took Valpo just over two minutes to erase the five-point deficit and take a lead of its own, however, as Broekhoff completed a 3-point play during the spurt.  The game would remain tight for the next few minutes, with Youngstown State going ahead 18-17 on a triple by Blake Allen with 8:32 to go in the first half.

An eight-point run over the next 1:30 would give the Crusaders the lead for good.  Redshirt junior Erik Buggs (Memphis, Tenn./Mitchell) found junior Ben Boggs (Roanoke, Va./Hidden Valley [Virginia Tech]) for a 3-pointer to start the spurt, and then Buggs found Edwards inside for a layup to make it a four-point lead.  After another Penguin miss, Buggs tallied his third straight assist, hitting Bogan for another triple to put Valpo ahead 24-17 and force a YSU timeout.

Twice in the final minutes of the first half, the Penguins threatened to be within a possession, but both times Valpo held off the YSU advance.  Ashen Ward moved YSU within 26-22 with 2:19 to go in the half, but two trips later, Bogan canned another trifecta to push the lead to seven points.  Then, with the lead at 29-24 and just a few seconds differential between the game and shot clocks, Valpo killed most of the clock before eventually running a set play for Broekhoff, who knocked down a 3-pointer in the waning seconds to make it 32-24 Crusaders at intermission.

A quick six-point spurt covering just 32 seconds pushed the Crusader lead ahead early in the second half.  Broekhoff absorbed a flagrant one foul on the fast break, splitting his pair of free throws.  Then, on the ensuing offensive possession, Van Wijk completed an old-fashioned 3-point play to finish the four-point trip.  After a Penguin miss, the Crusaders got out and ran, with Buggs eventually finding Broekhoff for a fast-break layup to make it 40-27 Valpo with 16:32 to play.

Valpo’s lead would grow to as much as 15 in the first 10 minutes of the second half, giving the Crusaders plenty of breathing room.  They then answered each time YSU cut the lead to seven points the remainder of the game.  The Penguins were within 48-41 with 11:25 to go, but Van Wijk hit a pair of free throws to push the lead back to nine.  Then, after Blake Allen hit a long jumper to cut the margin to seven, junior Matt Kenney (Mooresville, Ind./Mooresville) found Van Wijk inside for a layup to make it 52-43.

Four straight points from the Penguins, capped by a fast-break jumper from Kendrick Perry, moved the Penguins within 57-50 with 7:30 to play, but Van Wijk remained relentless inside on the next possession, finally finishing on his third attempt inside of the trip.  Perry responded with a pair of free throws, but Broekhoff came back and knocked down his second big 3-pointer of the ballgame to make it 62-52 Valpo with 6:26 remaining.  The lead never fell into single digits again, as Broekhoff’s triple began a 9-0 spurt to salt away the ballgame.

Valpo also got nine points and five assists without a turnover off the bench from sophomore Jay Harris (Aurora, Ill./Oswego East), as well as a game-high six assists against just one turnover by Buggs, as the Crusaders closed the night with a season-best 20 assists against just a D1 season-low seven turnovers.  Boggs hit the glass to the tune of eight rebounds, helping the Crusaders secure a 39-33 rebounding edge over the Penguins.  Eight Valpo players took the court Friday, all playing at least 18 minutes.

“We were able to get eight guys at least 18 minutes each, and all of them played extremely hard,” said Drew.  “I thought those bench minutes [Edwards 18; Harris 25; Kenney 26] were really important, allowing our intensity to stay at a high level throughout.  We really played very aggressively the whole game.”

Valparaiso (11-7, 4-2 Horizon) closes out the home weekend on Sunday afternoon with a 1:35 p.m. tip against league co-leader Cleveland State.  As always, all the action can be heard live on the Valpo Sports Radio Network and seen online on the Horizon League Network.  Links to both the audio and video webcasts, as well as live stats and the Valpo Gameday page, will be available at www.valpoathletics.com.