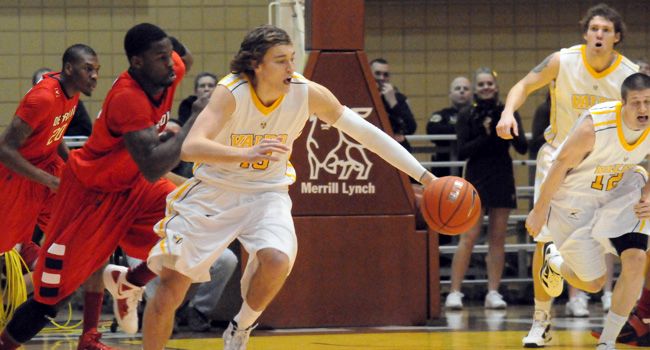 For the second straight game, Valparaiso erased a double-figure second-half deficit, as a career-high 26-point performance from junior Ryan Broekhoff (Frankston, Victoria, Australia/Australian Institute of Sport) helped lead the Crusaders to a 78-73 victory over Detroit Thursday evening at the Athletics-Recreation Center.

Broekhoff matched the Crusaders’ program record for most 3-pointers in a game without a miss on Thursday, draining all six of his 3-point attempts to tie the mark set by Jared Nuness at Belmont in 1997.  The six triples also tied Broekhoff’s career high in a single game, set at Loyola his freshman year, while the junior’s 26 points surpassed his previous career best of 23 points from last season at Ohio.

“Watching film coming in, we thought Detroit was playing the best its been playing all season long,” said Crusader head coach Bryce Drew.  “I think they came out and really took it to us in the first half; playing more aggressively and executing better.  After halftime, I think our guys dug in and played with a lot of heart – I think that with our team defense, boxing out and team rebounding, we really came together in the second half and were able to come back and earn the win.”

In a start of the second half reminiscent of last time out at Milwaukee, the Crusaders surrendered a pair of early baskets and trailed by 10 points at 49-39 with 19:06 to play.  But a 3-pointer from junior Richie Edwards (Lakeland, Fla./Lakeland [Hillsborough C.C.]) and a coast-to-coast layup by Broekhoff accounted for the next five points and extinguished any hopes of the Titans extending their lead.

The Titans’ lead was still eight at 55-47 five minutes into the half before a big sequence saw sophomore Jay Harris (Aurora, Ill./Oswego East) get fouled on a shot attempt, followed immediately by a technical foul to a Detroit player.  Harris stepped up and hit all four free throw attempts to slice the lead in half, and then contributed a 3-pointer at the 12-minute mark as the Crusaders continued to slowly crawl back towards even, trailing 58-55 at that point.

While the defense helped keep Detroit stagnant, limiting the Titans to just 15 points over the game’s final 13 minutes, Valpo kept chopping away at the lead.  Back-to-back fast-break finishes by junior Kevin Van Wijk (Hoofddorp, Netherlands/Katholieke Scholengemeenschap Hoofddorp) moved the Crusaders within 60-59 with under eight minutes to go.  After the teams traded buckets, Broekhoff got koose from deep up top on an inbounds play and canned his fifth trifecta of the night, giving Valpo a 64-62 lead with 5:41 remaining, its first lead since four minutes to go in the first half.

The junior then stepped up for his sixth triple at an even bigger juncture, as with the score tied and just over four minutes to play, Broekhoff found himself open on the right wing and after a brief hesitation let loose with his record-tying 3-pointer to give the Crusaders the 69-66 lead.  Redshirt junior Erik Buggs (Memphis, Tenn./Mitchell) stripped the ball on the other end, starting a fast break which ultimately culminated with an Edwards layup to push the lead to five points with 3:43 to go.

Valpo would do the rest of its damage from the free throw line after a Chase Simon 3-pointer cut the Crusader edge to 71-69 with two minutes to play.  The Crusaders hit just one of their first four from the line down the stretch, but forced a turnover and a missed shot from in close on the defensive end to maintain the lead.  Valpo then ended the night by hitting its final six from the charity stripe, with Van Wijk hitting a pair and Broekhoff adding four.

The first half was played at an extremely high-scoring clip, as Detroit would eventually claim a 45-36 halftime lead.  Broekhoff combined with redshirt junior Will Bogan (Boise, Idaho/Vallivue [Ole Miss]) for Valpo’s first 17 points, as Broekhoff had 11 early while Bogan canned a pair of triples within the first eight minutes.  However, Detroit still led 20-17 at that point.  The Crusaders would briefly re-gain the lead with just over four minutes to play in the half, as back-to-back 3-pointers by junior Matt Kenney (Mooresville, Ind./Mooresville) and Bogan put Valpo ahead 32-31, but the Titans closed the half on a 14-4 run.

Broekhoff was assisted on the offensive end by the efforts of Edwards, who came off the bench to contribute 16 points and a team-high six rebounds in 21 minutes.  Van Wijk closed out a trio of Crusaders in double figures as his late free throws gave him 10 points on the evening.  Led by Broekhoff’s record-tying night from downtown, Valpo shot 54.5% (12-of-22) from behind the arc and maintained that clip overall from the field while assisting on 17 of its 24 field goals.

Five Detroit (12-12, 6-6 Horizon) players, including four starters, closed Thursday night in double figures, with Simon, Ray McCallum and Eli Holman tying for team-high honors with 14 points.  McCallum also dished out six assists, while Doug Anderson added 12 points and seven rebounds.  The Titans shot at a blistering 61.5% (16-of-26) clip in the first 20 minutes, but were limited to 34.5% (10-of-29) in the second stanza.

Valparaiso (16-8, 9-3 Horizon) will attempt to maintain its spot in the top two of the league standings on Saturday evening when the Crusaders look to avenge their loss earlier this season against Wright State.  Tipoff is slated for 7:05 p.m., and as always, all the action can be heard live on the Valpo Sports Radio Network and seen online on the Horizon League Network.  Links to both the audio and video webcasts, as well as live stats and the Valpo Gameday page, will be available at www.valpoathletics.com.