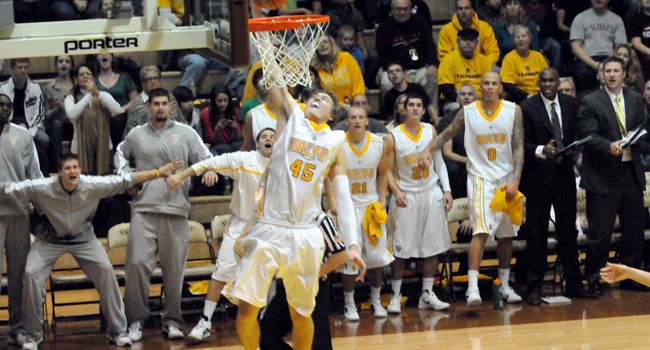 Playing on the road in a first-place showdown Thursday night in Cleveland, Ohio, Valparaiso surrendered the first point of the game to Cleveland State.  Valpo then scored 17 straight over the next eight minutes to seize control for good, and the lead never dropped into single digits the rest of the way, as the Crusaders came out of the Wolstein Center with a 59-41 victory and atop the Horizon League standings.

“Tonight didn’t have much to do with our coaches coaching, because the players out there for us did a tremendous job making plays, making shots, hitting the boards, and playing defense,” said Crusader head coach Bryce Drew.  “We all knew coming in how good a team Cleveland State is and how well they play defense, and I thought Ryan and Richie really were huge on the offensive end, making shots and forcing Cleveland State’s defense to extend.”

The damage was done early and often on Thursday by juniors Ryan Broekhoff (Frankston, Victoria, Australia/Australian Institute of Sport) and Richie Edwards (Lakeland, Fla./Lakeland [Hillsborough C.C.]).  Broekhoff got the Crusaders started by scoring on each of Valpo’s first four possessions, connecting on 3-point attempts on each of the first two trips.  After getting fouled and converting two free throws on the next possession, Broekhoff canned his third triple of the opening four minutes to give the Crusaders a quick 11-1 lead.

Then, it was Edwards who would kick off his third straight monster game.  He knocked down his first 3-point attempt with 14:48 to play in the first half to push the lead to 14-1, and then with the defense continuing to hold the Vikings scoreless, made it 17-1 Valpo at the 12:01 mark with another trifecta.  Trevon Harmon answered with CSU’s first field goal by knocking down a 3-pointer, but Edward responded with yet another triple to make it 20-4 Crusaders less than nine minutes into the game.

Valpo’s scoring pace slowed down from there, but the Crusaders still extended their advantage, as Broekhoff’s fourth 3-pointer of the half pushed the lead to 19 points with nine minutes to play in the half and a driving leaner by Edwards with 4:33 to play in the opening period made it 28-8 Valpo.  The Vikings ended the half on a 9-1 run over the last four minutes to cut the halftime lead to 29-17 after an opening 20 minutes which saw Broekhoff and Edwards combine for 26 of Valpo’s 29 points.

The Crusaders erased any notions the Vikings would have of rolling the momentum over into the second half right away, however.  The first offensive trip of the second half saw Broekhoff nail his fifth triple of the game, and then following a Vikings basket, redshirt junior Will Bogan (Boise, Idaho/Vallivue [Ole Miss]) got into the act from downtown with the Crusaders’ ninth 3-pointer of the game.  Yet another 3-pointer from Broekhoff made it 41-21 Valpo with 13:52 remaining.

The Crusaders’ largest lead came just under two minutes later, when Edwards connected from deep again to push the advantage to 44-23.  Cleveland State went on an 11-3 run over the next five minutes to move within 13 points once again and had the basketball, but the Valpo defense forced an air ball from behind the arc which Broekhoff grabbed and went coast-to-coast for the monster slam dunk to put an exclamation point on the victory.

Broekhoff paced all players on Thursday evening with his ninth double-double of the 2011-2012 campaign, posting 24 points on 6-of-9 shooting from behind the arc, his second time in the last three games hitting six triples, and also grabbing 10 rebounds.  Edwards added 20 points, his best performance against a Division I team this year, on 4-of-7 shooting from downtown while also pulling down six rebounds.

“Richie has worked extremely hard all year long on becoming a better player,” said Drew.  “Coming in from junior college, it takes a little time to get used to a new team’s offense and system, and I think now you’re seeing him really playing with confidence within our system.”

Cleveland State (20-5, 10-3 Horizon) was led by 15 points from Jeremy Montgomery, but he was the only Viking to score more than seven points on Thursday, as CSU was held to just 25.9% (14-of-54) shooting from the floor and 1-of-13 (7.9%) from behind the 3-point line.  Anton Grady tallied nine rebounds and five blocked shots in the losing effort.

“One thing our team has done a great job of doing is focusing on one game at a time,” said Drew.  “It’s a long conference season, and we’ve approached each upcoming game like it’s the most important one of the season, and that’s what we’ll do heading into Saturday.”

Valparaiso (18-8, 11-3 Horizon) puts first place on the line Saturday night at Youngstown State in a game which tips at 6 p.m. CST.  As always, all the action can be heard live on the Valpo Sports Radio Network and seen online on the Horizon League Network.  Links to both the audio and video webcasts, as well as live stats, will be available at www.valpoathletics.com.