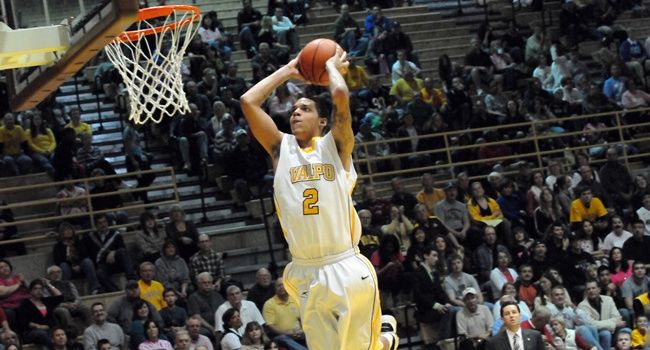 Valparaiso led by double figures for the last 30 minutes and shot better than 55% from the floor as the Crusaders opened exhibition play with a 90-62 victory Saturday night at the Athletics-Recreation Center over Saint Joseph’s (Ind.).

“I think you saw a team in Saint Joseph’s tonight which is going to have a really good year in their league,” said Crusader head coach Bryce Drew.  “I think our returning players got us out to a really good start.  It was a great game for our newcomers to get their feet wet, especially the guys who haven’t played a competitive game in a year or two.  We learned a lot from this game, got a lot out of it, and we’ll definitely take what we learned and apply it going forward.”

The Crusaders showcased their balance on Saturday night, as all nine players who dressed played between 17 and 28 minutes.  All nine grabbed at least two rebounds, while eight of the nine scored and eight tallied at least one assist as well.

Four Crusaders finished the night in double figures, led by 19 from junior Bobby Capobianco (Loveland, Ohio/Loveland [Indiana]) in his first game in a Valpo uniform.  Capobianco went 6-of-10 from the floor, including a three-pointer, and was a perfect 6-for-6 from the free throw line.  The junior grabbed eight rebounds as well.

Senior Ryan Broekhoff (Frankston, Victoria, Australia/Australian Institute of Sport) scored an efficient 16 points on 5-of-7 shooting, adding five free throws as well.  The duo of Capobianco and Broekhoff led the way as the Crusaders finished the night 18-of-19 (94.7%) from the charity stripe.  Senior Matt Kenney (Mooresville, Ind./Mooresville) hit three 3-pointers en route to a 15-point effort off the bench, while senior Ben Boggs (Roanoke, Va./Hidden Valley [Virginia Tech]) went 3-for-4 from downtown and scored 12 points.

Sophomore Vashil Fernandez (Kingston, Jamaica/Princeton Day [Md.] Academy) debuted with eight points, six of which came on dunks, and a game-high 10 rebounds.  Redshirt sophomore Alex Rossi (Winnetka, Ill./New Trier [California]) was the lone Crusader not to score, but handed out a team-best six assists without a turnover in 17 minutes off the bench, while fifth-year senior Erik Buggs (Memphis, Tenn./Mitchell) dished out five assists as well.

Valpo trailed just once, at 2-0 early, but scored nine of the next 11 points, capped by a 3-pointer from fifth-year senior Will Bogan (Boise, Idaho/Vallivue [Ole Miss]), to go ahead 9-4.  Later, a fast-break layup by Buggs pushed the lead to double figures for the first time at 16-6, less than five minutes into the game.  The lead got up to as many as 15 points in the first half, and the Crusaders closed the half with a 43-32 lead.

The Crusaders quickly put the game out of reach as the second half commenced, as Boggs sandwiched an inside bucket by Capobianco with a pair of 3-pointers as Valpo scored the first eight points of the second half.  The lead never fell under 16 points the rest of the way as the Crusaders closed out their first exhibition victorious.

Valpo ended the night 31-of-56 (55.4%) from the floor, including 10-of-25 (40%) from behind the 3-point line.  Valpo out-rebounded the Pumas 44-31 and out-scored them in the paint by a 38-20 margin.  Four of the nine Crusaders who played – Capobianco, Rossi, Fernandez and junior Jordan Coleman (North Hollywood, Calif./Calabasas [Southwestern Illinois College/Hawai’i]) [7 points, 4 rebounds]) – made their first appearance in a Valpo uniform on Saturday.  Saint Joseph’s (Ind.) was led by 11 points from Corey Clifton, while Damon Ellison Jr. added 10 points.

Valparaiso will play its second and final exhibition game next Saturday evening at 7:05 p.m. at the ARC against Robert Morris [Ill.].