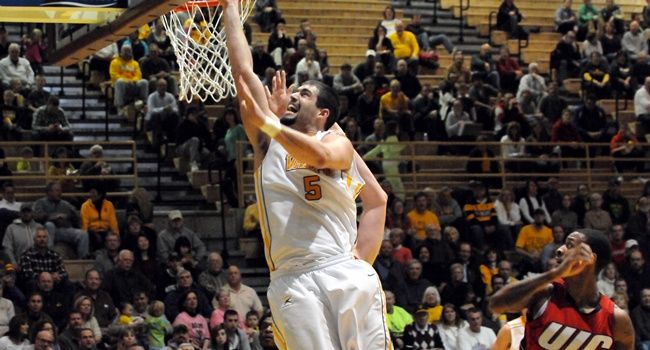 Valparaiso connected on a season-best 15 3-pointers in rolling to an 86-61 victory over UIC in Horizon League play on Tuesday evening at the ARC.  The victory improves the Crusaders to 8-2 in league action.

Valpo’s 15 3-pointers were the most by a Crusader squad since dropping 15 triples on Detroit in the Horizon League Championship quarterfinal in 2011.  The Crusaders also shot a season-best 57.7% (15-of-26) from behind the arc, hitting their 15 triples in the first 23 attempts.  It was the fifth time this year Valpo has hit at least half of its 3-point attempts, and the second time it has done so in back-to-back contests.

“We obviously shot the ball extremely well tonight,” said Crusader head coach Bryce Drew.  “I thought we moved the ball very well, and having 24 assists is fantastic.  I thought we rushed one shot early on, but other than that, we took great shots all night.  We did a very good job working our inside-out game, getting a lot of good looks out of that.”

Meanwhile, redshirt junior Bobby Capobianco (Loveland, Ohio/Loveland [Indiana]) nearly picked up the second triple-double in program history on Tuesday night.  Capobianco played a season-high 28 minutes, tallying 10 points, nine rebounds and nine assists, the latter of which topped his season total in the assist column to date.  Senior Matt Kenney (Mooresville, Ind./Mooresville) returned to action from injury and had a stellar night as well, going 3-of-3 from the floor for nine points, five rebounds and five assists without committing a turnover.

The long-range barrage started in the first half thanks in large part to the play of senior Ryan Broekhoff (Frankston, Victoria, Australia/Australian Institute of Sport), who drilled five of his seven 3-point attempts en route to 19 points by the break.  Broekhoff scored eight straight points during an early 15-0 run which gave the Crusaders the lead for good.

Trailing 7-2, fifth-year senior Will Bogan (Boise, Idaho/Vallivue [Ole Miss]) knocked down a fast-break 3-pointer off a feed from fellow fifth-year player Erik Buggs (Memphis, Tenn./Mitchell), and Buggs then converted a driving layup on Valpo’s next trip to tie the game at seven-all.  Broekhoff then scored his eight straight, sandwiching a mid-range jumper around a pair of 3-pointers, and Kenney hit Capobianco for a fast-break layup to cap the run and give the Crusaders a 17-7 lead with 13:28 to play in the first half.

The lead sat mostly in the high single digits for the rest of the opening period, as UIC was within nine at 30-21 as the clock ticked under four minutes.  But the Crusaders closed the half on a 14-6 run to take a 17-point lead into the locker room.  The run started following a steal by Kenney, who hit Broekhoff on the break for a layup, and then Kenney connected on an open 3-pointer on Valpo’s next trip.

Following an offensive rebound, the Crusaders ran a set inbounds play, springing Broekhoff for his third triple of the first half to make it 38-23 Valpo with 2:11 left before the break.  UIC scored on each of its final two possessions of the half, but each time Broekhoff answered with a 3-pointer, the last of which came from nearly 30 feet out as the game clock ticked down inside five seconds, giving Valpo a 44-27 lead at intermission.

The Crusaders blew the game open early in the second half, scoring on nine of their first 12 possessions, out-scoring UIC 23-10 over the first seven minutes of the half as the lead pushed out to 30 points.  Five different Valpo players knocked down 3-pointers during the opening stretch to help break the contest open.  The lead reached as many as 35 points with 4:55 to play before settling into the final margin.

Broekhoff closed the game with a game-high 22 points, ending the game 6-of-9 from 3-point range, and also added six rebounds.  Junior LaVonte Dority (Chicago, Ill./Foreman [USF]) scored 13 points off the bench, including three 3-pointers, while Buggs added 10 points as well to make it four players in double figures.  Valpo shot 60% (30-of-50) from the field for the game, assisting on 24 of its 30 made field goals.

Valparaiso (18-6, 8-2 Horizon) hits the road for its next two Horizon League games, starting with a Saturday afternoon matchup at Cleveland State.  The 3 p.m. CT tip can be seen live on ESPN2.  As always, the game can be heard live on the Valpo Sports Radio Network as well, with links for the live stats, audio and video available on ValpoAthletics.com.