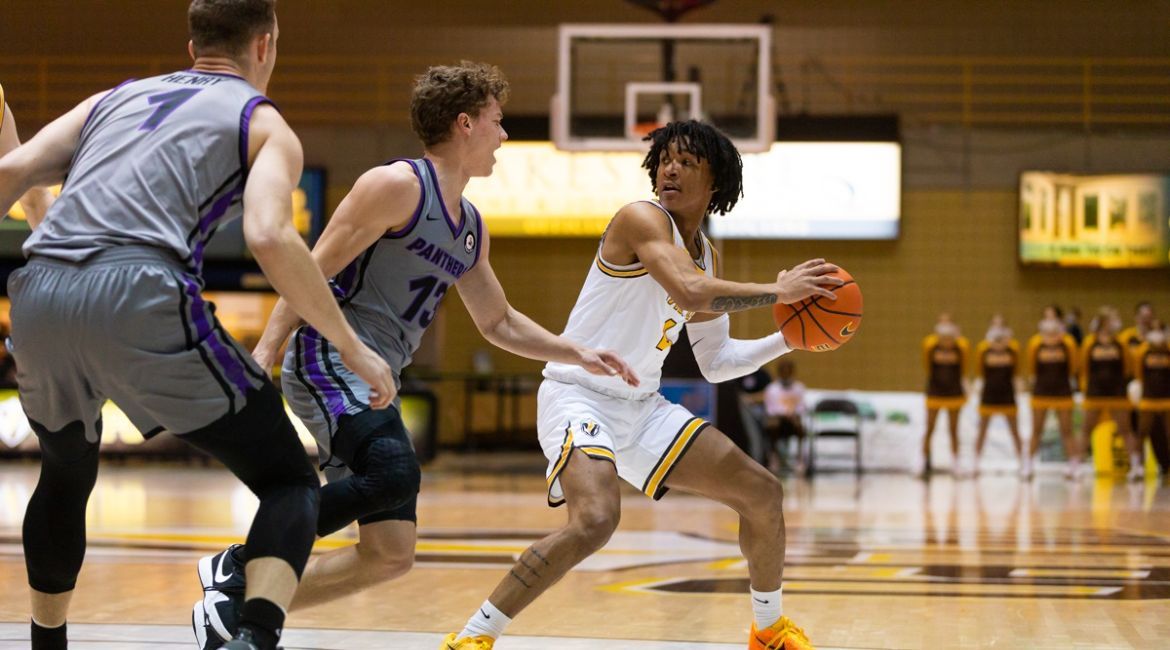 Next Up in Valpo Basketball: The Valparaiso University men’s basketball team will look to continue the momentum from Tuesday’s home victory as the squad hits the road for an instate showdown with Indiana State on Saturday afternoon. The Beacons have battled through a challenging start to conference play where five of their first seven league games came against teams projected to finish in the top four in the MVC standings. Now, the team hopes to build upon an overtime victory over a sound UNI team during a weekend trip to Terre Haute.

Last Time Out: Valpo trailed by as many as nine and led by as many as seven in regulation on a night where neither team would go away. Ultimately, overtime would be required as the Beacons fended off visiting UNI 83-80 behind a 22-point effort from Kevion Taylor. Thomas Kithier enjoyed a 15-point, 11-rebound double-double, while Trevor Anderson (16) and Kobe King (13) made it four players in double figures.

Head Coach Matt Lottich: Matt Lottich (92-88) is in his ninth season overall at Valparaiso University and sixth as the head coach of the men’s basketball program in 2021-2022. The 2020-2021 season saw Valpo improve its Arch Madness seeding for the fourth straight year as the program continued to make positive strides in each season as a Missouri Valley Conference member. The team earned a first-round bye in the State Farm MVC Tournament for the first time since joining the prestigious league. Valpo upset previously-undefeated Drake, the nation’s No. 25 team, 74-57 on Feb. 7, 2021 at the ARC, the fourth win over an AP Top 25 team in program history and second under Lottich. The Bulldogs were one of three undefeated teams in the nation prior to that setback, joining Gonzaga and Baylor. Just two years removed from finishing in last place and being knocked out in the first round of the Missouri Valley Conference Tournament as a first-year Valley member, Lottich’s team did more than hold its own in 2019-2020, ascending into a tie for sixth in the league standings before finishing as the conference tournament runner-up. Valpo became the first team in the history of Arch Madness to reach the title game after playing in the opening round. Lottich, hired as the 22nd head coach of the Valpo men’s basketball program in April 2016, graduated from Stanford University in 2004 and New Trier High School (Illinois) in 2000.

Series Notes: Valpo holds a 35-55 record in an all-times series that goes back to 1936-37. Most recently, the two teams split a pair of matchups at the ARC to round out the 2020-2021 regular season with Indiana State winning 58-43 on Feb. 26 before Valpo flipped the script for a double-digit victory of its own at 70-58 the next day. Since Valpo joined the Missouri Valley Conference prior to 2017-2018, the Beacons are 4-5 in nine matchups with the Sycamores.

To Regulation & Beyond: Since the calendar year flipped to 2022, half of Valpo’s six games have gone beyond the regulation 40 minutes. The 83-80 victory over UNI on Jan. 19 improved the team to 2-1 in overtime in MVC play and 2-2 overall in OT this season. Valpo also topped Illinois State 81-76 in OT on Jan. 2 and lost 81-74 at Loyola in double overtime on Jan. 11. This is the second time in the last three seasons that Valpo has had four overtime games. Three OT affairs in regular season conference play is already the team’s most since 2010-2011 and there are still 11 league games remaining. The Beacons have 10 losses this season, but five of them have come by four points or fewer, or in overtime, or both.

Reversal of Fortunes: Just two weeks after a 92-65 loss in Cedar Falls, Valpo reversed the result in an 83-80 overtime victory over UNI on Jan. 19. The last time Valpo beat a team that it had lost to by 27 or more earlier in the season was 1953-1954, when head coach Kenneth Suesens’ team beat Western Michigan 63-62 after having loss to WMU 103-70 earlier that year.