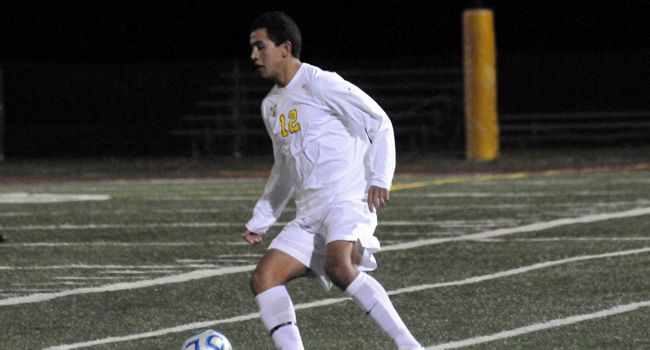 Returning home to Brown Field for the first time since the season opener, Valparaiso earned its second straight 1-0 victory Friday night, defeating IUPUI thanks to a strike in the 63rd minute from freshman Eric Nieto (Louisville, Ky./Louisville Collegiate).

“As a team, we played with heavy hearts tonight, because one of our players [Kevin Brown] lost his father this morning,” said Crusader head coach Mike Avery.  “We're a really tight-knit group, and when one of our guys is struggling, we all feel it pretty strongly.  News like that makes us all step back, prioritize certain things and reevaluate what's really important.  Our thoughts and prayers go out to Kevin and his family.”

The decisive goal came as the second half approached the halfway point.  With the Crusaders taking a throw-in deep in the IUPUI half, junior Kevin Miller (Jefferson City, Mo./Helias) won the battle and possessed the ball inside the box.  Miller knocked the ball back towards the midfield, where Nieto corralled it and let loose a strike from 30 yards out that stayed along the ground and hit the back of the net, just inside the left-hand post.  For Nieto, it marked his first collegiate goal, while Miller now leads the Crusaders with three assists on the season.

While that would be the Crusaders’ only goal, they had a number of other opportunities, ending the night with 12 shot attempts.  Six of Valpo’s attempts were on goal, as seniors Guy Shabtay (Ramat-Gan, Israel/Blich [Prairie State C.C.]) and Brendan Roth (Elkhart, Ind./Memorial) each put a pair on frame in addition to two from Nieto.  IUPUI (1-5-1) goalkeeper Tyler Keever made five saves to hold the Crusaders to just the one marker.

Meanwhile, IUPUI’s best chances at a potential goal came early and late.  In the seventh minute, Matt Guy ran down a long lead pass parallel to a Crusader defender and ran in on goal, but Kyle Zobeck (Coralville, Iowa/Iowa City West) came out nicely to cut down the angle and eventually turned away Guy’s shot attempt.

Then, with time winding down, the Jaguars pushed forward looking for the equalizer.  With plenty of bodies in the box, a cross was headed by Ryan Robinson, aimed inside the right-hand post.  But junior Jonathon Smith (McKinney, Texas/McKinney) was there to clear the ball off the line and maintain the Crusaders’ clean sheet.  Zobeck ended up making three saves in his second straight shutout.

Valparaiso (3-2-1) hits the road Sunday for a 1 p.m. CDT match at Western Michigan.  Live stats for the Crusaders’ showdown with the Broncos will be available at www.valpoathletics.com.