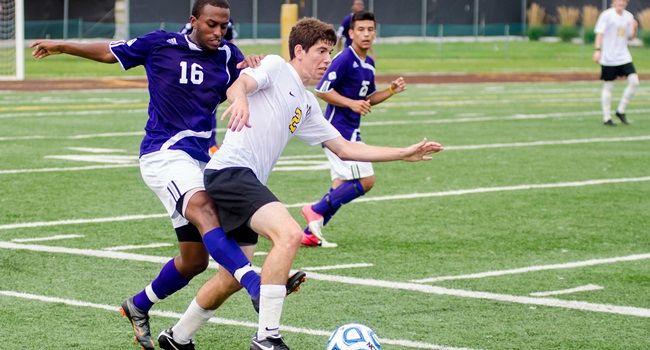 Junior Todd Vervynckt (Plymouth, Ind./Plymouth) scored a goal off a corner kick in the 29th minute as Valparaiso led #9 UC Santa Barbara at halftime Friday evening in Santa Barbara, Calif., but the Gauchos scored a pair of second-half goals to down the Crusaders, 2-1.

"Obviously, this is probably one of the toughest environments to play in in college soccer," said Crusader head coach Mike Avery. "Santa Barbara has an amazing thing going with their crowd and their stadium, as well as their team. I'm really proud of the way we came in and stood up to them - we talked about being focused and not letting ourselves get pushed around, and I thought we did a good job standing up to them."

The Crusaders and Gauchos battled in an even first half, save for Valpo putting the game's first tally on the board. Junior Charles Barden (Cedar Rapids, Iowa/Linn-Mar) lined up a corner kick in the 29th minute and sent it into the box. There, junior Yannick Iwunze (Paris, France/Hightower [Tex.] H.S. [Barton County C.C./West Virginia]) deflected it on to Vervynckt, whose right-footed shot found the lower-left corner of the net to give the Crusaders a 1-0 lead. The goal was the second of the season for Barden, while Iwunze picked up his first point in a Valpo kit with the assist.

Valpo maintained the 1-0 lead through halftime, but UCSB scored twice in the second half for the come-from-behind win. The Gauchos found the equalizer in the 54th minute, as Achille Campion crossed on the ground to Nic Ryan, whose shot found its way underneath the crossbar to make it 1-1. The duo then reversed roles for the eventual match-winner in the 68th minute, as Ryan played a ball over the top to Campion, who beat Crusader goalkeeper Kyle Zobeck (Coralville, Iowa/Iowa City West) for the Gauchos' second goal.

"I thought we played as well as I've seen us play in the first 45 minutes tonight," said Avery. "Santa Barbara turned up the pressure on us in the second half, and the game got a bit more wide open. But all in all, it was a really good performance by our guys, and I'm really proud of them."

UC Santa Barbara ended the night out-shooting Valpo, 12-6, but the Crusaders were just narrowly out-shot on goal, as Valpo put four shots on frame to the Gauchos' six. Zobeck made four stops in the losing effort for the Crusaders.

Valparaiso (1-2-1) closes out its California swing on Sunday afternoon as the Crusaders take on Cal Poly at 4 p.m. CDT. Live stats can be found for the match through www.valpoathletics.com.