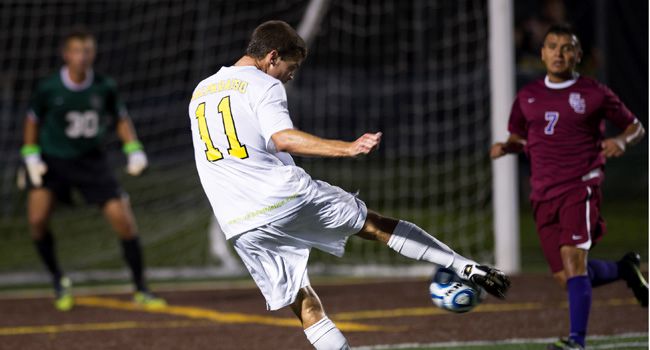 The tough-luck stretch for the Valparaiso men's soccer team continued on Wednesday evening, as despite 20 shot attempts, including eight which were on goal, the Crusaders fell 1-0 at IUPUI in Indianapolis, Ind.

"It was obviously another tough game for us in a stretch that has been incredibly challenging,” said Crusader head coach Mike Avery. “We're not quite sure how to put our finger on what's happening, but we do know we're going to keep fighting. The effort has been excellent from our guys, and our energy and leadership have been good throughout this stretch.”

Despite a 20-13 advantage in shot attempts, including an 8-3 edge in shots on frame, the lone goal went to the Jaguars in the 10th minute, as Kyle Hyland connected on an effort from 25 yards out. The Crusaders controlled the majority of the game, hitting a post in the 59th minute and winning eight corner kicks while not surrendering any to IUPUI, but could not find the equalizer in dropping their fifth straight one-goal decision. Making his first career start, redshirt sophomore Tom Serratore (Tinley Park, Ill./Andrew) made two saves, while IUPUI goalkeeper Eduardo Cortes stopped eight shots.

“IUPUI had a nice goal early on,” said Avery. “We pushed the tempo the rest of the game and created a number of chances, hitting a post while a couple of other easy chances we weren't able to convert. When you chase the game, sometimes that's what happens. We're going to get back to business tomorrow and train – one thing I know about our team is we're going to keep fighting.”

Valparaiso (1-5-1) opens the Horizon League slate at Brown Field on Saturday evening at 7 p.m. against Loyola. The first 100 fans through the gates will receive a free Valpo scarf. If you can't make it to the game, live stats will be available through www.valpoathletics.com.

“We're excited for Saturday as we go into the league season,” said Avery. “We start fresh with a 0-0-0 record, and get to open against Loyola, who we certainly have history with from last year. We're excited for the opportunity to move ahead into the next part of the season and put the early season behind us.”