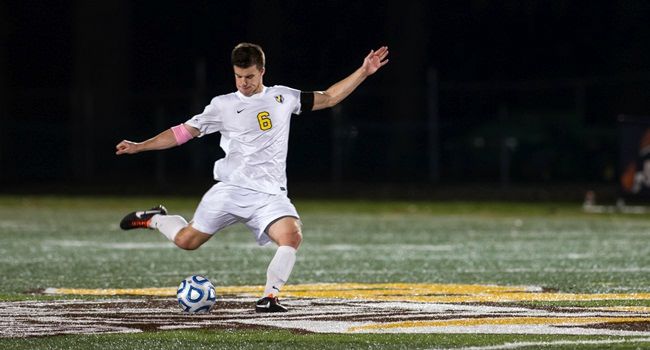 Senior Jaymie Bullard (Naperville, Ill./Neuqua Valley) headed home a cross from close range just 22 seconds before halftime Tuesday evening, the only goal #4 Valparaiso would need as it downed #5 Milwaukee 1-0 in a Horizon League Championship quarterfinal at Brown Field.  The win advances the Crusaders to the semifinals, where they will take on #2 Cleveland State in Detroit on Friday morning at 10 a.m. CST.

“This time of the year is all about results, and so we are thrilled with the win and with the fact that we get to move on to the next round of the tournament,” said Crusader head coach Mike Avery.  “Our goal from day one has been to reach the NCAA tournament, and now we are one step closer.  I have to also say that I was very pleased with our performance tonight.  We played with tremendous energy, great focus and concentration, and put in a really determined performance.  It was a tight game and Milwaukee is a good team with talented players and a first class coaching staff, but I felt we got what we deserved and earned the result tonight.”

The first half saw very few good chances for either side.  Valpo had a pair of shots on goal from distance in the first half hour that were both saved by UWM goalkeeper John Shakon.  The Panthers' Robbie Boyd had the ball in the box in the 22nd minute, but was double-teamed and could just dribble a soft shot in between the Crusader defenders, an effort easily stopped by Valpo netminder Kyle Zobeck (Coralville, Iowa/Iowa City West).

While it looked like the game would go into halftime scoreless, the Crusaders made sure that would not happen with their goal in the 45th minute.  Junior Todd Vervynckt (Plymouth, Ind./Plymouth) won a battle for the ball in Valpo's offensive third and dribbled up along the right-hand side of the box before sending in a cross.  The battle had left the Panther back line in disarray, and Vervynckt's cross came in with three Crusaders on the edge of the six, none of whom were marked by Milwaukee defenders.  In the center of the trio was Bullard, who took the header well, easily beating Shakon by placing it inside the right-hand post for the decisive tally.

Holding the advantage, the Crusaders controlled play for the most part in the second half, allowing Milwaukee just four shots, two of which were blocked by Valpo defenders and none of which were on goal.  The Crusaders could not find an insurance goal among their eight shots, but wouldn't need it, as the Panthers' final effort in the 89th minute from Robbie Boyd was well wide left as Valpo closed out the clean sheet.

The Crusaders out-shot Milwaukee (8-8-2) on the evening 14-12 and placed five shots on goal to the Panthers' two.  Zobeck made a pair of saves for the shutout, his fifth of the season and 23rd of his career.  Shakon made four saves in the losing effort for the Panthers.

“I also think it was fitting that our seniors led the way for us in the last home game of their careers,” said Avery.  “Jaymie was outstanding in the middle of the back and scored a great goal, Jon Smith was an absolute workhorse in the midfield, while Kevin Miller and Jordan Lewis locked their sides of the field down.  For Kyle to earn yet another shutout is also the right ending to his unbelievable home career.  We'll be leaning on these guys again on Friday as we face a very good Cleveland State team.”

Valparaiso (6-8-5) heads to Detroit this weekend as one of four teams still in contention for the 2012 Horizon League title.  The Crusaders face second-seeded Cleveland State on Friday morning at 10 a.m. CST, with a live broadcast on the Horizon League Network.  The link for the HLN live video, as well as live stats, will be available through www.valpoathletics.com.  Valpo and Cleveland State played to a scoreless draw in their earlier meeting this year.