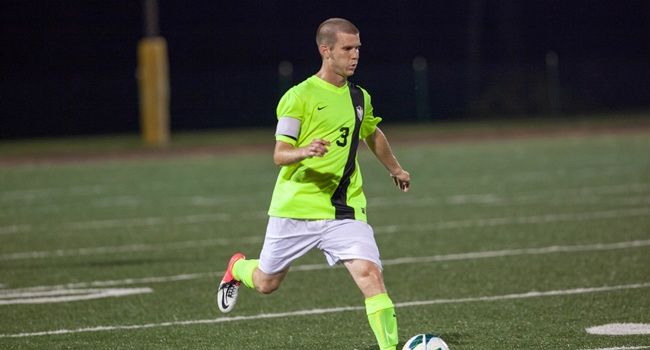 For the third time in as many games, extra time would be needed to decide the result of a Crusader men’s soccer match.  In this edition, the Crusaders traveled to Rochester, Mich. to take on the Oakland Grizzlies; the newest member of the Horizon League.  Typical of Horizon League games, this was a highly competitive, physical, and skillful contest.  The game ended in a hard fought 1-1 draw, with Charles Barden (Cedar Rapids, Iowa/Linn-Mar) scoring the lone Crusader goal.

“First off, we just want to welcome Oakland to the league,” said head coach Mike Avery.  “We knew they were going to be a good addition and after having played there now, our thoughts were only confirmed.  They have a beautiful field and a good environment, and of course they are a really good team.  They are a great addition to the Horizon League and we welcome them.”

In a scoreless first half, the Crusaders defended well to keep the Grizzlies from creating any sort of quality chance.  Oakland was able to take 6 shots in the first half, but Valpo goalkeeper Tom Serratore (Tinley Park, Ill./Andrew) was only called upon to make 1 save.  The Crusader backline kept the Grizzlies from playing into dangerous areas, they kept the ball in front of them and forced Oakland into long range efforts.

“I thought it was a good performance by us tonight - it was very professional and determined,” said Avery.  “We knew that with this being the first Horizon League game in any sport for Oakland’s history, we were going to have to deal with a lot of energy and a wave of emotion; especially at the start of the game.  So we knew we were going to have to sit in a little bit and absorb some pressure and really just work at keeping them out of the penalty box.  In that regard, I thought we were fantastic in the first half.”

Coming out of the first half with a 0-0 score line, the Crusader men settled into the second half nicely.  As the game progressed, Valpo found its rhythm and started to build and create quality chances through solid possession.  In the 59th minute, senior midfielder Charles Barden made a dangerous run with the ball to the Grizzly end line.  Beating the Oakland defender, Barden was able to serve a low driven ball across the face of goal that was deflected into the goal.  Barden’s first goal of the season put the Crusaders up 1-0.

“In the second half we started to play a little bit and really grew into the game – we started connecting pass and creating chances,” said Avery.  “Charles made a great run that took him to the end line where he was able to hit a dangerous ball right across that ended up getting deflected into the goal.  But that sort of thing tends to happen when you are able create those types of chances.”

The Crusaders, however, were unable to hold onto their goal advantage, as Oakland’s Matt Rickard was able to equalize in the 81st minute.  Rickard’s goal, a header, came from a ball that was served into the area off of a set piece.

“We do feel a little bit unlucky not to have held on at the end but you have to give a lot of credit to Oakland - it was a terrific serve and the guy got on the end of it for a really well taken goal,” said Avery.  “So we really don’t have much to say about that other than congratulations to them on a good goal.”

With the score level at 1-1, the game was sent into overtime.  Neither team was able to connect many passes or create chances.  The best chance for either side came with just under 2 minutes left in the last overtime period.  The Crusader’s Eric Nieto (Fort Lauderdale, Fla./Louisville Collegiate [Ky.] was able to beat his defender near the end line and serve a ball into Nick Suker (Downers Grove, Ill./South) who made his run to the near post.  Suker made good contact on the ball, but Oakland’s goalkeeper was able to produce a save that kept the score level at 1-1.

The Crusaders (0-0-3, 0-0-1 Horizon) have another quick turnaround as the team is back in action on Sunday to take on #RV/24 Michigan State (2-0-0), in the last game of the Grizzly/Spartan Crossover Tournament .  The match will have live video for a fee through Michigan State’s website.  Follow @VUMSO on Twitter for live in-game updates.