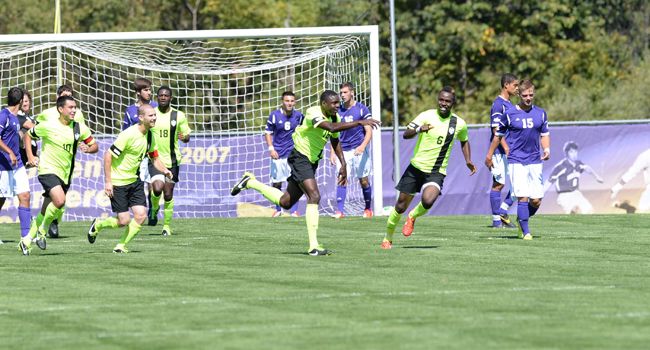 Playing their sixth game on the road this season, the Valparaiso men traveled to Western Illinois for a Sunday afternoon matchup.  After a quick turnaround from a tough result on Friday night, the Crusaders were able to score two goals in the early stage of the game in what would end as a 5-2 victory over the Leathernecks.

The Crusaders wasted no time at all putting their stamp on the game.  Early in the 9th minute, Adrian Graham (Kingston, Jamaica/St. George’s College) scored his first goal as a Crusader to put Valpo up 1-0.  The Jamaican center back showed great skill as he was able to find goal from 15 yards out off of a Valpo corner.  Credited with the assist were Zev Taublieb (Malibu, Calif./Agoura) and Yannick Iwunze (Paris, France/Hightower [Tex.] H.S.).  Later in the 9th minute, Nick Suker (Downers Grove, Ill./South) found himself with just the opposing goalkeeper to beat as the Crusaders were able to turn the Leathernecks over in their own defensive third.  Suker would beat the goalkeeper and score his third goal of the season, putting the Crusaders up 2-0 in less than 10 minutes of the match.

"We challenged the guys this morning to deliver an appropriate response to a difficult game Friday night, and I think two goals in nine minutes was a great response,” said head coach Mike Avery.

Western Illinois was able to cut the lead in half early in the second half on a goal from Husref Jupic.  However, Valpo would respond in the 61st minute as Taublieb was able to play Charles Barden (Cedar Rapids, Iowa/Linn-Mar), whose well-timed run put him in on goal.  Barden would finish the chance and put the Crusaders up 3-1.  The Leathernecks would again cut the lead to just one with a goal in the 68th minute, but the day belonged to the Crusaders.

A good spell of possession from the Crusaders led to Suker finding himself with enough space to hit a shot on goal.  Suker’s chance would be blocked by the goalkeeper, but the rebound would fall to Barden who buried the ball into the back of the net to score his second of the game and third of the season to put the Crusaders up 4-2.

"Over the course of the game we were a little ragged, but with the quick turnaround and travel, I think that is somewhat expected,” said Avery.  “Our mistakes gave them some life, but we answered again to close out the game. In all, I'm very proud of the team. They showed great character today."

The Crusaders would add another goal in the 87th minute to put the game well out of reach at 5-2.  Quality possession from the Crusaders would again lead to a goal as Jordan Aidoud (Lyon, France/CEFAM) scored his first goal of the season off of a great combination play with Barden inside the Leatherneck penalty area.

"To be 3-1-3 at this point, with six of those seven games on the road, is a great accomplishment,” said Avery. “As we turn toward league play, we have some confidence, but we also know that every game in the Horizon League is a battle. Saturday at Wright State will be a difficult game but we are very excited for the next phase of the season."

Valparaiso (3-1-3, 0-0-1 Horizon) will travel to Dayton, Ohio next for Saturday and Monday night fixtures.  Saturday night, the Crusaders play their second league game of the season at Wright State (1-3-1, 0-0-0 Horizon).  Valpo will then stay in Dayton, as the team will take on the University of Dayton (7-0-0) for a Monday night match.  Live stats for both games will be available through ValpoAthletics.com.