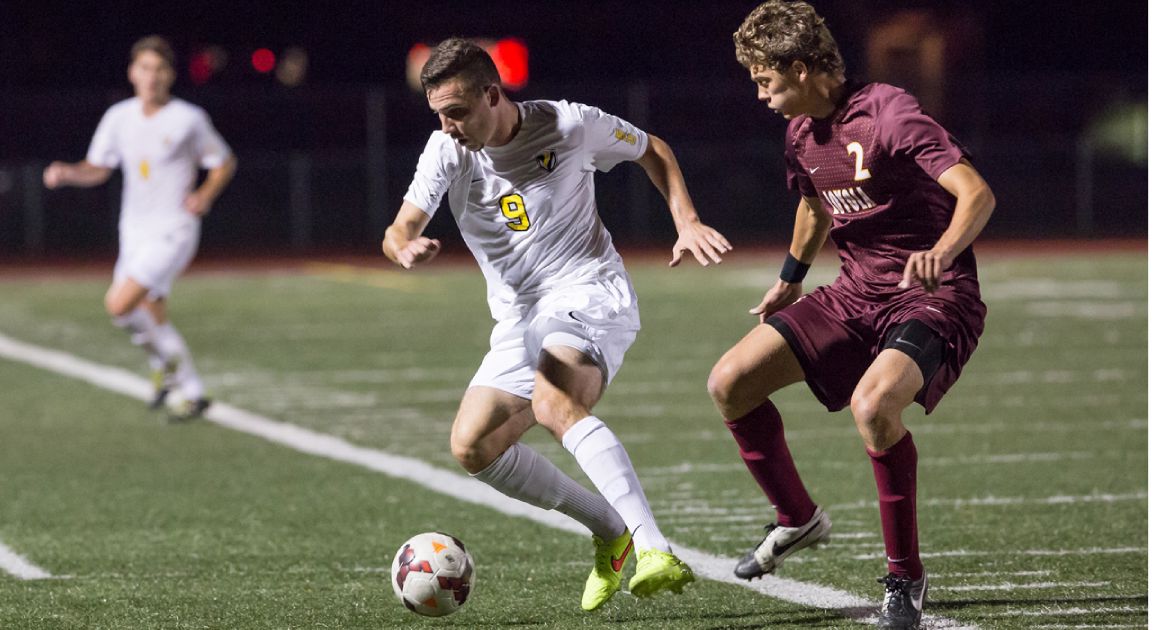 Jordan Aidoud controls the ball and battles with a defender
Valparaiso at IUPUI | October 07, 2014

The Valparaiso men’s soccer team got back to its winning ways in an attacking way as it won at IUPUI Tuesday night, 3-1. The three goals are a season high for the Crusaders.

“It was a very good result tonight, on the road to an in-state rival,” Crusader head coach Mike Avery said. “IUPUI is always a difficult game for us and I thought we handled the match very well. Our possession was sharp, we had long spells of good rhythm in our attack, and minus one hiccup, we defended well and with good shape.”

The Crusaders got on the scoreboard early as junior midfielder Jordan Aidoud (Lyon, France/ CEFAM) was tackled in the box by a Jaguar defender and awarded a penalty kick 15 minutes into the game. On an overcast and drizzling night, Aidoud calmly stepped up to take the kick and buried it in the top right-hand corner.

Just under four minutes later, sophomore Matthew Gweh (Apple Valley, Minn./Eastview), in his first game back from an injury, knocked home a shot from ten yards out off a feed from senior Zev Taublieb (Malibu, Calif./Agoura) after Gweh had beaten a Jaguar offsides trap. Taublieb led the Crusaders with two assists, while Gweh found the back of the net in the regular season for the first time in a Valpo uniform.

“It was nice to see Matt get on the field and find the goal,” Avery said.  “He is a very talented attacking option for us who has been out all season with injury. Having him back in the stretch run is very important to our potential.”

IUPUI got on the board in the 74th minute after Jacob Singer sent one to sophomore goalkeeper Nico Campbell (Kingston, Jamaica/St. George’s College) right. The threat was short-lived however, as freshman forward Stian Sandbekkhaug (Ottawa, Ontario, Canada) took a breakaway pass by Taublieb just three minutes later and beat the goalkeeper for the easy goal for the first of his Crusader career.

“Stian also got his first career goal tonight as he put in a good shift,” Avery said. “It is the first of what I am sure will be many goals over the course of his career.”

The Crusaders pounded the Jaguars' defense all night, tallying eight on goal and 18 in total. Sandbekkhaug and Aidoud each registered two shots on goal to lead Valpo.

Their defense was just as impressive, limiting the Jaguars to just four shots and only one shot on goal. Campbell improved his record to 5-2-3.

“We have a massive game next when we host Wright State on Friday night,” Avery said. “We hope that Crusader Nation shows up to support us because it is going to be a real battle against a talented WSU team.”

Valpo (6-2-3, 1-1-0) returns to the pitch Friday night as they welcome the Raiders of Wright State to Brown Field for the opening act of Homecoming Weekend. Kickoff is set for 7 p.m. CT. Live stats will be available through ValpoAthletics.com and the match will be broadcast live via the Horizon League Network on HorizonLeague.com.