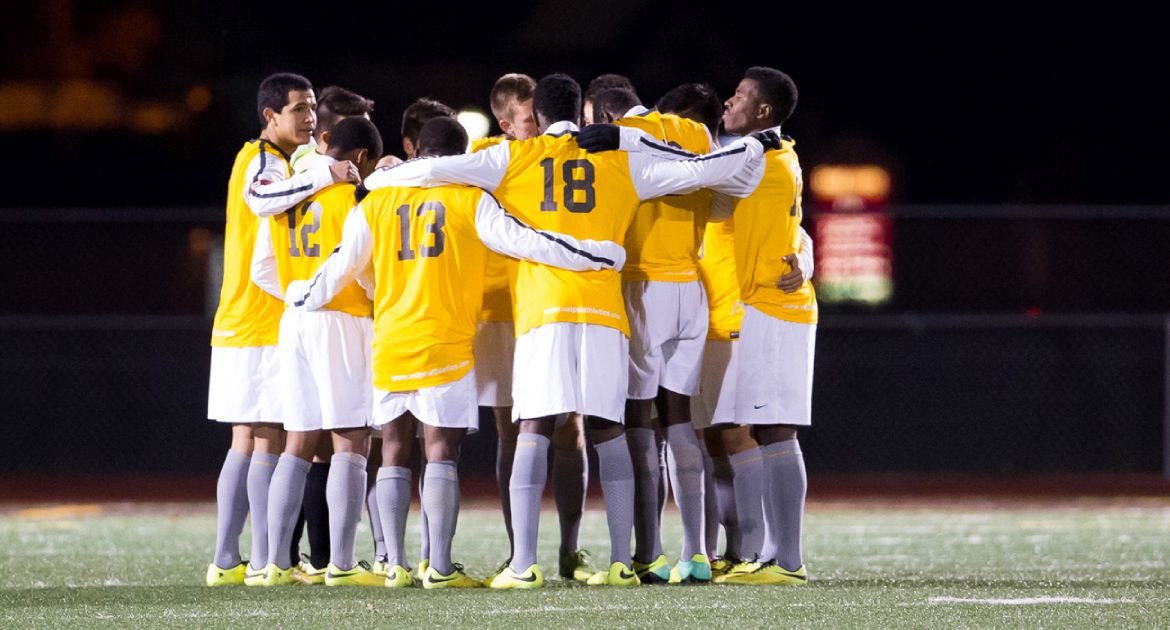 Men's soccer hosts Oakland in their regular season finale at 7:30 on Friday at Brown Field.
OAKLAND at Valparaiso | November 07, 2014

This Week in Crusader Soccer: The Valparaiso men’s soccer team takes on second-place Oakland in their last match of the regular season on Friday night at Brown Field.

Previously on the Pitch: Valpo went 0-2 last week, losing to IPFW at home last Wednesday, 1-0, before dropping a heartbreaker to Green Bay on the road in overtime last Saturday, 2-1.

Following the Crusaders: Friday’s match will have live stats available through ValpoAthletics.com, as well as a live audio broadcast on WVUR (95.1 FM, Valparaiso) and online. Over the course of the 2014 season, four matches will have free live video on the Horizon League Network, and WVUR, Valpo’s student radio station, will also be broadcasting select matches.

Series Notes: Oakland – This will be the 13th time the Crusaders and Golden Grizzles will meet on the pitch in a series that first took place in 1998. Oakland ended Valpo’s season last year in the Horizon League quarterfinals in Rochester, Mich., winning 2-1. Nick Suker scored the lone goal for the Crusaders, while Tom Serratore made three saves. In the regular season, the Brown and Gold fought to a 1-1 double overtime draw in Rochester as well.

Scouting the Opposition: Oakland – The Golden Grizzles come to Brown Field with a 7-6-2 record and sit in second place in the Horizon League with a 5-0-2 mark. Matt Dudley leads the team with nine points and three goals in 15 games, while Wes Mink has only given up 12 goals all year en route to posting a .87 goals against average and 7-4-2 record, while recording six shutouts.

Scouting Ahead: The 2014 Horizon League Men’s Soccer Championships begins on Monday, Nov. 10. As it stands right now, Valpo enters as the fifth seed and would travel to fourth seed Cleveland State. If they would win, they would advance to the semi-finals and face either Oakland or Detroit.

Raising Awareness: Valpo will be using Friday night’s home match as its annual benefit game for They Often Cry Outreach (TOCO). Last year, the Crusaders raised over $3,000 at the match and used the donations to help send 150 new bicycles and helmets for the annual TOCO Toy Drive which benefits underprivileged children in St. Lucia and provided them with Christmas gifts they might not have otherwise received. In addition to preparing for the 2014 TOCO Toy Drive, funds raised this year will also go to help in TOCO's new venture, the TOCO Permaculture Program, and in specific the establishment of a sustainable school garden where many of the nutritional needs of the school's elementary children will be grown right on the school's campus. Donations will be collected at the gate. In addition, TOCO items and #oneVALPO shirts will be on sale with all proceeds going to TOCO.

Top of the League: The Crusaders find themselves at the top of Horizon League in goals allowed (15) and goals against average (.81). They are also third in goals with 21.

Senior Spotlight: Throughout the season, the team will honor a senior player at selected home games. This week they will celebrate captain and midfielder Zev Taublieb and defenseman Zane Wold, in their final regular season game against Oakland. Last week they recognized senior midfielder Nick Suker and defenseman Jacob Unger.

Protecting the Net: Through 17 games this season, the Brown and Gold have only allowed 15 goals while playing stifling defense. They are 35th in the nation in team goals against average with a .81.

Non-Conference Schedule Paying Off: The Crusaders faced a challenging non-league schedule this year, and are now seeing the fruits of their labor through league play. They took to the road against several big time opponents, including then #7 Michigan State, Northwestern and Davidson. The Spartans’ only losses have been to the Crusaders, Ohio State, Oakland and Michigan. They are ranked 21st in the NSCAA/ Continental Tire NCAA Division I Men’s National Poll. Northwestern is 8-3-5, third in the Big Ten and ranked 16th in the NSCAA poll. Davidson upset #2 Virginia on Sept. 24.

Sparks Off the Bench: Freshman forwards Jordan James and Stian Sandbekkhaug have made the most of his opportunities coming off the bench. They are both tied for second on the team in goals with three. Two of James’ goals have been match-winners, against Butler and in the home opener against Western Illinois.