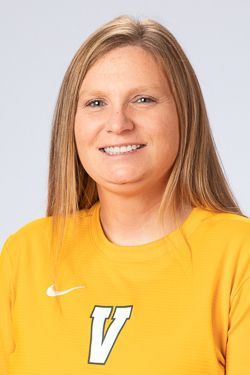 Valparaiso University director of athletics Mark LaBarbera announced on July 23, 2014 that Kate Stake has been hired as the head coach of the Valpo softball program. Stake, who enters her seventh season at the helm of the Crusaders in 2021 with a 114-157 record, led Valpo to the Horizon League Championship and a berth in the NCAA Tournament in her second year in 2016.

Stake led the Crusaders to nine victories in the truncated 2020 campaign, including a pair of wins over Fordham, which entered the year seven-time defending Atlantic 10 champions.

2019 saw Stake lead Valpo to 16 wins, including a victory at North Carolina State - just the third victory over an ACC program in Valpo softball history. Seniors Carly Trepanier and Jaymee Lawton closed out stellar careers in 2019 under Stake's guidance, finishing their time at Valpo ranked among the program's all-time best in a combined 12 statistical categories.

Stake led Valpo in its transition to the Missouri Valley Conference in 2018. Despite the move to the MVC, which concluded the 2018 season 12th in the nation in conference RPI - a 16-spot jump from the Horizon League the previous year - the Crusaders posted a 27-24 record and improved on their team RPI by 67 spots from the previous season. After being picked ninth in the preseason poll, Stake guided Valpo to a fourth-place regular season finish and a berth in the MVC Tournament semifinals. She coached the MVC Newcomer of the Year and a Second Team All-Conference honoree in Kelsie Packard as well.

In 2017, Stake guided the Crusaders to 28 victories and a third-place finish in the Horizon League standings. Under her tutelage, senior Sam Stewart was named the Horizon League Player of the Year and was a Second Team All-Region selection as she set new program single-season records for home runs, walks, slugging percentage and on-base percentage while leading the league in seven offensive categories.

Senior Jorgi Calombaris joined Stewart as a First Team All-League choice in 2017, while Trepanier was a Second Team All-League and Third Team All-Region selection as a sophomore. 2017 marked just the second season in program history in which multiple Crusaders received All-Region accolades.

Stake led Valpo as it put together one of the most dramatic runs imaginable to earn the Horizon League Championship in 2016. The Crusaders earned a berth in the league tournament with a win in the final weekend of the regular season, and then ran through the league tournament undefeated as the sixth seed, posting four straight wins to earn the title and the league's berth into the NCAA Tournament.

A pair of Crusaders earned All-League honors in Stake's second season, as both senior Taylor Weissenhofer and freshman Carly Trepanier earned Second Team accolades, while Trepanier was also an All-Freshman Team selection. After the Crusaders' run to the Horizon League title, junior Sam Stewart was selected as tournament MVP, sophomore Lanie Callaghan the tournament's Batting Champion and Weissenhofer the Pitcher of the Tournament, while Trepanier joined the aforementioned trio on the All-Tournament Team.

Stake led the Crusaders to one of the top offensive seasons in program history in her first year in 2015. Valpo hit .300 as a team and set a new team single-season record with a .381 on-base percentage, as the Crusaders scored nearly five runs per game. Valpo finished tied for fourth in the Horizon League standings in Stake's first season in charge, as she guided three All-League selections, including First Team All-League and Second Team NFCA All-Region choice Kaitlyn Ranieri.

Prior to arriving at Valparaiso, Stake spent two seasons on the coaching staff at Hofstra, working under NFCA Hall of Fame head coach Bill Edwards and helping the Pride to a combined 81 wins over her two years.  The 2014 squad went 35-14 and earned an at-large bid to the NCAA Tournament, finishing the season ranked #33 in RPI.  Eight members of the Pride were named NFCA All-Region honorees this past season as well.

In her first season, Stake was part of the NFCA Northeast Region Coaching Staff of the Year which led Hofstra to a 46-13 record as the Pride won regular season and conference tournament championships.  Hofstra ended the 2013 campaign ranked #19 in RPI and #25 nationally in the NFCA/USA Today poll, and advanced to the NCAA regional title game.  In both of Stake’s seasons with the Pride, Hofstra hit better than .300 and had six regulars hit above the .300 mark.

Prior to her time at Hofstra, Stake spent three seasons as an assistant coach at the United States Military Academy, working primarily with the infielders and serving as the hitting coach.  During her time at Army, the program set new single-season records for wins, conference wins, hits and total bases, while in Stake’s final season with the Black Knights, four players made the school's single-season top-10s in hits and RBIs and two players moved into the single-season top-10 in batting average.

Defensively, Stake helped the Black Knights post the Patriot League's top fielding percentage in 2011, while Army ranked second in the category in 2010 and 2012 as well.  Over her three seasons, five infielders earned All-Conference accolades, including three First Team selections under her tutelage.

Before arriving at West Point, Stake served two years as a full-time assistant coach for Eastern Illinois after one season as a graduate assistant in 2007.  As the primary defensive instructor and first-base coach, Stake also aided in recruiting, concentrating on the Midwest region. Off the field, she monitored the team's academic progress and helped coordinate fundraising efforts while also organizing the team's travel arrangements.

The Buffalo Grove, Ill. native earned Second Team All-American honors in 2005 and was a four-time All-Conference selection – including First Team accolades each of her final two years.  She was the recipient of the Linda Herman Female Scholar-Athlete of the Year at Illinois State, the school’s highest academic award given to a student-athlete, and was an Academic All-American as well.  In the classroom, Stake earned a bachelor's degree in English education from Illinois State and a master's degree in kinesiology and sports studies from Eastern Illinois.