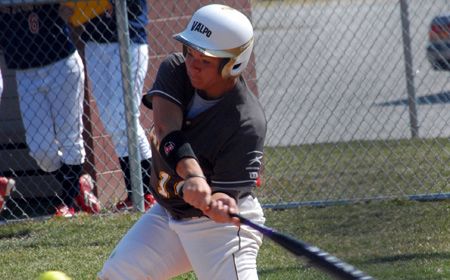 Setting the Scene: Valparaiso closes out the regular season with a flurry of home games this week, as the Crusaders will host seven contests over four dates.  Non-league midweek twinbills against IPFW and nationally-ranked DePaul precede a three-game weekend series against league foe Cleveland State.

Series Histories: IPFW - Valpo holds a 19-11 advantage in the all-time series against the Mastodons, including a sweep last year in Fort Wayne on April 9.  The Crusaders placed their first 11 runners on base en route to a 12-3 victory in the opener, and earned a come-from-behind 8-4 win in the nightcap.  Mallory Gill led the way at the plate, going 5-for-7 with eight RBIs on the day.
DePaul - The Crusaders have never been able to defeat the Blue Demons, as DePaul leads the series 43-0-1.  Last year on April 3 in Chicago, Valpo scored first in both games of the doubleheader, but DePaul rallied for victories, winning the opener 6-2 and the nightcap 8-2.  Karen Korb and Tracy Korth each reached base twice on the day.
Cleveland State - The Vikings lead the all-time series 8-5, but the two squads split a pair of pitchers’ duels last year in Cleveland on May 4, as the Crusaders won the opener 1-0 in eight innings behind a two-hitter from Andrea Zappia.  CSU responded with a 4-1 victory in the nightcap on a four-hitter by Amanda Macenko.

Previously in Valpo Softball: The Crusaders dropped two out of three games in a Horizon League series against Butler in their only action last week.  The first two games were both of the one-run variety, and the Bulldogs took both of them, 4-3 and 3-2, before Valpo rebounded in a big way with a 12-2 victory in the finale.  Katie Williams hit .500 for the Crusaders over the three games, while Karen Korb tallied five hits, three runs and three stolen bases.

Gearing Up for the League Tournament: Valparaiso enters the final weekend of Horizon League action in fourth place in the league standings.  The Crusaders are tied with both fifth-place Loyola and sixth-place Butler in terms of games back, but are percentage points ahead of both squads since they have played fewer games.  Valpo must win at least two of its three games against Cleveland State this weekend to remain ahead of Butler, which is finished with its league slate, and must match Loyola’s performance this weekend to stay ahead of the Ramblers.

Mr. 300: Crusader head coach Randy Schneider will be coaching his 300th game at Valpo in the nightcap Tuesday against IPFW.  The longest-tenured coach in Valpo softball history, Schneider is also the program’s all-time leader in victories.

Keep On Crossing the Plate: This year’s incarnation of the Crusaders has been by far Schneider’s most proficient at scoring runs to date.  The 2007 squad, which was the highest-scoring team in Schneider’s tenure entering this year, averaged 4.39 runs/game, but this year’s team is averaging 5.19 runs/game.  The 2009 squad has already scored a program-record 223 runs with at least nine games remaining.  Individually, Sara Strickland (40) and Karen Korb (36) are 1-2 on Valpo’s single-season runs scored chart, while Ashley Wolter (26) is also within reach of making the top-five by the end of the year.

Thievery Abounds: The Crusaders earned an NCAA statistical plaque in 2008, leading all of Division I softball with an average of 2.57 stolen bases/game, and this year’s squad has been even more aggressive on the basepaths.  The Crusaders are averaging 2.79 steals/contest, second in the nation behind only Alabama.  Their 120 total steals are already second-most in a single campaign in program history.  Karen Korb has already broken her own single-season mark for steals, swiping 32 to date, and ranks among the top-ten in the nation in steals/game, while Sara Strickland has stolen 24 bags, third in the league and in a single season all-time at Valpo.

Korb Breaks Some More Records: Senior Karen Korb continues to make her mark on the Crusader record book yet again this year.  Korb scored three runs over Valpo’s three games last week, giving her 96 career runs scored, the most in program history.  She also broke her own single-season record for stolen bases in the opener against the Bulldogs and now has 32 thefts on the year.  Korb is also second in a single season in runs scored and fifth in hits, and has moved into Valpo’s career top-five in games played, at bats and hits.

Wolter Goes Deep Again: Senior Ashley Wolter launched her 21st career home run, improving her Crusader career record, on Thursday at Butler.  The grand slam in the first inning of the nightcap gave her 33 RBIs on the season, setting a new Valpo single-season standard, and was her eighth long ball of the 2009 campaign, just one shy of the Crusader single-season record in the category.  Wolter, who is batting at a .341 clip this year, now has 85 career RBIs, just three shy of the Valpo all-time record.

Strickland’s Sensational Freshman Year: Freshman Sara Strickland is putting together a remarkable rookie campaign.  She currently leads the Crusaders with a .374 batting average, good for fifth in the league, and 40 runs scored, second in the Horizon League and already a Valpo single-season record.  She also finds herself third in the league with 24 stolen bases, third-most in a single year in Crusader history, and second in the league with 13 doubles, tied for second-most in one year all-time at Valpo.  Strickland is also among the top-ten in the league in on-base pct., slugging pct., hits, total bases and walks.

Ichiyama Rakes at the Plate: Freshman Joylyn Ichiyama stood out for the Crusaders last Thursday against Butler, having herself a five-hit day over the doubleheader.  Included among her five base knocks was her fourth home run of the season.  She also drove in a pair of runs on the day, giving her ten RBIs in the 15 Horizon League contests she has played in.  The freshman, who is hitting .356 in league play, is batting .313 overall this year and has driven in 22 total runs, tied for second among the Crusaders.

Quickly: Karen Korb earned her second Horizon League Scholar-Athlete of the Week honor of the season and third of her career last week ... Korb was also recognized last week as the winner of Valpo’s Laurel Award (presented to Crusader senior student-athlete with highest cumulative GPA) ... Every Crusader regular is batting between .278 and .377 in Horizon League play ... Katie Williams tallied four hits over the three games last week, raising her average 74 points ... Jamie Weinburger moved into fifth in Crusader history in career stolen bases last week (28) ... Every Crusader starter had at least one hit in the series finale against the Bulldogs ... Shaleigh Jansen earned the win in the finale, her first career start against a Horizon League school ... Jansen is now 3-0 with a 0.78 ERA in league play this year.