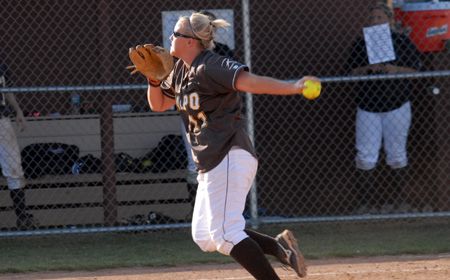 Setting the Scene: Valparaiso enters the 2009 Horizon League Softball Championships as the sixth seed, opening the tournament with a matchup against seventh-seeded Green Bay on Thursday morning.  The Crusaders are looking for their first postseason win as a member of the Horizon League.

Series History: Green Bay - Valparaiso holds a 3-15 record all-time against the Phoenix.  The two squads have met up three times since Valpo joined the Horizon League, including a split doubleheader this year in Green Bay.  The Phoenix won the opener 6-5 in nine innings before the Crusaders earned a 3-0 win in the nightcap.
UIC - The Flames hold a 48-7 advantage in the all-time series, and won the last meeting in last year’s league tournament by a 2-0 score.
Butler - Valpo holds the edge in the series, 17-12, but the Bulldogs took two of three from the Crusaders this year in Indianapolis.
Youngstown State - The Crusaders improved to 13-5 all-time against the Penguins with a tripleheader sweep this season.
Cleveland State - CSU leads, 11-5
Detroit - Series tied, 17-17
Loyola - Loyola leads, 29-17
Wright State - Valpo leads, 9-6

Previously in Valpo Softball: Six games were scheduled last week, but the Crusaders were able only to play a three-game set against Cleveland State, as a twinbill against IPFW and a single game versus top-20 DePaul were rained out.  Valpo was unable to come up with a win against the Vikings, as CSU swept Saturday’s doubleheader by scores of 6-2 and 10-5 before taking the series finale on Sunday, 7-1.

Tournaments Past: Valparaiso is still searching for its first win in Horizon League Championship action.  The Crusaders entered the 2008 tournament as the second seed after falling just one game shy of the regular season title, but were eliminated in two games, falling to fifth-seeded UIC (2-0) and sixth-seeded Green Bay (8-1).  But when entering as an underdog, Valpo has shown it can make some noise.  The Crusaders entered the 2004 Mid-Con Tournament as the fourth and lowest seed of the four teams that made the bracket, but ended up advancing all the way to the conference title game before falling to Centenary.

Winningest Class in Crusader History: While the 2009 senior class of Steph Kelly, Karen Korb, Katie Williams and Ashley Wolter hopes to cement their legacy this weekend with a tournament title, the quartet has already been the most successful in school history.  Valparaiso has won 103 games over their four years in the program, the most wins by any four-year class in Crusader softball history.  The quartet has also helped guide Valpo through the transition into the Horizon League.

Rewriting the Record Book: The 2009 Crusader squad is in the process of completely rewriting the program record book on the offensive side of the ledger.  This year’s team has set new single-season marks for runs scored (231), hits (393), home runs (29), RBIs (197), total bases (554), sacrifice flies (16) and stolen bases (127), and is on pace to set new records in batting average (.311), on-base percentage (.371) and slugging percentage (.438).  The Crusaders are also just eight doubles shy of matching the team single-season mark in that category.

Keep On Crossing the Plate: This year’s incarnation of the Crusaders has been by far Schneider’s most proficient at scoring runs to date.  The 2007 squad, which was the highest-scoring team in Schneider’s tenure entering this year, averaged 4.39 runs/game, but this year’s team is averaging 5.02 runs/game.  The 2009 squad has already scored a program-record 231 runs and has been shut out just twice on the season.  Individually, Sara Strickland (42) and Karen Korb (39) are 1-2 on Valpo’s single-season runs scored chart, while Ashley Wolter (27) is also within reach of making the top-five by the end of the season.

Thievery Abounds: The Crusaders earned an NCAA statistical plaque in 2008, leading all of Division I softball with an average of 2.57 stolen bases/game, and this year’s squad has been even more aggressive on the basepaths.  The Crusaders are averaging 2.76 steals/contest, second in the nation behind only Alabama.  Last weekend, the Crusaders swiped seven bases, setting a new team single-season record with 127 steals, breaking last year’s mark.  Karen Korb has already broken her own single-season mark for steals, swiping 33 to date, and ranks among the top-ten in the nation in steals/game, while Sara Strickland has stolen 27 bags, second in the league and third in a single season all-time at Valpo.

Strickland’s Sensational Freshman Year: Freshman Sara Strickland was honored by the Valparaiso SAAC as the athletic department’s Female Newcomer of the Year after her spectacular rookie campaign.  Strickland set Valpo’s single-season runs scored record earlier this year and has now crossed the plate 42 times this season.  She also has led the Crusaders at the plate throughout the season and enters the tournament hitting a team-best .376, good for fourth in the Horizon League.  She ranks among the top-five in Valpo single-season history in hits, doubles, stolen bases and total bases, and is among the league’s top-five in on-base percentage, hits, doubles and steals.

Korb Runs Wild: Senior Karen Korb is closing out her Crusader career as easily the most potent threat on the basepaths in program history.  She has swiped a single-season record 33 bases this year, giving her 98 career steals, more than double anybody else in team history.  The senior, who is batting .331 this year, has also scored 39 runs, second-most in a single year all-time at Valpo, giving her 99 career runs scored, a program record.  Korb has also tallied 53 hits on the season to date, tied with Strickland for second-most in a single year in program history, just five shy of the record.

Wolter Powers Up: Senior Ashley Wolter has cemented her spot as the biggest power threat in Crusader softball history.  Wolter broke Valpo’s career home runs record earlier this year and has launched 21 long balls in her career, including eight this season, just one shy of the single-season mark.  The senior, who is hitting .340 on the year, has also driven in a team single-season record 33 runs, good for fifth in the Horizon League.  She has now totaled 85 RBIs for her career, just three shy of Valpo’s all-time record in that category.

Quickly: Six regulars enter the Horizon League Championship hitting above .300 ... Wolter has a six-game hitting streak entering the tournament ... Strickland has registered a stolen base in each of the last four games ... Sadie Conner is tied for eighth in a single year in Valpo history with 11 doubles ... Stephanie Kelly has struck out 98 batters this year in the circle, eighth-most in Crusader history ... Aubrey Sundling stole Valpo’s 127th base of the season on Sunday as a pinch-runner to break the previous school single-season mark ... sophomore Jamie Weinburger moved into fourth in Valpo history in stolen bases with her 29th steal this past weekend ... Whitney Warner tallied Valpo’s 16th sacrifice fly of the year Sunday to break the mark of 15 set in 1995 ... Korb, Wolter and Jordan Rutkowski have started every game this year, while Strickland has also appeared in every contest.