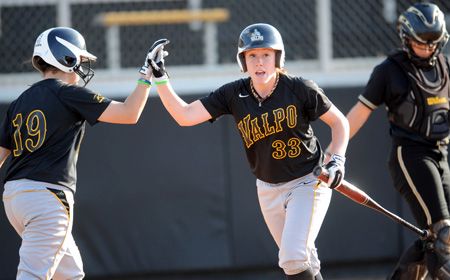 Tori Brown and the Crusaders have five games on tap this week. (Dave Schofield)
Related Links
Valparaiso (21-12, 4-2 Horizon)
Thursday, April 7 - Purdue (21-8, 2-0 Big Ten) - 3 p.m. [DH]
Saturday, April 9 - at Loyola (12-12, 3-0 Horizon) - 1 p.m. [DH]
Sunday, April 10 - at Loyola - noon
Next Up in Crusader Softball: Valparaiso closes a stretch of nine home games over 14 days with a non-league doubleheader at the Valparaiso University Softball Field on Thursday against Purdue.  The Crusaders then hit the road for a nine-day, nine-game road trip with a three-game series this weekend at Loyola.

Previously: Valpo swept a doubleheader in a pair of slugfests in non-league action at Northern Illinois (17-6, 8-5) before seeing its school record 13-game winning streak come to an end, 4-1, in the series opener against UIC.  The Crusaders evened the series with the Flames with a 5-2 win in the second game, but UIC claimed the series with a 17-6 win on Sunday.

Following the Crusaders: Live stats for all five of this week’s contests will be available through www.valpoathletics.com.  In addition, live audio of the Purdue doubleheader can be heard online or in the Valpo area on 95.1 FM, WVUR.  A live chat for the series at Loyola this weekend can also be accessed through the official Crusader website.

Series Notes: Purdue - The Boilermakers own a 23-8-1 advantage in the all-time series against Valpo, but are just 6-5-1 against the Crusaders over the last seven seasons.  Purdue swept a doubleheader in West Lafayette on Apr. 15, 2010 by scores of 5-3 and 9-0 in the most recent meetings between the two squads.  Kelsey Phalen and Sara Strickland both had multiple hits against the Boilermakers in last year’s twinbill.
Loyola - The Ramblers are 30-19 all-time against Valpo, but the Crusaders own a 5-4 edge since joining the Horizon League.  The Crusaders swept a home doubleheader last season on Apr. 24 by scores of 4-0 and 9-1 before game three of the series got rained out.  Sadie Conner went 4-for-6 with two doubles and a homer over last year’s pair of games, while Alex Lagesse tossed a three-hit shutout in the opener.

Lucky 13: Valparaiso’s winning streak finally came to an end in the opening game of a doubleheader this past Saturday against UIC, snapping the Crusaders’ string of consecutive wins at 13.  Valpo, which had not lost since a March 8 affair against South Dakota, easily surpassed the previous program record of nine straight victories, accomplished twice.

Scoreboard Gets a Workout: Valpo’s five games last week tested the scoreboard in DeKalb and at home, as the Crusaders combined with their opposition for 71 runs over the five games.  Included among last week’s results was a 17-6 victory over Northern llinois, matching the third-most runs scored by a Valpo team in program history and giving the Crusaders their first win of the year when giving up six or more runs (1-6).  On the flip side, Valpo dropped a 17-6 decision on Sunday to UIC, tying the second-most runs ever given up by the Crusaders and handing Valpo its first loss of the year when scoring six-plus runs (13-1).

A Rigorous Slate: The Crusaders had a number of challenges on their hands in the pre-league portion of the 2011 season.  11 of Valpo’s first 13 games were against squads which won at least 30 games a year ago, with six of those games were against teams which advanced to the NCAA Tournament in 2010 as well.  Valpo also took on a pair of the nation’s top-10 teams for the first time ever.  The tough competition continues in Horizon League play, as three other league squads won at least 30 games in 2010.

Run-Ruling All Comers: Valparaiso won 12 games via run rule last season, and has already run-ruled six opponents in its 21 victories this season, including an 11-2, five-inning win over Iowa State, the Crusaders’ first run-ruling of a BCS opponent in the modern era.  On the flip side, Valpo suffered its first run-rule loss of the season Sunday, in its 33rd contest of the year.

Home Field Advantage: Through seven of 17 scheduled home games at the Valparaiso University Softball Field, the Crusaders own a 5-2 record, including the program’s first ever victory over Michigan State.  The Spartans were the first of three BCS programs Valpo will host this season, as Purdue visits this week and DePaul is scheduled to come to town later this year.

Simply Perfect: Alex Lagesse threw a perfect game for the Crusaders in their Horizon League opener against Detroit Mar. 26, setting down all 15 batters she faced, eight via strikeout.  Lagesse didn’t allow a ball into the outfield after the first inning of the perfect gem, her second career no-hitter, joining a no-no against Bryant her freshman year.  The perfect game is believed to be a Crusader program first, while Lagesse becomes just the second Crusader all-time to throw multiple no-hitters, along with Laurie Pajakowski.

Raking in League Honors: While Lagesse wasn’t quite perfect in her other two outings last week, she ended the week with a perfect 3-0 record and a 0.47 ERA in her three starts, surrendering just five hits while striking out 15 in 15.0 innings of work to earn Horizon League Pitcher of the Week honors.  The honor was Lagesse’s fifth career weekly accolade from the league office, tied for fifth-most by a pitcher in league history.  The junior also became the second Crusader to earn a league weekly award this year, joining Jessie Marinec, who was named Batter of the Week on Feb. 28.

Another Week, Another Record: Junior Sara Strickland, who had already broken Valpo’s career runs scored record earlier this year, matched another career record last week in her final plate appearance of the week.  Strickland, who had her second multi-homer game of the year thanks to bombs in her first two plate appearances against UIC Sunday, ended the game with a single, giving her 251 career total bases to match the program record held by Taylor Callahan and Shannon Robinson.

...More to Follow?: Strickland is putting herself in position to break even more career records in just her third season.  Valpo’s all-time marks for doubles, hits and walks are all in danger within the coming weeks, thanks to Strickland stepping her game up another notch this season.  The junior has posted a .417/.475/.611 batting line to date this season, leads the league in hits (45), doubles (9) and total bases (66), and ranks second in on base percentage, runs scored (28) and stolen bases (13).

The Hits Kept on Coming: When freshman Angie Doerffler knocked a single into right field in the fifth inning of a win over Temple on Mar. 9, little did she or anyone else know that would be the start of a streak that would land her a place in the NCAA record book.  Starting with that hit, over the next four games and 13 days, Doerffler registered hits in nine consecutive official at-bats before flying out in the fourth inning of the opener at IUPUI Mar. 22.  Her nine straight hits is tied for ninth-most in NCAA Division I history.  She also had a pair of walks during the stretch, reaching base in 11 straight plate appearances.

Breakout Twinbull: After an All-League campaign as a junior, senior Sadie Conner had struggled in the early portion of this season, coming home from Florida with just a .211 batting average.  But in the 11 games since, Conner has gone 16-of-34 (.471) at the plate while slugging at a team-best .765 clip to raise her season average to .308.  Conner had a huge doubleheader at NIU last Wednesday, tallying a pair of three-hit games as she went 6-for-9 with six RBIs and five runs scored over the course of the twinbill.

Hitting is Contagious: Conner is far from the only Crusader to have her bat heat up since returning from Florida, as Valpo has scored 87 runs in the last 11 games and is hitting .360 as a team over that stretch.  Jordan Rutkowski is hitting .438 (14-of-32) over the last 11 contests, while KC Boldt has driven in a team-best 14 runs and Angie Doerffler has crossed the plate on 16 occasions.

Another Record in Danger: Conner’s six RBIs last week give her 80 career runs batted in, good for fourth on Valpo’s all-time chart in the category and just 12 behind Ashley Wolter’s record of 92.  But Conner is also chasing a current teammate, as Rutkowski has tallied 86 career RBIs to sit third on the same chart.  Meanwhile, Rutkowski is already eighth on Valpo’s single-season RBI chart with 27 runs driven in this year, while Boldt is right behind her in tenth with 26 RBIs.

McGee Picks Up Ws: Junior Sam McGee had a streak of seven straight starts in which she earned the victory snapped on Sunday with the loss to UIC.  But the seven straight wins already give McGee 11 victories on the 2011 campaign, tied for second-most in the Horizon League and already tied for eighth on Valpo’s single-season chart.  The junior also now has 34 career wins, fourth most in Crusader history, just two shy of third and three shy of second all-time.